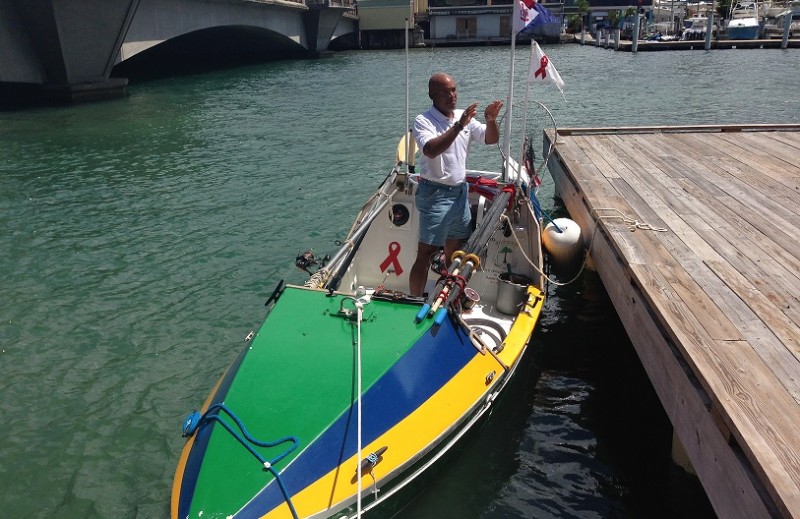 Victor Mooney and his boat, Spirit of Malabo.

Raised in Long Island, Victor Mooney’s backyard was the water. He’s been rowing since childhood, gaining even more experience during his family’s trips to the Adirondacks. The passion has gained momentum in recent years, with fascination growing around those rowers who aim high with journeys across large bodies of water. In Mooney’s case, a 5,000-mile row across the Atlantic Ocean.

Weaving his love of rowing with a cause that was dear to his heart, 48-year-old Mooney began a challenge to raise awareness about AIDS in honor of his brother who died from the disease in 1983. Mooney first attempted the transatlantic row, also known as the Goree Challenge, 10 years ago.

He is currently carrying out his fourth and final attempt of the challenge, and is making stops along the way to raise awareness about AIDS, voluntary HIV testing, and prevention, Traveling solo in his 24-foot boat, Spirit of Malabo, Mooney has faced difficulties along the way including severe weather, extreme weight loss, and shark encounters.

The row began on November 19 in Maspolamas, a town off the coast of Africa, and will end near his home in New York. Although the exact ending date is unknown because of factors such as weather, he said he’s expecting to be back sometime in November or December.

“It’s difficult because I don’t have a motor and I go where the wind takes me,” he said. “I do have to be somewhat close to land though in case I have to seek shelter.”

But Mooney described the challenges he’s faced on the open water to be minuscule in comparison to those who are living with AIDS. “Sometimes it’s hard for them to even get out of bed,” he said. “This trip has been tumultuous from the beginning. A shark even put a hole in my boat. But I can’t be mad, he was just hungry—I was hungry too. I’m just trying to keep moving, look to my faith, and be positive.”

“I think at this point, it’s bigger than me, bigger than my brother, because so many people are dealing with this global issue of AIDS,” he said. “Sometimes, there are sad moments in the boat, but I just have to remember why I’m here and stay focused—try to share a positive message.”

In addition to staying focused on why he first decided to go through with the challenge, Mooney said it’s the people who have supported him along the way that provide a great deal of motivation.

He shared a story about a group of students from a charter school in The Bronx who gave up classroom treats like candy for months in order to help raise funds to sponsor the rower. “I’ll never forget that,” he said. “These are kids who are dealing with plenty of their own emotional issues at home. They’re amazing.”

To provide Mooney with even more motivation to row, his wife is back at home awaiting his return. “We talk on the phone and she tells me to get home as quickly as I can, but to be safe,” he said. “When I get to the Brooklyn Bridge, I have no idea what’s going to happen, but it has my heart bubbling.”

When I spoke with Mooney on Tuesday, he had just arrived in Puerto Rico and was resting in preparation for the next leg of his trip. Despite exhaustion and extreme weather, he’s the kind of guy who maintains high spirits in the face of a challenge.

“We still have a ways to go, but the whole point is to never give up,” he said. “We’re 25 years into this war on AIDS and everyone is doing something to spread awareness, medication, and at least stop the discrimination. We need to find a cure for AIDS, and the research is continuing.”