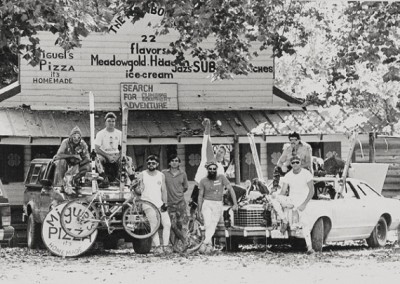 Back in the ice cream days.

It’s in almost every climbing gym in the United States. Its face smiles on from the sides of water bottles, beaming from climbers’ backs as they ascend.

The sun-faced logo that represents Miguel’s Pizza at the Red is a familiar one to climbers, and the store itself is a cornerstone for those who make the trip to Natural Bridge State Resort Park and Red River Gorge in east-central Kentucky.

The shop, opened by Miguel Ventura 30 years ago in Slade, Kentucky, was originally an ice cream shop called The Rainbow Door. At the time, the Gorge was quiet and few climbers passed through. It was around then when a small group of climbers stopped by and asked if they could pitch their tents out back for a small fee (that hasn’t raised in price since). The crowd started to grow, and every weekend there would be a group of 15-20 climbers with tents pitched out behind the shop. Sick of eating camp food, they were the driving force behind The Rainbow Door becoming a pizza shop.

It was 1986 when they made the switch to pizza, and now the shop is open for breakfast, lunch, and dinner. Eight years later, climber Porter Jarrard started frequenting Miguel’s. He slept on Ventura’s couch and soon became part of the family. With him he brought the potential for the Red to become a climbing mecca, and from there the crowds kept getting bigger and bigger.

Now, a weekend at Miguel’s has more than a few tents. A hundred or more can be spotted in the backyard of Miguel’s, and the price to camp is still only $2.

The area that surrounds Miguel’s is characterized by the two main geological attractions, and the adventurers that come for them. Natural Bridge State Resort Park has massive rock formations, including the famous natural arch, which the park is named after. There are 35 miles of trails to hike as well as plenty of camping, canoeing, kayaking, and fishing opportunities. The area is surrounded by hills, tightly wound with trees.

Red River Gorge is a close neighbor to the arch, located in the Daniel Boone National Forest, and serves as a home away from home for climbers all over the country. The sandstone walls make any climber’s hands sweat just thinking about them, and for good reason. There are more than 100 arches in the area, and the crags offer up climbing opportunities for new and seasoned climbers alike.

Miguel’s serves as a climbing haven at the Red for many reasons. Inside the small old shop is pizza, yes, but also a fully-stocked gear shop. A dropped quickdraw can be easily replaced inside, and the gear shop is getting ready to move next door to free up some space in the restaurant. The gear shop is set to open October 11, according to Dario Ventura, Miguel’s son. The shop will be taking the place of Dario’s grandfather’s house.

Dario was raised at the Red, literally. He was homeschooled and began climbing at the age of six. “Our life revolves around climbing,” he said, mentioning he was heavily influenced by the climbers he grew up around. “We have 22 staff that work seasonally, and everyone is a climber—doesn’t get much more core.”

He explained that all day you’re talking to climbers about climbing, and when a staff member gets off work, the conversation often stays on the subject—or takes you there. It’s a bubble in the middle of Kentucky that caters to, and is all about, climbing.

Jeff Hageman, a climber from metro Detroit, has been making the trek down to Miguel’s for six or seven years now. He calls it his home away from home.

“Everybody that is there is there for the same reason,” he said. “You can be with people from all over the world, I don’t think I’ve been down there without hearing four or five different languages.”

Not only does the wide range of people appeal, but the price is a drawing point for many. For Hageman, getting from Michigan to Kentucky can become expensive, and a cheap place to stay is important.

Will Black, a climber for three years working at Climbmax, a gym in Asheville, agreed the price makes a difference. He said it’s perfect for a climber on a budget.

But it’s more than the pizza, the price, and the location that makes Miguel’s such a cornerstone for climbers. When Black first heard mention of Miguel’s, he said, “I love that place!” That isn’t just because of the affordable food. There’s something else wedged between the floorboards of Miguel’s that keeps climbers returning.

For Hageman, it’s the thrill of being surrounded by so many other climbers who share the same passion. “I think it’s the environment and the excitement that you’re camping with hundreds of climbers,” he said. “You almost get this crazy vibe where you feed off everyone’s energy.” Hageman is an artist, and compared it to the energy he gets from working in a studio. It’s the comfort, the friendliness, and the camaraderie that gets him to come back. Few other places would he feel comfortable leaving gear in a campground with hundreds of people. There’s a level of trust and understanding that’s mutually translated.

For Black, he said it’s because Miguel’s has been there for so long and has observed the climbing scene grow and evolve. “They want to be part of the climbing community in a way that others aren’t,” he said. The staff is friendly and helpful, and the family-run style is comfortable.

For Dario Ventura, it’s hard to put into words. “I just [think] that we believed in climbing way before most people did, the entire industry,” he explained. “We were one of the first people that were actually thinking you could possibly make a living off of rock climbing.” In the 90s, it wasn’t as popular and a climbing career would have been unheard of. The crowd then was different too, but they kept welcoming anyone who came through the colorful door. Miguel’s is genuine, and the atmosphere there is created only because of the people who inhabit it.

“We don’t really try to make a vibe, it’s self produced and people appreciate that because it’s real,” he said.