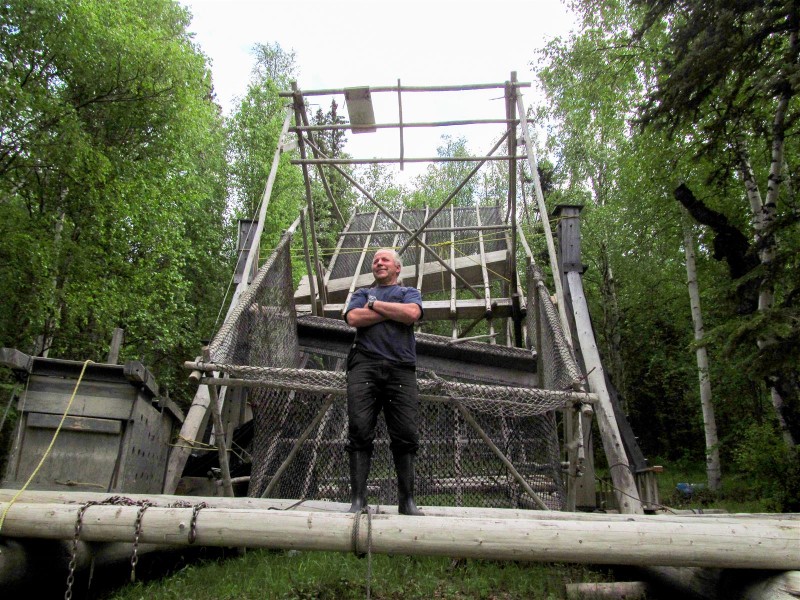 Tanana, Alaska is located about 60 miles from the Arctic Circle. The isolated town with no roads in or out has a population of 200, comprised of residents who know how to survive in severe conditions. The challenging lifestyle is shown in Discovery Channel’s Yukon Men, which began its third season on September 2. I recently talked to Stan Zuray, one of the show’s main characters, to learn more about what it takes to survive in the climate, and why he chooses to stay despite the struggles.

Can you provide a summary of what everyday life is like in Tanana?

Tanana is different for everyone. A school teacher from the states who comes to work here may never set foot in a boat all summer—or eat a fish strip or get on a dog sled. But for some, it’s a constant avoidance of steady real work and instead making wood rafts for sale and your winter heat. One day trapping for fur and then hunting for moose or making a fishwheel. Being your own boss and being kinda poor and just getting by. For me it never stops—no days off ever—my days off mean I get to catch up on getting a dog pot made or turning my fish on the racks or fixing something I’ve looked at broken for months. There is this family joke—the family has sometimes bought me hammocks for Father’s Day over the years. I set them up and lay in it for two minutes and never again. I say if I got time to [lay] around, I got time to go to bed and sleep and get rested for the work ahead. Everyone is different.

What does the construction of a new road mean for the community?

My opinion is it’ll mean some access to get supplies in, but more often than not it’ll mean trucks bought and beat to death on the long gravel road to the city and no money really saved and often more wasted. I didn’t come to Tanana cause there was a road here—I left roads long ago.

What are some of the challenges the area faces in terms of resources?

The modern world is coming as it always has. The king salmon crisis has changed the game more than anything. It’s not really a government ban. It’s really the state management doing what it should have done long ago but now doing it too late to help. Fishcamp lifestyle has gone down the drain. Anyone who thinks otherwise has not been on the Yukon River lately and seen all the closed camps. Camps that once raised kids and taught traditional values impossible to do any other way. It’s a sign of the times I’m afraid, but then it’s society’s direction since very long ago. That’s why I like the show—it shows the value of the lifestyle if you can look behind the drama and maybe will make someone think about what’s important in life.

[The show] has been an opportunity for many townspeople and the majority of people here like the show and what it’s done for the portrayal of the lifestyle. I personally did it to showcase what I viewed as a meaningful, hardworking, ethical lifestyle and to let people not from Alaska see it for what it is and not all the misconceptions of us as poachers and cruel trappers. I always felt that if people could see what we really do, while they may not like it, they could at least understand the value of it as a lifestyle.

Where else have you lived and do you ever think about moving away because of the struggles?

I lived in New Hampshire at a hippie commune, west coast all over, into Canada and northern British Columbia, in the woods living similar to Alaska. There is no place to move to better than here—I’ll just stay on the outskirts of all the outside activity as I’ve kinda been doing anyway. Maybe if I was younger I would go to Siberia.

What skills must one have to live in Tanana?

You can live in Tanana in different ways. If you want to be “Yukon Men,” however, you got to want to do the walk. Or better put, you have to not want to do the other walk. I feel I’m a lazy man, really—I just hate living any other way so much I have to work hard to avoid it. Really I just want to lay around all day. Second thing that would help is some skills of making things or mechanics or fixing things. These things however will [be learned] along the way if you don’t have them when you get here. Like when it’s 30 below and your SnoGo breaks down 30 miles from town, you’ll be amazed at how good your walking skills will get.

Check out the season three sneak peek below: