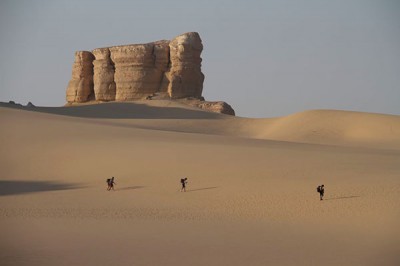 Learning why ultrarunners do what they do—that was the motivation behind Jennifer Steinman’s film, Desert Runners. It’s something most people have a hard time relating to, even fellow athletes. Running for hours on end in the middle of some of the hottest deserts in the world, all while carrying every piece of gear you’ll need along the way in a 20-pound pack—that’s the 4 Deserts Race Series.

The series takes participants to four deserts—the Atacama Crossing (Chile), the Gobi March (China), the Sahara Race (Egypt), and The Last Desert (Antarctica), and each of those covers 250 kilometers of rough terrain that spans over seven days. Each day, runners are provided with a shared tent to sleep in and enough water to drink, but that’s it. Those featured in the film went above and beyond simply aiming to complete the four deserts, but rather worked toward the 4 Deserts Grand Slam, which requires runners to complete all four within one year.

After meeting a runner at a conference who announced he would be attempting the feat in 2010, Steinman set out to document his journey. Dave was over 50. He was a bit lanky. To be honest, he didn’t appear to be a super athlete, but the filmmaker was intrigued all the same.

Having never heard of races such as this before, Steinman questioned why anyone would want to put their body through such extreme conditions. “I couldn’t believe there were races like this that existed, and more so, that there were people who wanted to do them,” she recalled. “But after meeting Dave, I was really interested in learning about these perceived limitations we put on ourselves.”

It wasn’t long before the filmmaker convinced Dave that his story could be a great documentary. It was just Steinman and one colleague doing the filming, and the idea was to center the film on Dave’s attempt at the Grand Slam. But upon reaching the first desert, Dave laughed while revealing to the two that he “hadn’t trained that much.” While his sense of humor was one of the main reasons he was ideal for the role of a main character, the filmmaker was worried.

“[Dave] walked away and I turned to my cameraman and said, ‘Oh my god, he’s not going to make it. We flew all the way to Chile to film this guy, and he’s going to be out on the second day. We’re going to have nothing,'” she recalled. “So we started talking to everyone. At that point we didn’t have funding yet for all four of the deserts. But once we got more funding, it became a story about those runners who were aiming for the Grand Slam.”

Despite his relaxed attitude, Dave succeeded. And so did a number of others, all non-professional athletes at the time, who ended up being featured in the film. One such runner was Samantha Gash, an Australian in her 20s who was attending law school at the time of the races.

“I didn’t know anyone else who was an ultrarunner at the time, so I didn’t really know how to train,” she said. “I knew I’d have to train for many consecutive days, but the biggest thing was knowing I’d have to carry all of my [gear] on my back. I’m just under five feet and I kept thinking about what it would be like to have 20 percent of my body weight carried on my back.

“To be honest, I didn’t know what I was doing. I made it up along the way.”

Despite Gash’s modesty when discussing her training schedule, she did in fact prepare quite thoroughly. Aside from running, hot yoga was a huge part of her preparation, especially after she was injured between the second and third races. Not only was the stretching excellent for the reduction of injuries during each race, but the heat helped her adjust to desert temperatures, as well as readied her mind for the challenges the race would present. Training your mind is more beneficial than anything else, she admitted.

While watching the documentary, it’s easy to see the struggles the athletes faced, but that’s just a sliver of the actual hours upon hours they spent running. As for what got her through the most challenging times, Gash said it was the people and being able to focus her mind on the positive.

“I suppose it was being able to share the pain sometimes with others that helped alleviate it,” she said. “You would build these incredible friendships, but then sometimes you’d want to be alone in your thoughts. It was a variety through the races. My strategy was to try to file away the pain and keep myself focused on all the things I could control to make the experience easier, like my breathing, drinking enough water, eating enough. I kept all of that stuff really regimented.”

As a self-described control freak, Gash said it was difficult for her to embrace the unexpected. “But when you come to these races, everything always changes. It’s all going to fall apart,” she said. “I was constantly having these freak out moments because nothing was ever going as planned.” Once she was able to adjust to the constant shifts, the whole process became more doable.

“Your brain is filled with so much stuff while you’re out there,” she said. “Whenever it got really hard, I just had to remind myself why I chose to be out there and make the most of the opportunity. I was running in these locations that most people don’t ever get to visit.”

But some runners were plagued with more than just exhaustion and negative thoughts. During the filming process, Steinman said it was imperative for she and her cameraman to remain as objective as possible, even during extreme situations.

“We tried to be as neutral as possible. The race organizers really ask that you don’t interfere with the race in any way, so we never helped runners,” she recalled. “We tried to just observe, but they became our friends—we all bonded really quickly.”

Remaining behind the camera was not always possible. At one point, one of the runners, Ricky, became so exhausted on the route that he yelled to the camera crew that they should stay near him, as he didn’t think he’d make it much longer. During that particular race, Ricky could not keep down any food or water and was vomiting for days.

“We often talk about what would have happened had we not been there,” she reflected. “He was roaming around in the middle of the desert. There was a point where we really thought he was going to die.”

Above all, Steinman said, “At the end of the day, I’m a person first. You can’t deny that you’re out there.”

It was situations such as the one with Ricky that made the filmmaker even more enthralled with learning why athletes wanted to push themselves this far. “We were all out there for very different reasons,” Gash said. “We just wanted to explore and see what we were capable of.”

The whole thing was definitely a once in a lifetime opportunity, Steinman said. Now, the film is in the promotional stage and is being screened all over the world. As for Steinman’s plans for the future of her filmmaking, she has a few projects in the works and said she’s constantly on the lookout for new stories to share.

Since the filming ended, Gash said running has become an even larger part of her life. She’s completed several additional ultrarunning expeditions and has more planned for the near future.

“In Desert Runners, it was about me learning how to use my body, then my mind,” she said. “Now, once I realized I could push myself to the limit, I’ve started using my running to raise money for a number [of organizations]. Rather than racing, I love the idea of expeditions and a bigger purpose.

“If you had asked me five years ago if I planned to run these races, I would have laughed at you,” Gash said. “For many people, they’re afraid of going into the unknown. But that’s the greatest growth you can have as a human being. It doesn’t have to be running, but just exposing yourself to situations you’re not familiar with. I just believed I could do it. Whether that was foolish or not, you might as well believe in yourself. What do you have to lose?”

The film is now available on DVD and digital download, and make sure to enter the code “RUNNERS” to receive a 10 percent discount.

Check out the trailer for Desert Runners below: