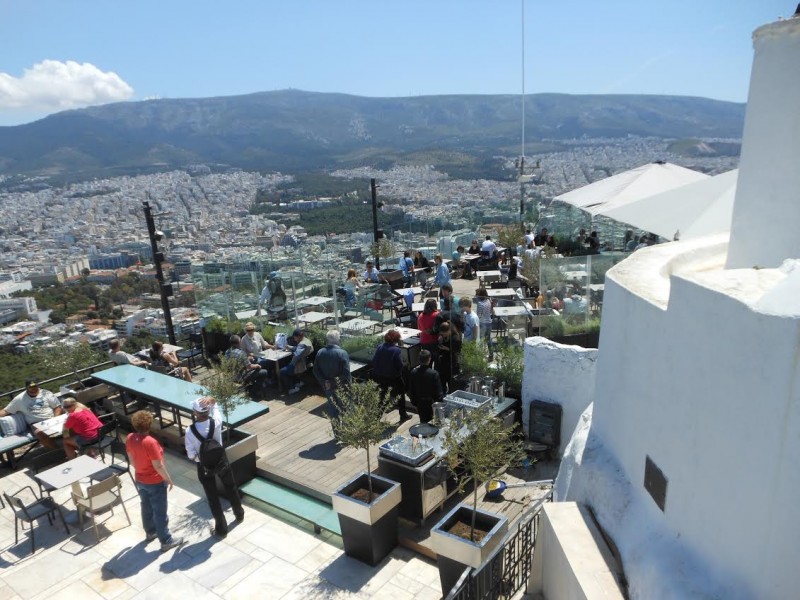 Lycabettus Hill (on the right) is the other hill in Athens. The ancient Acropolis is on the left.

From almost anywhere in the sprawling city along the Aegean Sea, it is a natural landmark.

Many a sole has tread its top. It’s easy for dollars to leave wallets to purchase a taste or a trinket. And the views are spectacular.

I’m not talking about the Acropolis.

This is Lycabettus Hill, that not only towers over Athens, but the Acropolis too. Think of it as the in-city hill of Athens, set atop the Kolonaki quarter’s chic neighborhoods and stores.

The centrally-located 900-foot hill, also called Lykavittos Hill, is a place you won’t be alone. There’s a church and taverna on top. Just below the summit is a modern amphitheater, and if you’re feeling kind of lazy, rejoice. Take the funicular from Ploutarchou and Aristippou streets.

It sees a swell of humanity on holidays like Clean Monday (the first day of Lent in the Greek Orthodox Church) when Greek families use the spot to fly kites. And on May Day.

Clean Monday I kind of knew about, but I had no clue May 1 would be such a busy time. No pre-vacation research revealed that key archaeological sites throughout the country like the Acropolis are closed. Portions of public transportation had the day off. So did offices and stores.

We walked from our excellent two-story rented apartment in the old Plaka neighborhood I found through airbnb.com about a block from the New Acropolis Museum (closed too for the day) for busy Syndagma Square.

Words my wife Jan and I couldn’t understand blared through speakers as we got closer to the hub of Athens politics, an area with the Parliament building on the uphill side. Barricades closed off streets. Demonstrators were preparing to march. Carrying placards and many wearing identical clothing, most wore black gloves and held their arms high above their heads.

The hill is a fine place to tower above the Attica Basin.

We held hands, senses heightened, and meandered through the moving sea of humanity.

As it was explained to me later, the day is big on demonstrations, and the demonstrators were unionized workers akin to the AFL-CIO expressing solidarity.

Armed with a map, a few words of Greek and always on the hunt for English speakers (really easy to find), we left the movement behind and made our way along deserted and shaded streets to a residential zone and the pathway up the hill from Aristippou Street with its many well-placed benches.

Initially dirt and shaded, the trees vanished all too quickly and the trail turned to pavement. Shade was replaced by sun, cacti, and agave trees. There is much graffiti in Athens, much of it political I was told because of the economic woes of the country, and some of it found its way on one of those odd English signs you find while traveling that warned trekkers about possible greasy conditions. “Caution Slippery Floor,” it read.

We heard a smattering of languages and saw people in all sorts of footwear and clothing on the 25-minute trek to the top.

And we saw a new spin on, at least for us, declaring your love with initials not carved into trees, but into the cacti.

The summit was humming and shade was in short supply. A vendor with church-related items for sale took up most of the shade from a lone tree. The international crowd snapped away with their various devices outside the small, white chapel of St. George. Those escaping the sun found solace in the overpriced restaurant. We explored the summit, venturing a short way down its other side by an amphitheater and some shady pines.

But from the summit, the seas swell from the Aegean to the sea of sprawl made by man across the Attica Basin. There are also wonderful views of Piraeus Port and the mountains of the Peloponnese.

Of course, it’s probably best to make the trek in early evening for the sunset.