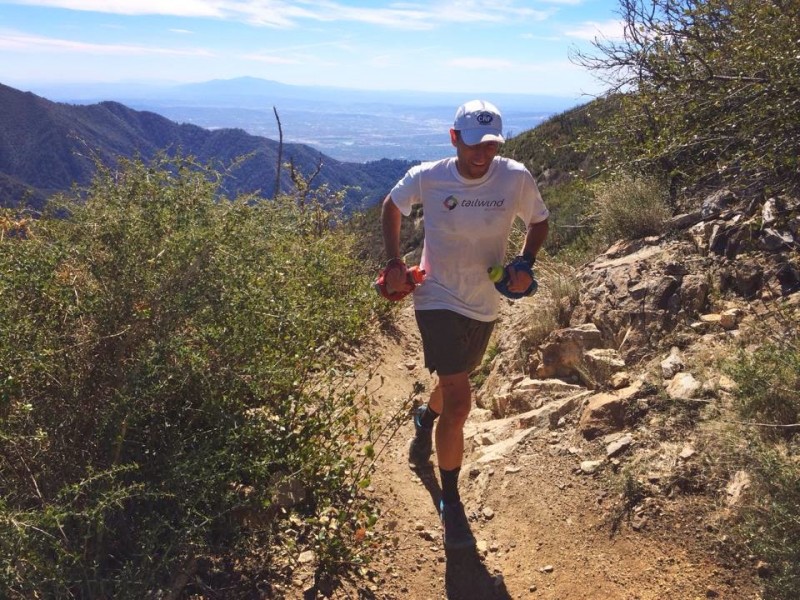 Josh trains for his ultramarathons in the mountains around Los Angeles.

Every runner’s story is different. For Josh Spector, the road to ultrarunning was a long and gradual one. “I was not an athlete growing up,” he said. “I played rugby in college and ran casually, but that was about it.” But in 1996, Spector’s roommate decided to sign them both up for the Austin Marathon, and thus began his endurance career.

Though he admitted he undertrained, he discovered he could push himself past the limits he had previously believed possible. After a few years, he signed up for his first triathlon, then an Ironman, and finally his first ultra—the JFK 50 in Maryland. “That was my first experience with ultramarathons and I wasn’t prepared,” he said. “I suffered. But I still had a good time. I found that the longer that I went the more fun I had. It was endurance that was my strength.”

For runners deciding whether or not to do an ultramarathon, Spector said there’s one key difference to keep in mind. Instead of a short, intense burst of activity and pain, which Spector said he personally doesn’t love, ultras require a different type of mental and physical strength. “I don’t race to be the fastest,” he explained. “I want to do the best I can, which is why I never choose to stop and sleep during a race. The trick is to commit yourself to keep moving forward at all times, and in most cases you can get to the finish line.”

After a few 50-mile runs, a move to the Los Angeles area prompted Spector’s interest in 100-mile races. These races had begun to gain popularity and a variety of options had been popping up all over the country. But Los Angeles hosted one of the toughest and most prestigious events, the Angeles Crest 100. He decided to sign up. Crossing the finish line wasn’t easy, but he credits his ability to power through that first 100 to the running club he had recently joined, as well as the coaches who taught him not only proper training techniques, but proper nutrition.

Josh crossing the finish line of the Brazil 135 with his brother, Aaron.

Training for the unthinkable

“The longer the race, the more important nutrition becomes,” he said, when asked about the best ways to prepare for an ultra. “Where I can make some mistakes in a two- or three-hour race, when you are tackling 23 hours, you will pay for not having a plan.” Though everyone is different, he said it’s essential to learn what nutrition and hydration works for you and have a plan to follow before you hit the trail. “I did a race once that ended up being hotter than I thought. By mile 38 I was a walking zombie. I physically couldn’t run,” he recalled. “Luckily, I made it to an aid station and was able to refuel and rest a bit, but I learned if you’re not prepared, you will really pay for it.”

Spector also warned against improper training, though he admits training for an ultra is a much different task than training for a marathon. Whereas marathon runners can realistically run 20 miles, or even the full 26.2-mile distance in the course of one training session, ultrarunners are not afforded the ability to run 90 miles consistently. “Not only would it take too long, the recovery time would hinder your training,” he said. Instead, he sticks to a schedule of back-to-back long runs. “This weekend I got up and did 26 miles in the mountains on Saturday. The trick is to wake up the next morning when I still feel stiff and dehydrated from Saturday’s run and get out and run another 21 to 22 miles.”

Josh also runs in varied conditions and at varied times of the day so he can mentally prepare himself for all the different factors that may present themselves. “You never know until you do it how you are going to react to the sun coming up or going down, or being alone for that long,” he said. “The trick is knowing that you can get through the down points, and that there will be up points in the future.”

Josh and some of his local running friends at the top of Mt. San Jacinto.

Josh attributes his obsession with ultrarunning to the feeling of self-worth and self-confidence he gets every time he reaches a goal. That drive to reach the finish line no matter what is a great lesson that has carried through to the rest of his life. But there are many other benefits to taking on an ultra.

“I love how much time I get to spend outside,” he said. “I can explore the mountain ranges and run in and around L.A. at least once or twice a week. You really get to appreciate the beauty of the area, and it’s a great getaway from normal life.”

Endurance racing’s newfound popularity has fostered the creation of a community of individuals that Spector enjoys sharing his experiences with. “When I ran the Brazil 135, it was so cool getting to meet all the people. The race organizers and volunteers were amazing,” he said. “And I also got to meet some really awesome international runners. Plus, for that race, my brother came to cheer me on, so I really enjoyed getting to spend time with him.”

Why it’s worth it

Spector knows the lifestyle of an ultrarunner isn’t one he can maintain forever. Taking full weekends away from his family and friends is stressful, and once he and his wife decide to have children, he knows he will have to take a step back. But for now, he has found a way to strike the balance between work, a social life, and running in a way that’s truly impressive. “It’s not easy.” he explained. “I try to balance by making sure the time that I spend with my family and non-running friends is quality time, but I know that I’m lucky. My wife is the most forgiving and tolerant person I know.”

As for the physical pain, he said the little sores and injuries he has endured is nothing in comparison to the strength and toughness he has gained. “It takes time and dedication, but if you prepare, I really believe almost anyone can do it,” he said.

Spector’s next challenge will be the Badwater 135, a race he’s had his eye on for years because of its billing as “the world’s toughest foot race.” He is also raising funds for the Challenged Athletes Foundation.

After that, he’s not sure what’s next, but one thing is definite—he has no plans to retire his running shoes anytime soon. “For now, I am just going to keep racing and looking for new challenges,” he said. “I see 60-, 70-, [and] 80-year-olds doing ultras and I think, ‘if I can still do it at that age, I really hope I will be.’ I hope [endurance racing] will always be a part of my life.”

To learn more about Spector and his journey to this year’s Badwater 135, visit his donation page or his website.

Check out the video of his first 135-mile marathon, which he filmed for Buzzfeed, below. Josh used a GoPro to catch footage of about half the race since the camera did not film well at night.