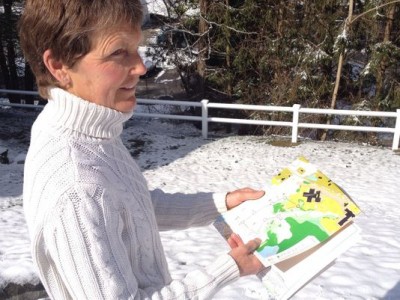 It all started as a treasure hunt.

While brainstorming ways to get students enrolled in adaptive physical education interested in the class, Nancy Kelly discovered orienteering. The outdoor activity is a test of navigation, requiring users to develop expert map and compass skills in order to move from one “control point” to another. Similar to geocaching, orienteering can involve using exact coordinates through a GPS, but is done with a map and compass in its simplest form. Because she has an entire class of students involved, the activity is usually a timed competition.

“Sometimes it’s figuring out the best way to get from here to there,” said Kelly, who teaches at Arlington High School in Lagrangeville, New York. “If there’s a marsh, you can’t go across it. You need to find another way. It’s about precise map reading. You have to be aware.

“Students find clues in the classroom and around the building that lead them outside and eventually into the woods,” she explained.

The navigational skills students develop in her class are not only useful when it comes to the competition, but extremely beneficial for those who will be spending a great amount of time outdoors in their lifetimes. Anyone who has ever completed an extended backpacking trip knows the importance of navigation, especially when considering the harsh characteristics of nature one can face if they end up lost.

It didn’t take long for Kelly’s class to gain popularity. Other kids would see her adaptive class exploring the school and question when their class would be able to join in. “How come we can’t do that?” they would ask.

She took on the challenge of altering the class to fit the needs of her other students, and it has caught on so much in the community that Kelly has written two books about orienteering. The first, Orienteering Made Simple: An Instructional Handbook, focused on the basics. Her most recent book, Orienteering Made Simple and GPS Technology: An Instructional Handbook, was published last year and discusses changes in the activity through the use of a GPS.

“It’s absolute direction versus relative direction,” she said of a GPS and map and compass orienteering, respectively.

Kelly prefers traditional orienteering. “It’s for the purists in the sport, without any kind of technology,” she said. However, she recognizes the massive influence of technology in today’s world.

“Every kid has a phone now. They can all navigate,” she continued. “They can plug in these coordinates and find something that people hid. It’s a fun way to teach them about latitude and longitude, triangulation, and how satellites work. But everything is all based on games. It’s for those who always need to have a gadget in their hands.”

The kids in Kelly’s classes are required to put their newfound skills to the test by creating an orienteering course for the other students to follow. She said at each control point, there’s a flag and a specifically-shaped hole punch. Each team is required to use the hole punch, which is the proof about whether or not they actually made it to the location.

“It’s a fun way to go hiking,” she said of the critical thinking game. “The idea of being able to go out and look for clues, it makes it so much more fun. They really get extremely excited when they’re out doing it. Some kids hike to hike and some kids need the extra motivation. Orienteering is a great motivator.”