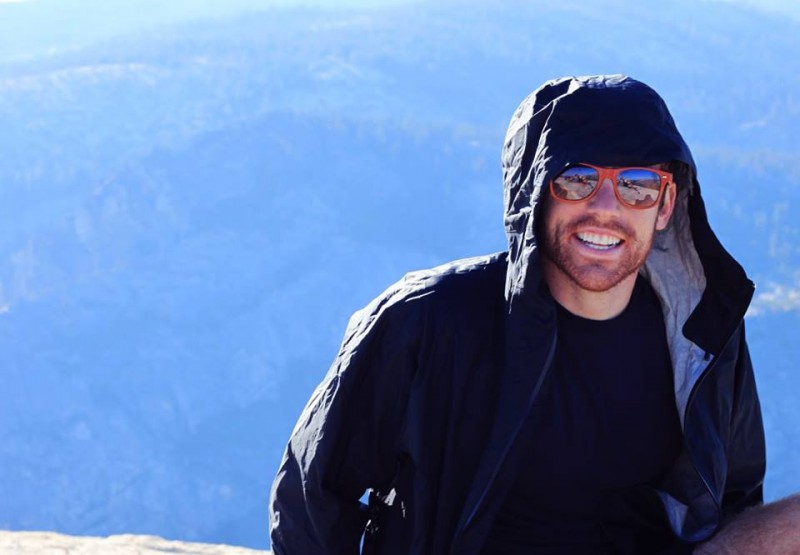 Zach began the writing process during his AT hike, using content from his blog to help create the book.

Each week, Zach Davis dedicated a loathsome 70 to 80 hours to his work in the digital marketing field. Staring numbly at his computer screen, he began to wonder what all that time would result in—he wasn’t sure he was actually working toward achieving a goal.

A few months later, Zach said his goodbyes to the corporate world and was preparing to spend five months hiking the Appalachian Trail, which runs from Springer Mountain in Georgia to Mount Katahdin in Maine. It was here he hoped to find a renewed sense of purpose in life, as well as to simply get his face away from a screen. At 2,200 miles long, the AT is a thru-hike that requires focus, persistence, and a positive mindset. Although Zach had never backpacked before, he was adamant about taking on the challenge.

Backtracking a bit, the idea to hike the AT didn’t form on its own but rather came by the advice of a friend, John, six months prior to Zach’s actual departure date.

“A friend had been making noise about hiking the Appalachian Trail for a few months, but the idea became serious after he was laid off,” he recalled. “At the time of his asking me to join him, I was two years out of school, self-employed as a digital marketer…and miserable [from] it.”

When John pitched the idea initially, Zach thought he was insane. But it didn’t take long for him to get on board, providing Zach with the realization that he too was insane.

The duo set out in March 2011, “but as is common on the AT, we ended up moving at different speeds,” Zach said. He continued on his own, but admitted there’s no amount of preparation you can complete that will resemble the reality of hiking alone for months.

“Trying to predict what it’s like to backpack for five months is impossible, at least without having a similar experience, which I hadn’t,” he said. “A prior thru-hiker friend had warned me of loneliness, isolation, boredom, homesickness, et cetera, but those were all just concepts. It was hard for me to truly understand the degree of these emotions. Until you’re a three-day walk from the closest sign of civilization with nothing but woods and the occasional hiker do you truly understand. It’s an uncomfortable transition, but once you’ve made it, you don’t want to go back.”

Zach reaches Mount Katahdin in Maine after five months on the trail.

What he did comprehend beforehand was that the trek would be both difficult and transformative. So transformative, in fact, that Zach wrote a book about the adventure. Appalachian Trials: The Psychological and Emotional Guide to Successfully Thru-Hiking the Appalachian Trail details his five-month journey and incorporates advice for how to do more than just physically prepare, but mentally prepare, which Zach said is key.

“Prepare yourself for the mental grind. It is by far and away the most difficult part of the trail,” he advised. “Know your purpose for hiking and set consequences for failing to follow through. The trail will throw a lot of punches a hiker’s way, and without knowing your purpose, it’s far easier to throw in the towel.”

But the advice present in the book goes beyond the trail. It’s “a guide for accomplishing any worthwhile challenge; backpacking is merely the metaphor,” Zach wrote on his personal website, The Good Badger. When asked if he had the idea for a book in mind prior to arriving home from his journey, he said the writing process began on the trail—he just didn’t know it at the time.

While on the AT, Zach kept a blog.

“A lot of the content from my blog was repurposed into the book because I had unknowingly been writing about the psychological pitfalls of the AT, the subject of Appalachian Trials,” he said. Five months after returning home, he self-published the book.

Now, the website that was intended to promote the book has taken on a larger purpose. When hiring someone to create the website, Zach asked him to include a blog within it. “He asked why. I said I didn’t know, but it just felt like the right thing to do—pretty much the story of my life to this point,” Zach said.

AppalachianTrials.com now serves as a platform for AT hikers to seek advice, share stories, and have an overall support group. Zach sought writers via Facebook at first, attracting two hikers. Both of them completed the AT, which is quite an achievement considering the 80 percent failure rate. Currently, there are about 20 bloggers who are either preparing to hike the AT, are mid-hike, or have completed it, all sharing their personal accounts.

“Only recently has the Appalachian Trials ‘blog’ transitioned into the main site, while the ‘book page’ has been buried in the back,” he said. “I’m more interested in promoting other hikers’ journeys, sharing Appalachian Trail advice, and spreading the thru-hiker way of life than I am in selling books.”

Upon returning home from his own AT hike, Zach said his emotions were mixed. At first, he was relieved to be part of civilization so he could tend to health problems that resulted from contracting West Nile virus halfway through the hike.

“My body was worn down,” he said. “I slept for 10 to 12 hours per day the first two weeks after returning home.”

After recovering, he said the negative effects of returning began to set in. He started to feel confined by living indoors and transitioning back to a sedentary lifestyle. He knew post-AT depression was common, and he definitely wasn’t an exception.

He would recall memories of the trip, such as when he and two other hikers he met along the way decided to try their hands at hitchhiking (read: backtracking) in order to avoid a strange hiker.

“After hiking 23 miles (seven miles longer than our previous best to that point) to get away from a hiker who was consistently giving off serial killer vibes, we (Whoop!, Road Dog, and myself) grabbed a hitch from a young guy who was driving the opposite direction to catch a flight for work the following morning,” Zach recalled. “Fitting into his hatchback required tying two kayaks to the roof of his car, squeezing his tennis rackets, fishing rods, and camping gear into the trunk, and [fitting] the three of us plus packs.”

The driver’s name was Jeff, and he drove the three hikers 12 miles to the nearest motel—in the opposite direction of where they were supposed to head. Before dropping them off, Jeff asked, “Hey, are you guys hungry?”

“An almost rhetorical question for long-distance backpackers,” Zach joked. “After waiting for us to check into our motel, Jeff would join us for dinner and beers. So many beers. A dangerous amount of beer. We stumble back to our hotel, and Jeff sheepishly asked if he could pass out on the floor of our motel. Considering he just saved our lives, we laugh, and happily forfeit one of our beds.”

A gift from trail angel Jeff.

Zach was the first to wake up the next morning. Jeff was no where to be found.

“I surmise that Jeff was merely a mirage until walking into the bathroom and seeing this [see photo on the left],” Zach said. “The ‘see you in VA’ was a reference of his invitation to stay at his home in Waynseboro, Virginia—500 miles down the Trail, which we did for three days.”

Zach refers to Jeff as one of the many “trail angels” he met along the way, all helping to make the journey one that was unforgettable.

What was it like getting back into a “normal” schedule after the weeks of unplanned events?

“Impossible?” he questioned. “It takes time to transition back into society’s norms, which is the polite way of saying ‘forgetting how wonderful life can and should be.’ After thru-hiking, it makes it incredibly difficult to settle for ‘the rat race,’ which is somewhat poetic considering it’s why I got onto the trail in the first place.”

But like many who come home from hiking the AT feeling a bit confused as what to do next, Zach took a full-time job again. In February 2012, he began working as the Director of Marketing for Tech Cocktail, but once again, discovered the corporate world was not for him, despite expressing his thanks at the wonderful opportunity given to him by the company.

“[It’s] a fun and rapidly growing tech company, but at the end of the day, it wasn’t what was in my heart,” he revealed. “Adventure is my passion and I’d rather fail trying to make a living my way than succeed doing what looked good on paper.

“[Now] the majority of my time has me working on AppalachianTrials.com with an increasing amount going toward a new (still secret) project (sorry),” he said. “I will be announcing this in the coming months on The Good Badger newsletter.”

But quitting his job was not just about the website—Zach is also planning to continue hiking. He said it allows him to get away from his own bad habits, namely an addiction to technology and work.

“Ironically, all of my best ideas have come from such retreats, but the real reward is the unconditional sense of peace nature grants me,” he said.

“If adventure is in your heart, I implore you to act accordingly,” Zach continued. “Whether it’s a thru-hike or just a week getaway, life is short and ignoring such impulses is a regret that follows us to our deathbed.”