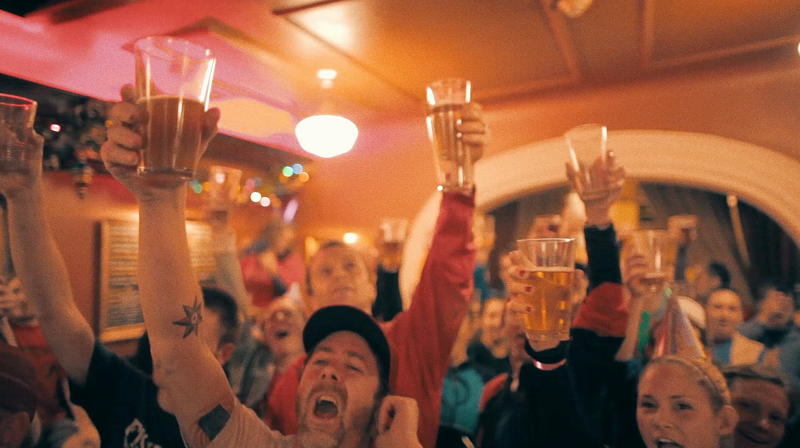 Fishtown Beer Runners celebrate with a cold one after a great run.

It’s an odd paradox, the idea of a running club full of beer enthusiasts. But David April, the founder of the Fishtown Beer Runners, said the two seemingly opposing activities can coincide quite harmoniously.

A few years ago, David decided he needed to make a positive change in his life. He laced up his running shoes and began running regularly with friends. It was during one such run that he first heard about research being done at the Medicine University of Granada by Professor Manuel J. Castillo. A study by Castillo suggested that drinking beer after a run could have restorative advantages.

“I thought it sounded like a great idea,” he said. “Not only does having a beer quench your thirst, but after working so hard, it was also celebratory and provided some extra motivation.”

Intrigued, David did more research on the study, learning all he could about the effects of beer consumption before and after exercise. Inspired by what he learned, David decided to apply the professor’s study literally, and so, in December 2007, he hosted the first ever Thursday-night Fishtown Beer Run.

Since then, the group has gained tremendous popularity with around 75 or more people showing up once a week to run a three- to five-mile stretch that ends at a local Philadelphia bar or restaurant. Though they only sponsor runs once a week, the group has created a community of runners who get together on their own to run three or four times a week. They motivate each other to improve and make it to the brews at the finish line.

“We try to create a sense of community and encouragement,” David said. “It’s important to understand that we are real runners that just enjoy a good beer. We aren’t slobs running through the streets with abandon, but we are trying to promote a healthy lifestyle based on responsible consumption and responsible running ethics.”

The runners gather in the streets of Philedelphia and listen to direction from David.

Though running and drinking groups have been around for a while (the Hash House Harriers, founded in the 1930s, is one of the most notable), Fishtown’s ethics and sense of camaraderie are what truly set the group apart from the rest. This may be why Chris McDougall, author of Born to Run, dubbed the group “America’s coolest running club,” and why the movement continues to gather steam.

“It’s a friendly environment,” David explained. “We encourage those of all abilities to join in, and the addition of the drinking afterwards helps to break down barriers and make the group and the idea of running less intimidating. To see a new runner have a beer with an ultra-marathoner is pretty great.”

Aside from drinking responsibly, the beer runners also practice something they call responsible running, which means giving back to the community. Bars will host fundraisers to match every beer they drink, or every mile they run, for charities like Achilles International and the American Cancer Society. David plans to continue to expand their nonprofit involvement. David is also very mindful when choosing locations to hold the after-run social hour at. Though the group currently has no formal affiliations with the Philadelphia bars, he tries to support the locals and pick places that will stimulate the local economy.

The movement has also caught fire in Spain, where the study originated.

“It’s funny,” David said. “I got the idea from the professor who was not a runner, but after I started the group, he started running because of it. Then the Spanish brewers launched their own beer-runners clubs to promote responsible drinking and exercise, and the whole thing has kind of come full circle.”

The success of beer running in Spain was particularly obvious to David when he visited Madrid last year to speak at the beer runner’s summit. There, he stood in front of 5,000-plus running enthusiasts and shared his message of personal healing and taking control of life, which is ultimately what the group tries to do.

“A lot of runners will tell you that getting out and pushing yourself is transformative,” David said. “It can just be such a positive thing in your life.”

Justin Wirtalla stumbled on the running group by chance. While visiting his cousin Chris over Thanksgiving, the two landed on the subject of Chris’ friend David and the running movement he had started.

Having previously completed a series of promotional videos and short films, Justin saw an opportunity to add something to his reel. But after just one night of filming, his original plan to create a 10-minute documentary quickly changed.

“There were so many great stories about people changing their lives because of this group, and doing a complete 180,” Justin said. “I was seeing the project on a bigger scope, and I began to understand everyone’s sense of purpose and goals to get healthy.”

Justin knew there was a lot to tell, and so he decided to tackle his first full-length documentary using the Fishtown Beer Runners as the subject. The true draw for the photographer-turned-director was to explain not only the movement, but the stories of individuals in the group. As such, the film will weave smaller stories of personal triumph into the overarching beer-running theme.

In order to complete his film, Justin asked for help from the online community to fund his trip to Spain this spring. There he will meet the professor, learn about the studies and the movement in Spain, and complete the story of this unique phenomenon. “I’m excited to create something that will hopefully inspire people in some way because I was truly inspired, and I want to share that,” he said.

Though the crew still has some kinks to work out, Justin hopes to have the film ready for release this summer. He will share it via his YouTube page, but is also currently looking at larger media outlets. To learn more about Justin and his works, or to follow the project’s progress, visit his website or Twitter.

“One of the great success stories of the group is about a Boston marathoner,” David said. “He came to the group because he was known as a bit of a loner. One night he came up to me and thanked me, saying that he needed this club; he needed it to meet people and be social, but he also needed to run. That’s what this is all about. It’s about combining two seemingly opposing activities to bring out the best in both, the social aspects of drinking and healthy aspects of running.”

Through the documentary and other efforts by David and his group, the Fishtown Beer Runners hope to inspire other chapters in cities around the world. Groups in places like Montreal, Gettysburg, and Boston have begun to sprout up and emulate the goals of the group. It is David’s hope the movement will continue and people will get interested in the Granada study, using it to promote healthy lifestyles.

Learn more about Fishtown Beer Runners and how you can get involved on their website. Check out the trailer for the Fishtown documentary below.