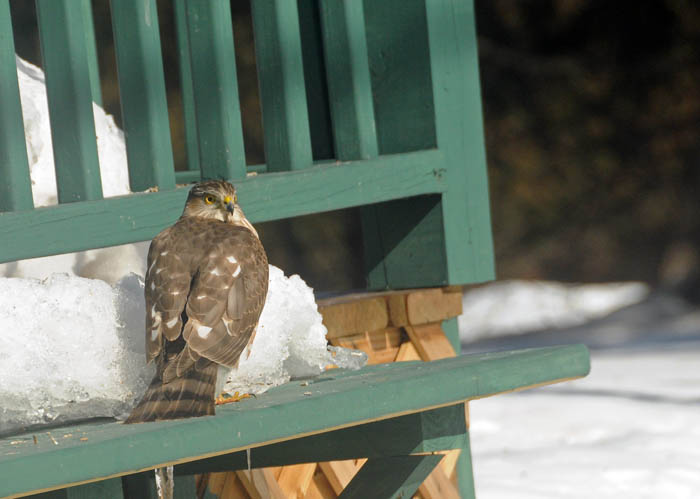 If you put out seeds to attract songbirds, don’t be surprised if you accidentally turn your backyard into a target-rich environment for Cooper’s hawks and sharp-shinned hawks.

Not everyone likes that idea, of course. After all, some folks coo like mourning doves themselves as these graceful, small-headed “birds of peace” casually peck sunflower seeds atop the snow alongside juncos and cardinals. Likewise, hearts flutter with joy and satisfaction as finches, chickadees, and sparrows flit between tube feeders and jockey for perches at bird buffets.

And then, boom! A sharp-shinned hawk flashes in low to the ground like a Tomahawk missile from between your house and garage, zips over the shrubs, and obliterates an unsuspecting junco, causing you to urp coffee down your chin.

At least that’s the scene I envisioned on a recent lunch break when spotting a small hawk atop the flower-pot shelf on my wife’s gazebo. I could see only its shoulders and head behind a snow mound, so I moved to the dining room for a better view. I secretly hoped I’d see it clutching an English sparrow in its talons, but no. Its feet were empty. Maybe its target escaped in that microsecond separating life from death.

Actually, I misidentified the bird as a Cooper’s hawk while photographing it. I started doubting myself when reading that females of the species are crow-sized. My hawk was about the size of an adult bluejay or mourning dove. Sharp-shinned hawks are roughly one-third smaller than Cooper’s hawks.

After studying more online pictures and descriptions of Coops and Shins— the “in” names for these hawks among accipiter-lovers—I still couldn’t identify my hawk.

Blush. There I go again, casually using words I looked up only seconds before. “Accipiter” is the name for a bird-of-prey group that, in the upper Midwest, includes the Northern goshawk, Cooper’s hawk, and sharp-shinned hawk.

Because I couldn’t positively ID the hawk that sat motionless for five minutes near our suddenly forsaken feeders, I sent its photos to Ryan Brady, a Department of Natural Resources bird expert in Ashland, Wisconsin.

“Definitely a young sharp-shin,” Brady wrote back, while assuring me it’s difficult to distinguish Coops from Shins. Both have short, rounded wings and long, rudder-like tails that make them extremely maneuverable in tight quarters. Further, females of both species are noticeably larger than males, which makes distinguishing a male Coop from a female Shin especially hard.

The sharp-shinned hawk, by the way, is named for the sharp-edged keel on its featherless lower legs.

The Shin in my yard was definitely a youngster, judging by its yellow eyes. As Coops and Shins age, their eyes change from yellow to orange to blood-red.

Brady also suggested I contact Professor Bob Rosenfield at the University of Wisconsin-Stevens Point. Rosenfield has studied Cooper’s hawks since 1980, distinguishing himself as a world-renown expert on them.

Both men deal often with folks who dislike small hawks staking out birdfeeders for their meals. But wishing them gone is futile.

Rosenfield agreed. “That’s how the planet operates,” he said. “I try to explain to people that a top-level bird of prey benefits songbirds. It increases their diversity and defenses by keeping them looking over their shoulders. That pressure helps songbird species select for speed, agility, and other traits that reduce predation risks. If they hadn’t evolved with that selective pressure from Cooper’s hawks and sharp-shinned hawks, they wouldn’t be the songbirds we now admire.”

Cooper’s hawks tend to target birds the size of robins, cardinals, starlings, sparrows, and mourning doves. They also favor the Eastern chipmunk, but female Coops—because they’re bigger than males—can kill pigeons and even gray squirrels. Because Shins are smaller, they usually target songbirds like juncos, finches, sparrows, and chickadees.

Whether you curse or admire Coops and Shins, you should probably credit Rachel Carson’s Silent Spring and lawmakers who banned the insecticide DDT nationwide in 1972. Like other raptors whose populations plunged from the 1940s through the 1960s from widespread DDT spraying in agriculture, accipiters once teetered on extinction.

And because Shins and Coops are noted forest dwellers, their futures looked especially bleak as our post-World War II building boom fragmented forests and large woodlots. But as these hawks rebounded in the 1980s and 1990s, Coops surprised everyone by going urban. In fact, Milwaukee is now home to Wisconsin’s greatest nesting densities of Cooper’s hawks, and delivers their best reproductive success rates, Rosenfield said.

Further, the two birds that urbanized Coops prey on most heavily are English starlings and sparrows. “Who could have predicted that a native species headed for extinction would end up thriving in North America’s most unrewarding habitats, and preying on two invasive species as their primary resource for food?” Rosenfield asks. “Things change, and we’re now seeing a completely new suite of characteristics we never saw before in these birds.”

For instance, most birds are monogamous when nesting, including Cooper’s hawks in wooded habitats. But Rosenfield has documented polygamy among urban male Coops, with some breeding two mates, and feeding fledglings and defending nest sites of both females.

Shins, however, remain more of a secretive bird that nests in boreal forests of the northern Great Lakes, Northeastern states, and southern Canada. Although they’re found throughout Wisconsin, they’re seen most often when migrating along the southern shoreline of Lake Superior and Lake Michigan’s shorelines in spring and fall. Some stay within a few hundred miles of Canada all winter, others continue farther south.

Either way, they’re forever following their prey base: smaller birds. And if their prey leads them to your feeder, sigh and accept it. Consider it a small ransom that prey must pay to ensure their species’ long-term health.