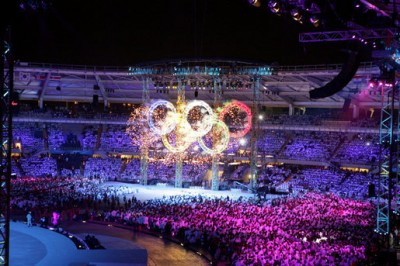 This year's Olympics will add 12 sports to the roster.

This year’s Winter Olympic Games is set to be one for the record books thanks to the debut of not one, not two, but 12 new events. This means the 2014 Winter Olympics will feature a record 15 disciplines across seven sports, and boast a whopping 98 medal events. The Olympics is also set to run an extra day in order to fit these additions into the schedule.

Eight of the new events were chosen because of their crowd appeal, demonstrated by the popularity of the sports in the X Games. This is also a breakout year for women’s sports, with the addition of five female-only events as well as three mixed-gender events.

Here is a quick breakdown of new games to look forward to at the 2014 Olympics:

After years of watching snowboarders take on the challenge, skiers will finally have a chance to tackle the half-pipe. Just like its snowboarding counterpart, skiers will attempt a series of complicated jumps, twists, and turns in hopes of impressing judges over a two-run series. Then, based on a score of take-off, height, trick difficulty, and landing, the judges will narrow the field to just 12 skiers who will compete in a two-run qualifier for medals.

Unlike the well-known slalom skiing, slopestyle requires downhill racers to tackle diverse terrain and perform a series of tricks. The course is built accordingly, with a number of bumps, big jumps, rails, and boxes available for racers to utilize. Skiers are scored on trick sequence and difficulty of the routine as well as number of mistakes. The 12 best skiers from both the men’s and women’s divisions advance to the medal round.

Snowboard slopestyle mimics slopestyle skiing, with the main difference being the types of tricks. But overall, the competitors will tackle the same course and be scored based on the same criteria as the skiers.

Those who love a good race will gravitate toward the snowboarding slalom. This classic race down the hill is simply scored by seeing who of the two snowboarders competing makes it to the bottom first.

One of the Cinderella stories of this year’s Olympic Games is the inclusion of the women’s ski jump. The athletes in this event pushed harder than any other for the inclusion of their sport and, thanks to their efforts, are finally getting a chance. The ladies will be allowed two jumps a piece in the qualifying and final rounds. Medals will be awarded based on the combined score of all four jumps. The event will take place on the same hill as the normal men’s ski jump—the large hill and team event will remain all male for now.

A more foreign concept to Americans, this race is wildly popular among European countries. Teams are mixed gender, requiring the skills of two male and two female skiers. Each athlete is required to perform two kegs, 6 km for women and 7.5 km for men, and shoot twice, once standing and once on the ground. Missed shots result in a 150 km penalty lap. The next person will start when their teammate touches their hand. The team with the lowest combined time will be named the champion.

The luge relay will combine the three current event teams into one, so men’s, women’s, and doubles will all be represented in this overarching race. Sleds will slide one after another, requiring the previous sled to activate a touchpad at the finish line that opens the gate for the next slide. Teams will be scored on the fastest combined time, recorded by the last sled hitting the touchpad.