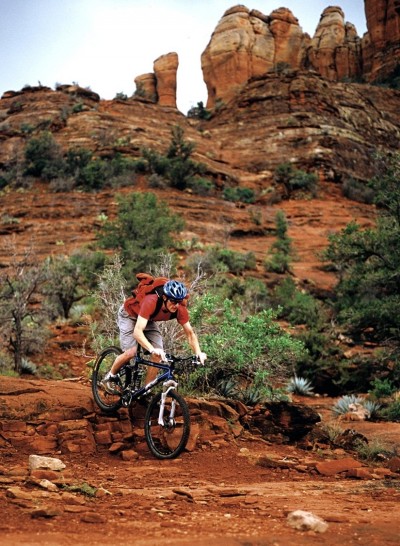 A mountain biker rides through the desert in Arizona.

Whether it’s steep ascents, curving wooded trails, or desert scenery that grabs your attention, the country has plenty to offer as far as mountain biking goes. And no, cities surrounded by enormous mountain ranges are not the only ones to make the list. Check out our list of 10 of the best mountain biking cities below.

Bend, Oregon
With more than 200 miles of trails to explore, this area that runs along the Deschutes River near the Cascade Mountains provides perfect scenery to take in along the ride. The endless number of trails may seem overwhelming to some, but it’s paradise for mountain bikers—as long as they have enough time to adventure on all of them.

East Burke, Vermont
Kingdom Trails is what sets this area apart from mountain biking locations in the rest of the country. The 100-mile trail system passes through pastures and forests, giving riders a variety of environments to experience. An additional bonus to East Burke’s interconnected trail system is the downhill biking available via lift access.

Fruita, Colorado
The desert riding is what attracts mountain bikers to this location, which includes the Colorado National Monument. Reaching the monument requires following Climb Rim Rock Drive, featuring a 2,750-foot rise in pavement. But the view of the red rock canyons and vast valleys make the climb worth the effort, not to mention the joy of coasting downhill after.

Harrisonburg, Virginia
It’s the growth of interconnected bike trails that’s putting Harrisonburg on the map. Several groups have teamed up in trail creation, namely the League of American Bicyclists, IMBA, and the Shenandoah Valley Bicycle Coalition. Epics are also present here, including The Southern Traverse.

Madison, Wisconsin
Known as the city that has the highest number of bike usage in the country, Madison is an obvious pick for this list. The home of Trek is characterized by The Quarry, which is the only sanctioned off-road bike system within the Madison city limits. While The Quarry is geared toward experienced riders, there’s a fair amount of city riding and it only increased after local shops donated bikes for public use.

Marquette, Michigan
While the terrain of Michigan is not known for incorporating technical mountain biking trails, Marquette has become a mini haven for mountain bikers, located in the northern region of the state. The environment is categorized as rugged, winding through old forests. From beginner trails to areas that have technical stunts, it’s a great location for people of all skill sets.

Missoula, Montana
Mountain biking in Missoula is aided by the organized and useful website that details everything about mountain biking in the area. There are trail systems located a few minutes from downtown at the Rattlesnake Recreation Area, Pattee Canyon, and Blue Mountain. If singletracks are your thing, there are plenty of trails in these pine forests.

Park City, Utah
Regarded as a Gold Level Ride Center by IMBA, Park City proves itself as one of the best mountain biking cities in the country. In addition to the bike lanes that weave through the city, as well as cross-country trails and downhill runs, Park City has it all. There are also plenty of places to freeride and the opportunities at places like Deer Valley Resort are endless.

Santa Fe, New Mexico
If variety is what is being sought, Santa Fe should be first on the list. With the city itself being more than 400 years old, the scenery while riding though town may seem like enough within itself. But then there are the more than 50 miles of trails that feature twisting paths, technical rides, and pure downhill joy.

Tuscon, Arizona
Learning that Tuscon is surrounded by five different mountain ranges should be enough to convince any serious mountain biker that visiting this place is a must. Even more enticing is knowing that within the ranges hides more than 300 miles of perfect singletrack.

Image from Tom Johnson on the Wikimedia Commons