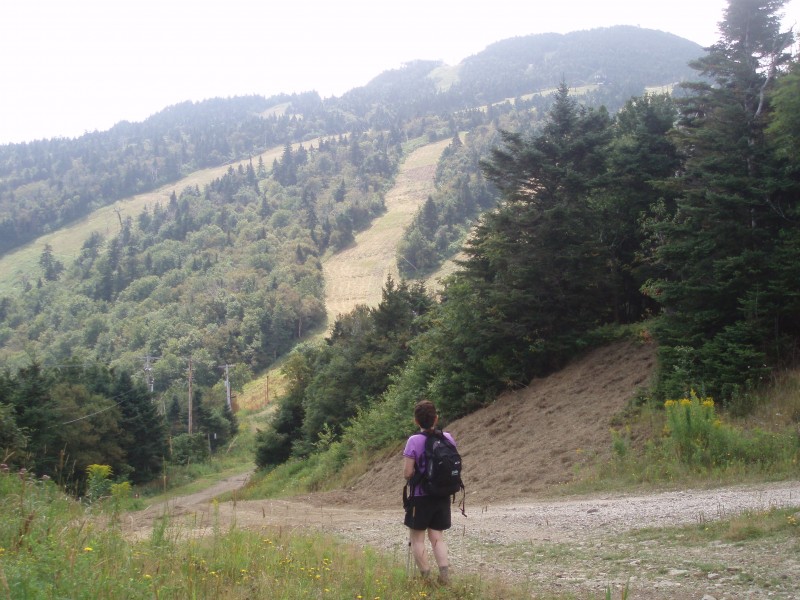 Taking a break on the way down from Vermont's Killington Peak.

We traipsed across the beastly mountain, darting through the glades, up the wide slopes, and out across its vast expanses with extensive views of central Vermont.

We weren’t on skis or snowboards, but poles were in hand as we stopped frequently to admire the colorful wildflowers and lush weeds on the grassy slopes. Though we didn’t encounter any bog bridges or log crossings, there was the occasional stretch of snowmaking pipe to walk over as we hiked among the beech, clubmoss, maples, birch, balsam fir, and red spruce.

This is Killington before the snow flies.

Better known for its ski resort, Killington Peak is also the highest of the area’s six mountains. Hikers often climb to the bare summit with expansive views from the west along the Bucklin Trail, or use the venerable Long Trail (Appalachian Trail). But the Big K also has its own neat 15-mile network of hiking trails and we found a moderate 4.5-mile moderate hike to try, which at times crossed familiar ski trails.

Purists may scoff at ski area hiking, preferring the solitude and familiar narrow pathways found across the mountains. But Killington’s trails provided bursts of scenery and a pleasant diversion from the norm, with its many identifying signs on trees and odd-shaped rocks. No blazes, but plenty of arrows, wooden stairs, and of course, the sneaker-and-sandal gang taking the gondola to the top where work crews were busy building the second coming of the $7 million Killington Peak Lodge set for a December opening.

That’s what made the hike different. My hiking honey and I were able to recall some of last winter’s epic runs as we crossed ski trails like Bittersweet, Low Road, and High Road, trekking up Great Northern and Rime heading down. Heck, we were on Superstar, the last ski run standing in New England, which officially closed May 26.

Then there was the lodge up top. The first lodge, constructed in 1968 and torn down in 2011, was built at a time when materials were carried up by bucket. The new one calls for 15,000 square feet of space constructed at the mountain’s 4,100-foot level. And because it’s Killington, the lodge is part of the resort’s “cow power” program, which converts manure into electricity.

The summit is still a bit like a carnival with its myriad of communication towers, a shuttered fire tower, and copious but welcome stairs. A short circular summit walk (J on the map) led us to the bare rock top.

Had the fog not been so stingy up top, we would have seen eminent Green Mountain peaks on display from Mansfield to Glastenbury. Mount Ascutney stands in the southeast with the Taconics, Lake Champlain and the Adirondacks in the west. The village of Plymouth is east. To the northeast are the White Mountains.

Instead, we returned to those stairs and visited a place not on the Killington map, but easily accessible a few minutes’ walk away through an easily-found trail: Cooper Lodge on both the Long and Appalachian Trails. The Vermont Forest Service built the rustic stone and wood cabin in 1939. On state land, the cabin is maintained by the Green Mountain Club, and held a trio of LT hikers.

Though the way up was largely a hikers-only world, the way down was a shared maintenance road. We only saw a group of downhill mountain bikers, one pick-up truck, one ATV, and one ascending hiker as we frequently stopped to take in the views. We left the fog behind knowing full well that after the leaves turn and begin to fall, the snow guns will blast us into that wonderful world of white.