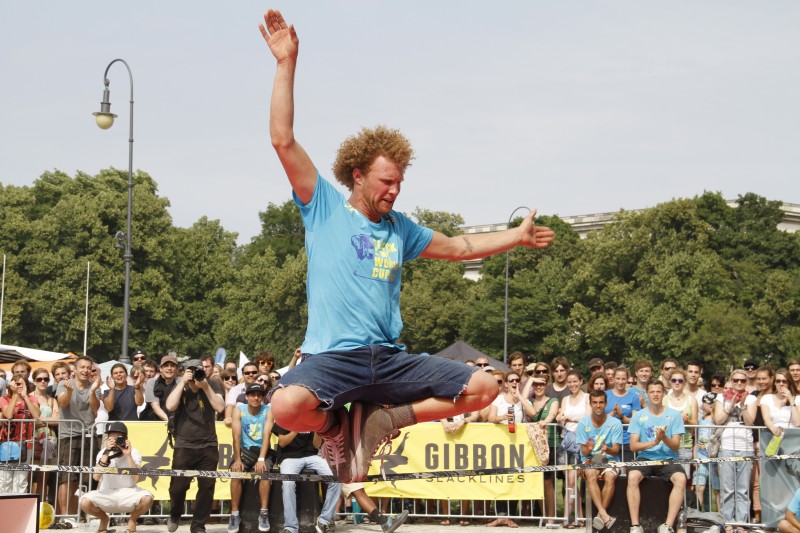 Andy Lewis is regarded as one of the most talented competitive slackliners in the world.

Although slacklining is similar to tightrope walking, it was actually developed by two rock climbers back in 1979. The pair, Adam Grosowsky and Jeff Ellington, were attending Washington’s The Evergreen State College when they began walking across loose chains and cables as a way to spend their free time. They soon came up with the idea of stringing up one-inch wide, flat climbing webbing, relying on the flexibility of the nylon webbing to perform tricks. Red Square was at the center of campus and soon became the training ground for Grosowsky and Ellington during their breaks between classes. It was at this location that they drew in crowds of curious students.

A fellow student and climber, Brooke Sandahl, was involved in the creation of the sport from the beginning as well. The two young men were very intrigued by circus culture and the history of wire-walking, which influenced them in 1981 to walk without a safety leash across a 30-foot high-line that was strung 25 feet above the ground. After the daredevil tricks carried out by the group received attention, the rock climbing community on the West Coast began to catch on, helping to spread the sport to new locations.

The founders of the sport discovered that the higher the line was rigged, the more rewarding the experience was. Several years later in 1983, they set up a 55-foot cable line at Yosemite’s Lost Arrow Spire, which rose 2,980 feet high. Neither one of them were able to cross the line, but the following year Scott Balcom and Darrin Carter took a high-line to the same place, but rather than using a cable, they used webbing. Both of them were able to cross the Lost Arrow Spire, with Libby Sauter recognized as the first woman to cross the line in 2007.

“Climbers would stay there for weeks blazing new routes and in their time on the ground they starting rigging climbing rope to walk across,” Gibbon Slacklines stated on its website. “They found that the activity improved their core strength, balance and movement for climbing – and is was fun.”

Since gaining popularity with the climbing world, slacklining has now developed into its own sport and is used commonly as a backyard activity as well as a cross-training mechanism for athletes looking to add variety to their routines. While many people take the sport to extreme heights, it’s one that is versatile and can be learned within a few hours. This practice of balance utilizes either nylon or polyester webbing that is strung between two anchor points such as trees. It uses tension, but is not as taut as a tightrope would be. The material more so resembles a trampoline, so it’s very flexible and moves with the body.

While slacklining can take on many different forms depending on the intention and skill level of the athlete, it’s very easy to learn. The first step is to gather the correct equipment. The actual webbing is available in several different options, with some that come in two separate sections and others that come in three. For assistance with making sure you’re purchasing the correct line, check out this advice from Gibbon Slacklines and watch this instructional video about how to set up your equipment. Use the hardware that is purchased with the line to secure it to two trees, and make sure it is relatively close to the ground to provide a good learning environment. Slackline equipment is available at a variety of retailers, but check out the kits from REI and Gibbon to start with. A safety leash is typically only used on high-lines. A big feature of the sport that is recognized as imperative is the protection of trees that are used as anchors, ensuring they are not damaged along the way.

This is a sport of balance, so try to put the frustration aside if you’re having trouble getting the hang of it in the beginning trials. Try to learn from the direction of an experienced slackliner who can give you tips along the way. Using cross-training tools such as yoga poses that require balance are great ways to establish this skill that transitions well into slacklining. Another recommendation is to slackline above deep water, which limits the amount of injuries that can be obtained and at the same time provides a new, exciting environment.

Tricklining grew from slacklining, focusing on the stunts people were able to do while walking across the webbing. This is more of a competitive sport, housed under the World Slackline Federation, which judges tricks according to five criteria; difficulty, technique, diversity, amplitude, and performance. Andy Lewis is one of the most well-known competitive slackliners and he spread word of the sport even more during Madonna’s Super Bowl XLVI Halftime Show in 2012.

“People think it’s an adrenaline sport. It’s not. It’s all about the breathing and being in the moment,” said one of the slackliners featured in the video below, which shows extreme high-lining and was published by The Good Line last fall. “It’s really just your ability to stand up and put one foot in front of the other, kind of like how you should do everything else in life.”

Image from Henning Schlotmann on the Wikimedia Commons