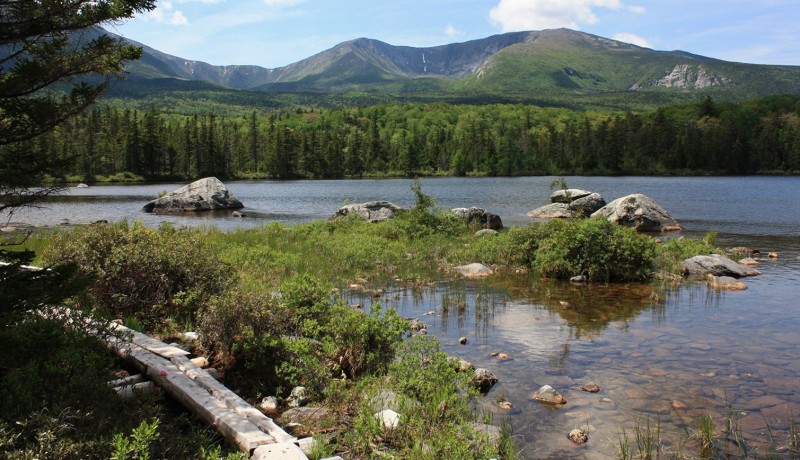 The hike to Sandy Stream Pond in Maine's Baxter State Park is one of the many gentle jaunts found in the massive park.

The pond is a crown jewel in the far reaches of Maine’s Baxter State Park. Not only do hikers venture to its pristine shores under towering 5,268-foot Mount Katahdin and South Turner Mountain, but so do moose.

Earlier this summer, Sandy Stream Pond didn’t disappoint, and neither did the moose—nor the mergansers. For there beyond Big Rock on the water’s edge was a late-morning moose wallowing in the stillness. Whether in the water or the brush for a spell, the moose didn’t seem to mind being watched from afar.

Berries and boardwalks also are spotted during the gentle hike to the pond, one of several easy options within the park known for containing the highest peak in the Pine Tree State.

The behemoth—Maine’s highest mountain—called Katahdin is the main draw in the 200,000-plus acre preserve containing its mountains, ponds, trails, eskers, and more. The massif is the northern terminus of the Appalachian Trail, a place where hikers begin and end their million step journey.

Wildlife abounds, and more than moose. There is the chatter of red squirrels gathering cones, increasing their pace as the cold season approaches. They may not be seen as much, but beaver certainly live in Baxter, their gnawed stumps dropped about here and there by and in the water, often causing flooding for hikers on certain trails.

The cries of loons warble through the park, while many visitors don’t have to leave their vehicles to spot a whitetail deer often founding frequenting the park roads. Black bears are there too, searching for berries in August before venturing to higher rides for beech as the leaves turn.

Credit goes to former Maine governor Percival P. Baxter for creating the park giving people a shot at seeing moose, waterfalls, and rushing streams. A childhood angler who vacationed int the Maine woods, Baxter began purchasing land around his beloved land containing the state’s highest peak. He donated his first parcel to the state in 1931 and upon his death amassed more than 200,000 acres, which now constitute the park bearing his name.

Though there are many other mountains aside from Katahdin to climb like South Brother, The Traveler, Trout Brook, and more, there are times for a pleasant family-style ramble and Baxter has a multitude of those too among its more than 200 miles of trails.

The trek to Sandy Stream Pond is one of those outings. Located some eight miles along the dirt Roaring Brook Road from the Togue Pond Gate entrance some 16 miles from Millinocket, the hike to the pond is a mere leg-stretcher, about a half-mile each way along the Sandy Stream Pond Trail from the Roaring Brook Campground—one of 10 in the park—with its bridge and log walkways. Though seeing a moose isn’t guaranteed, there certainly is a good chance.

There’s also a good chance of bumping into other people at Little Abol Falls. The small horsetail-shaped falls may only be about a 15-foot drop into a splendid pool, but the cascades are a readily approachable destination that doesn’t take much effort. Located on the Little Abol Falls Trail by the Abol Campground nearly six miles from the Togue Pond Gate entrance along the Park Tote Road, the 1.6-mile roundtrip hike can easily be done in under an hour.

There’s a stream crossing at the onset, but then the trail is gradual for the way up and downhill on the return.

Daicey Pond is another wild waterway that’s not too taxing as a destination for hikers, and like Sandy Stream Pond, serves up some Katahdin—plus Barren, OJ1, Owl, and Doubletop—views. It’s reached by taking the Park Tote Road from Togue Pond Gate about eight miles and turning onto the marked road to the pond. The pond itself is stunning with canoes available for paddling and fly fishermen testing their skills. The campground there, with cabins, was once a sporting camp dating back to 1902 and was absorbed into the park campground system in 1969.

The 1.8-mile loop Daicey Pond Nature Trail encircles the pond on relatively flat terrain also using the storied AT for a stretch. Through the spruce, pine, fir, and birch, the pathway works its way down to water’s edge, making way to some fine vistas of the western side of Katahdin, of course the peak taking center stage.