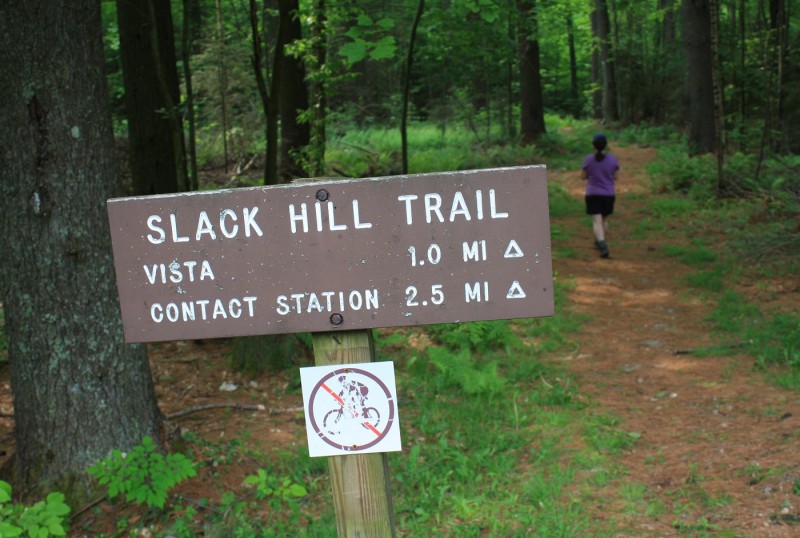 The perfect trail for slackers.

Are you a slacker?

The area is a splendid swath of rural Vermont nestled along winding Route 100A north of Ludlow and Okemo. Nearby mountains like Killington Peak, Mendon, Smith, and Little Killington comprise the Coolidge Range and offer some 30 miles of hiking.

At its southern end is the President Calvin Coolidge State Historic Site, birthplace of the 30th president and home to a collection of historic buildings. The fly-fishing president was also sworn in there by his father upon the sudden death of Warren Harding.

Also in the notch, Coolidge State Forest was first established in 1925 and is a fairly large tract of land, some 21,000 acres spread around seven towns. The state park with its beech, fir, spruce, hemlock, and maples is off Route 100A and contains a number of tent camping sites as well as a wealth of lean-tos, many with incredible views of the Green Mountains and Black River Valley. The park is the only one in the state with a loop of lean-tos and is the largest state-owned land holding in central Vermont.

The Slack Hill Trail winds through sections of ferns. It’s located in the Coolidge State Forest in Plymouth, Vermont.

Coolidge State Park is also the gateway to the obsolete town of Plymouth Five Corners that once held a hotel, store, and blacksmith shop. Trekkers following brooks and streams may spot old foundations along water’s edge and some old cellar holes in the woods. Fortune seekers may pan for gold in the waters, and there’s even been talk of an uptick in gold flakes found following the imprint of Hurricane Irene in the area. But be forewarned, only traditional hand panning can be used. Forget about mechanical means, digging, dredging, and using sluice boxes. And if you come across a historical artifact, leave it be. It belongs to the state of Vermont.

Those not staying in the park pay a day use fee to hike Slack Hill and the 3.6-mile circuit. The ranger suggested a counter clockwise loop leaving from the trailhead along the bumpy paved park road across from the picnic pavilion with it mountain vistas about 1.5 miles from the park entrance.

The blue-blazed loop’s not tough at all for seasoned hikers and features plenty of easy footing through patches of ferns and white pines. We also spotted several pink lady slippers near the beginning of the trail before we stumbled across a ruffed grouse having trouble taking flight. The bird made something of a distress call and another then flew in, getting in the way between its friend and the two of us on the trail. The brave bird stood tall and made its way closer to us as if to advise us not to tread on his turf. Impressed, and not wanting to get into a tangle, we moved on.

In that short mile, we reached a viewpoint over to Mount Ascutney–a peak with an auto road, tower, and even a platform for hang gliders to launch–with its log bench before moving on again. The trail runs shy of the hill’s summit and does slightly increase in difficulty for a spell, but follows a friendly rascally ridge that’s easy on the soles.

The footpath winds down to the paved road, the final leg back up to the trailhead, readily reached by those who slack and those who don’t.