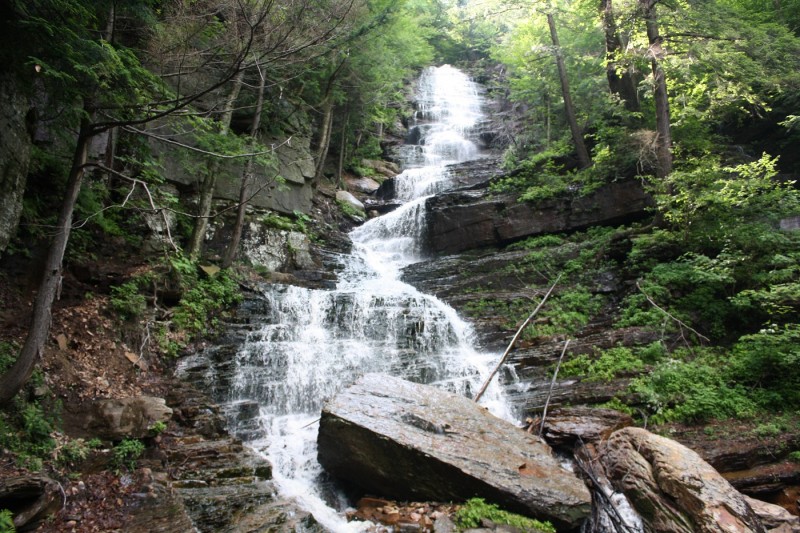 Lye Brook Falls outside Manchester, Vermont is one of the highest waterfalls in the Green Mountain State.

On a sweltering tropical-like day, the towering falls spelled a bit of relief from the heat and humidity of southern Vermont.

Though a rainy summer dampens many planned outdoor adventures, the forecast isolated showers never found us. But all the rain means not only are water levels high and rivers running amok, so are the waterfalls.

What would normally be a July trickle was a wonderful torrent, the thick horsetail of water plunging some 125 feet or so down the seemingly terraced rocky wall in the Green Mountain National Forest.

Lovely Lye Brooks Falls is one of the tallest waterfalls in Vermont. Fed by Lye Brook, it was once called the Trestle Cascade as a testament to a trestle that spanned near the falls during a time when logging and railroads ruled stylish Manchester.

The fashionable and lively village attracts the outdoor world with its hiking, fly fishing, and proximity to ski areas–and it’s minutes from the nearly 18,000-acre Lye Brook Wilderness.

That’s what makes the moderate trek to the falls so remarkable, that true wilderness is so close to town. The trailhead is just a couple of miles from downtown and its free WiFi opportunities and strolling streets for shopping.

The Green Mountain National Forest says the 4.6-mile out-and-back adventure along the blue-blazed Lye Brook and Lye Brook Falls Trail uses old logging railroad grades and woods roads. The way is generally steady, but there are some pitches where you’ll need to expend a bit more energy to chug up the path. Also, be cognizant of the plentiful stream crossings.

And know that a small section of the trail traverses an impressive landslide created by the finicky and powerful fingers of Hurricane Irene passing through in 2011.

Hiking through the landslide of the Lye Brooks Falls Trail.

The hike begins easily enough from the circular parking area on level ground through the hardwoods, with signs telling visitors of only foot travel. The trail parallels the brook en route to the falls, they it’s not always possible to see it. Maybe 100 yards into the journey there’s an unmarked trail junction that invites expiration of the waters, giving a bit of closer look.

Soon enough there’s a trail registry and at about .4 miles in, the wilderness boundary is reached. The trail is forgiving, showing up smooth and rocky stretches with some interesting rock formations along the way. There are also those multiple stream crossings, the first one not terribly far after entering the wilderness.

In about a mile, the trail shows a bit more bit, heading up into an area known as Lye Brook Hollow with some steepish drop-offs down to the waters. Pass through a hemlock stand and then more intermittent patches of smooth and stones. Along the way are small clutters of rocks that tumbled down the hillside, foreshadowing what is to come.

The trail narrows and begins a slight descent through a wet rocky area before coming upon the slide. The slide is startling–as if an entire piece of the woods was just knocked out. Trees, rocks, and more fell some 500 feet or so down the hill. The trail easily navigates the slide for some 20 yards across, and then it’s back into the woods.

The falls are soon reached at about 2.2 miles into the hike, with its web of trails heading down to a large sunning rock or up along a goat path. Turning left affords fall lovers a fine perch to marvel at the spectacle, so cool during the heat of a hazy, tropical summer.

We wallowed in the crispness of the welcome, cool air before making the return trip in the late morning, soon coming upon bands of hikers.

At the last brook crossing, we met two visiting couples out for a hike. Clearly crossing the stream made them uneasy. They were concerned about slipping. I could go on about how they were ill-prepared, but after offering to help them across we also realized they would need help when they came back.

So instead, we suggested other routes in the area, continued on and relished that we got back to the truck and were inside when those rains eventually came.