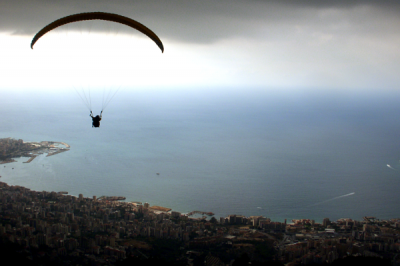 Paragliding near Beirut, Lebanon. This are recreational and competitive pursuits for this extreme sport and an advanced skill set is necessary.

Paragliding is an extreme sport where glider-equipped participants are responsible for launching and landing themselves, in most cases without the assistance of an engine. Paragliders are often up in the air for several hours, so understanding how to control the equipment is essential. This is not a sport for newbies, but definitely something that can be experienced by anyone with the assistance of an expert.

The glider crafts that are most frequently used have no main structure and are comprised of a harness, a fabric wing, brakes, and speed bar, among other pieces of equipment. The user is held in the harness and attached to the wing above through a series of suspension lines. Altitude and momentum are both gained through several air vents in the wing, as well as by the skill level of the pilot who is steering and the weather in general. Most of the wings are made of high-performance, non-porous materials like rip-stop polyester or a nylon fabric. They are typically 25-40 feet long and weigh between seven and 15 pounds. Planning the starting and ending points of a trip is often the most challenging part of paragliding, as changes in wind direction and speed can have a huge impact on the landing location.

The sport, a close cousin of hang gliding, originated in 1952 when Domina Jalbert advanced the technology of gliding parachutes with more cells along with controls for lateral glide. Two years later, Walter Neumark made the prediction that gliders would be able to launch themselves from cliffs or by running down a hill, leading to gliding that could last for hours. More advancements were made in 1961 when French engineer Pierre Lemoigne created innovative parachute designs–which later became the Para-Commander–including cutouts in a parachute that allowed it to be towed and steered, leading to the recreational sport of parasailing. While Jalbert was inventing the airfoil, David Barish was developing a sail wing that assisted in the recovery of NASA space capsules. He later marketed this same technology in what he called “slope soaring,” which failed to gain much attention, but included the self-launch technique now used in paragliding.

Neumark wrote the book Operating Procedures for Ascending Parachutes, later leaving the British Parachute Association to create the British Association of Parascending Clubs in 1973. The Paragliding Manual, written by Patrick Gilligan from Canada and Bertrand Dubuis from Switzerland, was when the term “paragliding” was first coined. In 1978, the first successful and official paragliding session took place. Since then, equipment has been improved upon greatly, with thousands of pilots registered. There is even a Paragliding World Championship held in Switzerland, which first began in 1987.

Additional equipment that has been added over the years for safety purposes are variometers, radios, and often some sort of GPS device. In addition to proper planning of where one should land, understanding the most effective way to launch and land is imperative. In lower winds, a forward launch is used, in which the pilot will run forward with the wing behind them. A reverse launch is necessary in higher winds, where the pilot will face the wind to bring the glider into a flying position before turning around under the wing to finish the launch by running. A towed launch is also possible and can involve a release cord that will give them initial momentum to get the flight started. The first step in landing involves aligning the glider directly into the wind right before touching down. If the winds are lighter, some running may be required. Typically, the resistance of going against the wind is enough to stop the glider in a relatively short amount of time.

The speed bar, also known as the accelerator, is operated by the pilot’s foot and increases speed by decreasing the wing’s angle of attack. The brakes are held in the pilot’s hands, giving the highest degree of control and steering ability. In addition to steering with the brakes, the pilot must learn how to properly adjust their body position so as to assist with the steering procedures. Leaning movements are often the most important in determining direction.

Paragliding done by an advanced user can provide a beautiful view of the land or water below, with the ability to reach thousands of feet. Those interested in learning more should contact the nearest place to register, although requirements do vary throughout the world. The certification process takes about 10 days.

Image from Arnaud DG on the Wikimedia Commons