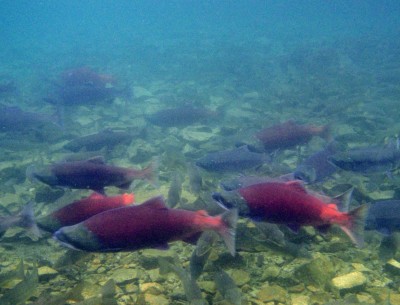 Keep an eye on the sockeye.

The U.S. Forest Service placed a salmon cam in a creek within the nation’s largest national forest as the feisty adult fish swim back to their spawning grounds.

The camera is in about 18 inches of water in Steep Creek by the Mendenhall Glacier in southeast Alaska’s Tongass National Forest in Juneau.

According to the Service, sockeye arrived at the location around mid-July. The camera allows online viewers to see the fish in their natural surroundings as salmon create nests called redds, find a mate, spawn, and then die.

“The overall escapement, or numbers of fish that reach the spawning grounds, for Steep Creek sockeye varies from year to year,” said Pete Schneider, a Tongass fisheries biologist, in a release. “An average run would be considered 1,000 fish. We have seen it as low as 350 and as high as 4,000. So many factors can contribute to run size. It’s difficult to predict.”

In spring, sockeye fry come out from the gravels and move into Mendenhall Lake and Mendenhall River muddy channels and pond to feed between one and three years before swimming to the ocean. They spend several years in the ocean before returning as adults to Steep Creek for their final acts.

Viewers might see female salmon digging her reed. She wiggles back and forth to make a depression before depositing her eggs. Then the male moves in to spread his sperm (called milt) over the eggs. The female then covers the red and will move away to do it again.

Watch the live stream below:

The camera is typically in place until the end of September, but the sockeye run slows down by the end of August. Then around mid-September, it’s time for the coho salmon to swim by.

Schneider said the coho run will not be as large as the sockeye. However, more Dolly Varden char enter the stream, too. Many Dollies arrive “early” to feed on loose eggs during sockeye spawning, but many more arrive in early fall to spawn. They spawn about the same time as the coho in different locations along the creek so they do not overlap with the coho, a process refined over years of evolution.

Viewers may also see other creatures, like bears. They feed on salmon as part of their high calories diets to prepare for hibernation.

“Bears will often target the female salmon for their eggs. Their keen sense of smell can detect the eggs, and I have seen them actually release a male and return to fishing for females,” Schneider said. “When salmon are plentiful, it is normal to see a carcass along the bank with only the belly eaten. The brains are also a high-calorie hotspot, even though they are smaller than a walnut.”

Schneider says none of the salmon go to waste.

“There is a plethora of mammals, birds, insects, fungi, and plants waiting to make full use of the remaining nutrients,” he said.