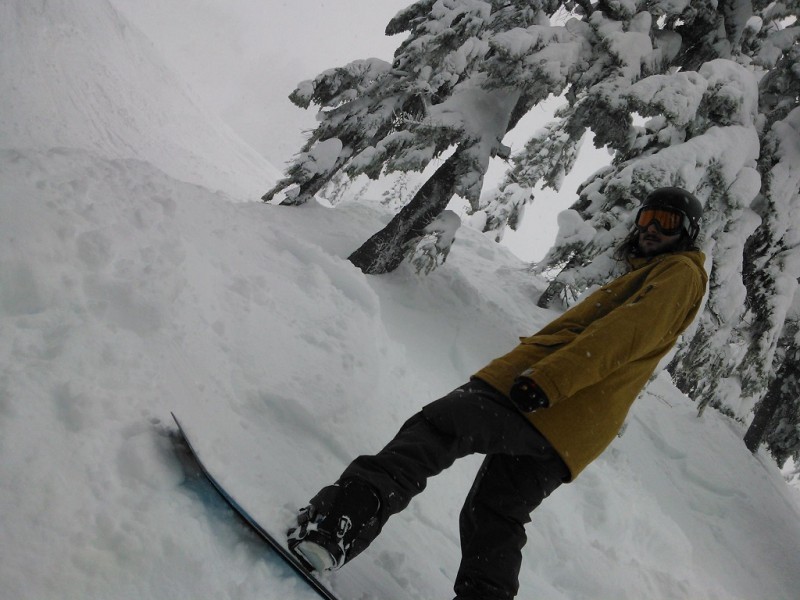 Stew Langner made the move to Washington not only to start a new job at evo, but to spend as much time snowboarding as possible.

During a road trip from California back to his home state of Michigan, avid snowboarder Stew Langner decided that Seattle, Washington was the place he could both build his career and snowboard often.

“We drove last summer from Tahoe to Michigan and it took us a month,” he said, looking back on the trip with his girlfriend. “We were kind of scoping out different areas. Portland was extremely weird to me, but Seattle had a great market and it was a nice downtown city with the mountains close by.”

Langner said his love for snowboarding, which he refers to as more of a hobby for him than a sport, is appealing because people can have a variety of skill levels.

“You can go explore the mountains, do a flip, or just cruise,” he said. “Everyone has a different style, but as long as you’re having fun, that’s all that matters.”

After school, Langner made a move to California, drawn to the location mainly by the snowboarding opportunities that were present there. He began work at Squaw Valley, a ski resort that sits on the north shore of Lake Tahoe. After this initial transition from Michigan to the West Coast, Langner chose to pick up again and make a home in Seattle.

Now working as a copywriter and sales associate for evo, a company based out of Seattle that sells outdoor equipment and clothing, Langner is able to work in a field he is truly passionate about.

According to evo’s website, “At evo, we believe that you’re supposed to work with friends. It’s been that way from the beginning and it remains that way 11 years later. Like all friendships, there are rocky moments and it might not be for everyone, but for us, it’s been core to how we’ve built the team and has been an integral part of our success.”

This business model is evident in Langner’s explanation of his job.

“There are all kinds of great people working here,” he said. “There are great perks as well, and I definitely plan on staying here for a while.”

He talked about a trip that evo promotes that takes people on a snowboarding trip to Hakuba, Japan, which includes airfare, lodging, as well as the cost to ride for five days. Although he said it’s not in his plan for the next year, it’s one of the bigger trips he wants to go on.

“It gets people who are really passionate out there together,” he said.

Langner, who also writes for his company’s blog and works in the shop, admitted not every aspect of the job fits with his skill set.

“I’m no journalist,” he said. “But the thing is, I enjoy writing about the things I like doing. I’m able to write more casually about what I have passion for. But it’s nice to do my research along the way–I’m learning a lot at my current job.”

The job market in Washington is where Langner said he needs to be in the future, but he noted that he’s not opposed to eventually moving back to his home state of Michigan.

“I would love to work my way up in a company,” Langner said. “It would be pretty cool to be a snowboard buyer some day and be able to have that influence. I know a good amount of people though who have fallen so far into the business side that they don’t even use what they sell or they eventually lose interest. I don’t want to do that.”