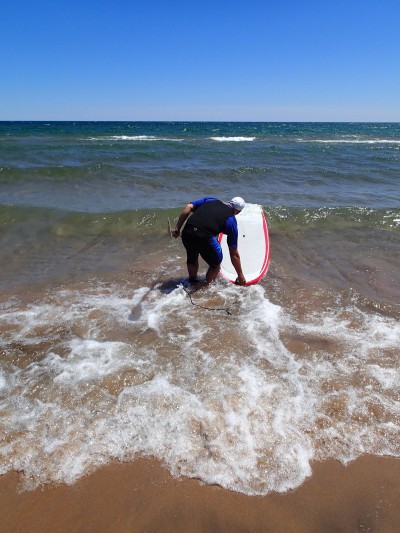 Water defines Michigan. Even from outer space you can’t confuse our two peninsulas with Wisconsin or Minnesota. We’re just bluer than that. Except for Alaska, we have more water frontage than any other state. Connected to four of the five Great Lakes (Lake Superior, Lake Michigan, Lake Huron, and Lake Erie), we total up 3,288 miles of shoreline. It’s no wonder we top the nation with approximately one million registered pleasure boats–and that’s just counting boats that require registration. Who knows how many folks have been trying and buying stand up paddleboards, or SUPs?

Mik DeBoef has a pretty good idea. As a rep for Surftech he travels the country with his white Sprinter, pulling a trailer loaded with his company’s latest inventory. Over the years he’s taught hundreds of folks how to stay balanced on a board and catch some waves.

This hearty wave walker, dressed only in swim shorts and a shirt–not the traditional Lake Superior wetsuit–didn’t even mind the water temperature. Breaking waves tired to toss him, and a couple of times he was baptized, but his cat-like reflexes made quick adjustments, and his skills prevailed, including the quick paddle strokes and edging to bring the board back 180 degrees for the ride back to shore.

Wet and a little breathless but still smiling, he shared, “I could do this all day.” And many days he does as he spreads the gospel about SUP and the technology that goes into the shape and fabrication of the boards.

“These (the Laird 12-footer) are designed as an all around board; good in flat water as well as rougher conditions.,” explains DeBoef.

“They work well for beginning paddlers yet excel in waves for more the more experienced. Truly a perfect board for the conditions at Bohemia.”

And that’s exactly what the resort was looking for when it added SUP to its Triple-A agenda: Adventure, Action, and Affordable.

“You’ve got to play to your strengths,” says Glieberman, “and for us that’s wilderness and water. We not only have the best of both, we’ve got the best of both water too–Lake Superior and Lac La Belle.”

Conveniently located on Lac La Belle with easy access to Lake Superior, Mount Bohemia has much to offer stand up paddleboarders.

DeBoef agrees, “With the proximity to the inland lake this is an ideal site to teach SUP and to paddle.”

When winds kick up on the Great Lake, paddlers can move to more sheltered waters including the bayous and channel around Lac La Belle, French for “Beautiful Lake.”

“That’s the beauty of kayaking and paddleboards,” says Ron Thorley, a Marquette paddler and guest at Bohemia. “It’s not just the water, it’s where the water can lead you.”

The Bete Grise Preserve aprons the foot of Mount Bohemia. It includes 1,104 acres of wetlands and 7,500 feet of Lake Superior shoreline as well as a significant amount of frontage on the sloughs of Lac La Belle. Known as one of the highest-quality dune swale wetland systems remaining in the upper Great Lakes, it has been preserved since 2004 in order to remain in its natural wild state.

“We had this right here in our backyard,” says Glieberman, “and now we have the gear and the guides to make it accessible to paddleboarders and kayakers.”

While the water attracts both sports, Bill Thompson, part-owner of Down Wind Sports, is spending more time on his SUP than in a kayak. His reason: it’s all about time.

“The learning curve on a board takes less time,” says Thompson, “and it’s faster to get on the water.”

Thompson guesstimates it takes five minutes to get his paddle and board to the beach, and he can manage it solo. SUPs weigh between 20 and 30 pounds, whereas kayaks are 40 to 55 pounds, making loading a kayak–for most–a two-person job.

Both sports require a paddle, but Thompson is a strong swimmer so rather than wear a personal flotation device (PFD), he tethers the SUP to his ankle and the board becomes his flotation. He doesn’t need a spray skirt either.

“It’s so much simpler,” contends Thompson, who also fishes from his SUP.

“I’ve fished from my kayak too,” adds Thompson, “but I can see so much more in the water when standing on a board.”

“When I kayak, I like to be as close to shore as I can get, to really explore the waterline. That’s where it’s most interesting.” But he admits, “Standing on a board there’s really a difference in the vantage point. You can see so much more when you look down into the water, rather than from sitting in a cockpit.”

Thorley’s buddy Joe Constance and his wife Ann are avid paddleboarders and they are luring him out onto various areas on Superior.

“They want to show me where you can paddle over some shipwrecks.” He adds with a smile, “I’ve been kayaking these waters for nearly 20 years but now I’ve got a lot of shoreline to revisit.”

In addition to boards and paddles, the resort has wetsuits and PFDs included in their daily rate of $95 per person per day. The fee also covers guides who can help guests get started. And then there’s the best part about a day of paddling at Bohemia–you can spend all your energy playing because you don’t have to worry about cooking dinner. Meals are included, too, and served in the North Pole Bar at the resort headquarters.

For reservations and more information dial up 231-420-5405 or visit mtbohemia.com.