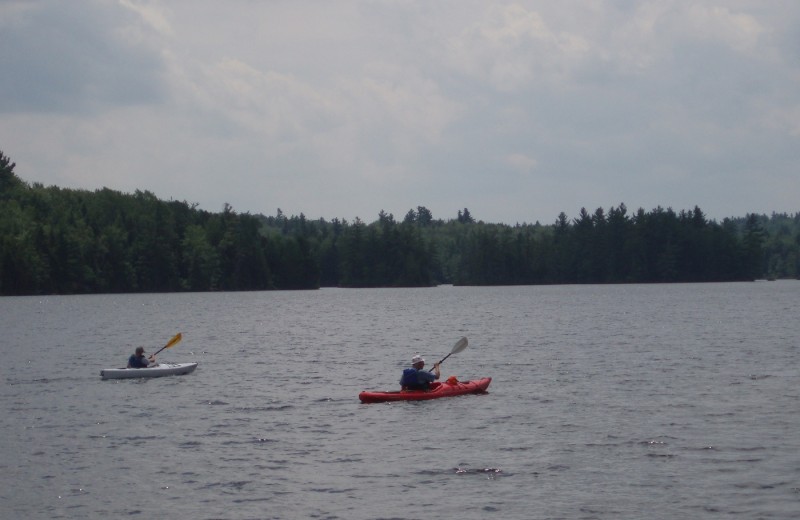 Unspoiled Grafton Pond in New Hampshire is a prime location for paddlers.

The loons and Canada geese put on a show.

First came the flotilla of seven long-necked geese in the secluded inlet. The team actually took a break from eating shoreline blueberries—the leader used his beak to knock the berries into the water so the rest could eat—to approach the kayak as if looking for bread handouts to go with those sweet berries.

The shrill tremolo of the loons called us—paddling partner Jan Duprey and I— to another cove and there, through the binoculars, were four loons. Mom and dad looked stately with red eyes along with their checkered black and white feathery coats. But the informal kids weren’t as formal. Fluffy with brown feathers, the chicks followed the folks around both on top and under the water. Kids being kids, they sometimes left the folks behind for a short out-of-sight trip only to be called back in a hurry.

These vignettes were performed on the watery stage of Grafton Pond, New Hampshire’s Broadway for flat water paddlers.

Grafton Pond paddles much bigger than its enchanting 324 acres. Coves, more than a dozen islands, marshy cul-de-sacs, and a wealth of flora and fauna make exploration easily a day-long affair. Surrounded by some 1,000 acres of woodlands, the pond is part of the Macoma River watershed that feeds the Connecticut River.

The unspoiled pond is nearly devoid of development, save for a neat dam in a western cove by the active, dirt Potato Road put-in, and a handful of handsome and mostly-hidden homes. Located between the central New Hampshire towns of Grafton and Enfield, much of the forest around the pond featuring an undulating hillside was once paper company land and has been protected by the Society for the Protection of New Hampshire Forests since 1984. The state oversees the boat launch and owns those welcoming islands (camping and fires forbidden), wonderful for a picnic followed by a short afternoon snooze under the pines or on a sunny rock ledge.

Conifers—hemlock, balsam fir, and red spruce—abound along the shoreline. Blueberry bushes are common and appear to be a popular buffet stop for wildlife. Giant rocks (and spider-like roots) sprout from the water. Wide and smooth granite ledges sit in the shallows. Both submerged rocks and roots can snare passing paddlers for a moment or two.

Heron branches, moose rocks, loon sticks, deer boulders, and other figments of an active imagination also frequent Grafton Pond in abundance, especially before using the binoculars. Gusty winds can flare up and make paddling in the pond’s interior a bit testy.

The pond is prime loon nesting territory and also sports other winged wonders like osprey and herons. Beaver and moose have been known to show up while anglers cast their hopes and lures for smallmouth bass, pickerel, perch, and bullheads.

Grafton Pond has much to offer fishermen, swimmers, paddlers, and birders. But what’s also a plus is what it doesn’t have: gasoline fueled motorboats. Only electric motors are allowed, and not more than six horsepower.

A simple circumnavigation is all that is needed to enjoy the pond. We launched recently from the boat ramp and opted for the counterclockwise approach. In no time, the curtain is raised on nooks, crannies, and downed trees. Try to fit between rock and shore. Take note of an island to return to another time. Follow the shoreline. Paddle to a forested bend that could be an island but is a dead-end instead. Feel the breeze. See two vans of paddlers descend to the shore but know that solitude is found in the next inlet. Look up to 3,155-foot Mount Cardigan in the northeast. Watch as a quartet of moms in floppy hats vacate a rock island after sun bathing and swimming in the pond’s north end, and see in a matter of minutes as a swarm of paddlers commandeer it for themselves. Round another bend and find solitude.

Whether it be a one-man show, a flashy and loud musical, or a ducky comedy, Grafton Pond is an alfresco theater sure to please the diversity of outdoor lovers who frequent its protected waters.