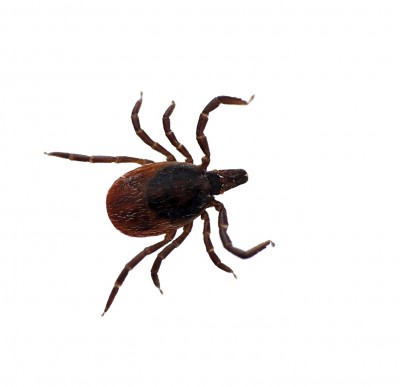 A black-legged deer tick. Deer ticks are the most common vectors for Lyme disease transmission.

School is out. Summer vacation time is here. If you are heading off to the woods for some R&R, you may be greeted by some nasty little vampires who want your blood. If they succeed, you may pay a heavy price.

In the early 1970s, Polly Murray, a Connecticut mother, called attention to clusters of mysterious illness among New England children, “juvenile arthritis”—aches, pains, fever, fatigue, joint problems, etc. which at that time had an unknown cause. Ultimately the “juvenile arthritis” clusters were named “Lyme disease,” after Old Lyme, Connecticut, where the condition was first identified.

In 1981, Dr. Willy Bergdorfer discovered that Lyme disease was caused by a microbial infection, and those microbes were carried primarily by the deer tick. Hence the Latin name for the spirochete microbe, Borrelia burgdorferi. Since then at least four species of the Borrelia microbe that cause Lyme disease have been identified, and the disease has been reported in all 50 states, China, Europe, Japan, Australia, and parts of the former Soviet Union.

No one knows how long Lyme disease has existed, but as awareness has grown, reported cases continue to rise. It’s now the most common tick-borne disease in the Northern Hemisphere. Lyme disease is most common in deer-rich New England where the whitetail population is 60 or more animals per square mile, as opposed to the normal eight to 20 in the wild. In some New England towns, half the residents (or more) have or have had Lyme disease. And it’s spread across the country, thanks in part due to the whitetail deer herd mushrooming to more than 30 million, the largest in recorded history.

Today, there are at least 20,000 cases of Lyme disease reported each year in the U.S., and the Centers for Disease Control and Prevention (CDC) admits that there may be 10 times that many. Diagnosis is a key problem. On June 25, 2013, Maine Governor Paul LePage signed a bill requiring the Maine Center for Disease Control and Prevention to tell people on its website that the International Lyme and Associated Diseases Society Physicians says false-negatives for Lyme disease occur 54 percent of the time.

If you do get a tick bite, one symptom of Lyme disease is a bull’s-eye red rash that can appear as soon as three days or up to a month later. However, only about 20 percent of people infected may get the rash.

According to Dr. Andrew Weil, “in 2005 both the FDA and the Centers for Disease Control cautioned against tests for Lyme disease used by some commercial laboratories […] Neither the accuracy nor medical usefulness of these tests has been adequately established. Legitimate diagnostic testing for Lyme disease should begin with an enzyme immunoassay. If you test positive or the results aren’t certain, the next step is a standardized Western immunoblot assay.”

Fever, fatigue, joint pain, and body aches are some of the initial symptoms. Of cases reported to the CDC, the national ratio of Lyme disease infection is 7.9 cases for every 100,000 persons. In the 10 states where Lyme disease is most common, the average exceeds 30 cases for 100,000 persons. About 99 percent of all reported cases are confined to just five geographic areas (New England, Mid-Atlantic, East-North Central, South Atlantic, and West North-Central).

There have been experiments with vaccines, most notably LYMErix by GlaxoSmithKline, but side effects resulted in it being withdrawn from the U.S. market in February 2002. There are several approved vaccines for dogs, which can also catch Lyme disease. Treated with antibiotics (doxycycline, amoxicillin, or cefuroxime axetil) during the early stage, most people and pets are cured.

An alternative treatment approach involving Chinese medicine–herbs and acupuncture–has been developed. In the book Lyme Disease and Modern Chinese Medicine, Dr. QingCai Zhang and Yale Zhang describe this method and report results superior to antibiotics. This is certainly worth checking out.

But what happens if you don’t know that a tick has bitten you and the disease gets established in your body? Or worse yet, a tick may be carrying more than one disease, or a medical professional may fail to recognize Lyme disease.

A powerful documentary: Under Our Skin

The 2009 feature-length documentary, Under Our Skin: The Untold Story of Lyme Disease, tells a powerful story that gets under your skin and into your heart as you watch half a dozen people go through Lyme disease hell, including new bride Mandy Hughes, who nearly dies; Elise Brady-Moe, a Lyme disease carrier who is terrified that her newborn son will test positive for Lyme; Dana, an event producer for U2; and Ben Patrick, who might have been a Major League Baseball player if he had not contracted Lyme.

For years the medical establishment has said Lyme disease was only an acute microbial infection. This film convincingly argues that it may also have an insidious chronic form; a progressive degenerative disease that can cause painful neurological symptoms and arthritis, as well as other conditions that may be diagnosed as ALS, MS, Alzheimer’s, Parkinson’s, psychosomatic illness, and a number of other mysterious serious and sometimes fatal diseases that have no real known causes or cures. Could Lyme even be a cause of these diseases?

The case for the existence of chronic Lyme disease is powerfully made in Under Our Skin. We see many people seriously ill, hear stories of hundreds of thousands of dollars spent on treatments that do not work, and learn of others who have died from what their survivors believe was Lyme disease. The stories of suffering are interwoven here with some gorgeous nature photography that yields a tapestry of feelings that moves the viewer to ask serious questions about modern medicine.

In all fairness, most doctors are not researchers. Diagnosis is based on tests, experience and gut reactions. Each person is unique. Keeping up with new discoveries is not easy. In a situation like this labeling all non-believers as bad, stupid, or evil serves no purpose.

The lack of a cure for seriously ill people is what should move sufferers and their families to search, and there are many courageous people in this film. One of them is Connecticut Attorney General Richard Blumenthal, who takes on the panel of physicians of Infectious Disease Society of America that developed the guidelines for diagnosis and treatment of Lyme disease. He finds many conflicts of interest, and insurance companies that do not want to pay for lengthy treatment of a disease that some say does not exist.

Aside from those suffering from the disease, we also learn about brave doctors who treat chronic Lyme disease patients and risk having their licenses revoked, ultimately suggesting that the state of Lyme disease treatment is as much a political condition as a medical one.

One of the brave ones is pathologist Alan Macdonald, who has had to create his own laboratory in his basement to do his research. From years of open-minded hard work, he reports that Lyme may be a biofield disease, which explains why it can be chronic. Analyzing brain tissues of seven people who died of Alzheimer’s, he finds all tested positive for Lyme disease. Those discoveries could have dramatic ramifications for modern medical diagnosis and treatment of more than Lyme.

If the state of Lyme disease is in reality a political and economic matter as much as a medical one, drastic action needs to be taken. Lives are at stake. This film is a wake-up call that should reverberate through the halls of Congress, as well as doctors’ offices and research facilities across the U.S. Hopefully it will lead to definitive research on Lyme that will save lives, possibly even give us clues about some maladies that have no known cause.

Three years in the making, to get a copy “Under Our Skin” go to the Open Eye Pictures website, http://www.underourskin.com/ where they can be purchased. It should be aired at outdoor sports clubs, schools, conventions and sports expos across the US. It might save some lives.

An ounce of prevention is worth many pounds of cure. I’m not a big DEET fan, but tick repellants are out there. Use them.

Wear long-sleeve shirts, light-colored clothing, and tuck your cuffs into your socks when you are in wooded or brushy areas. I’ve found that lightweight silk long underwear also seems to help keep the little critters off your skin.

Check for ticks every time you have spent some time outside, or when you pet the dog who has just come inside. A daily check when you take a shower should be mandatory for people in areas with heavy tick populations. Remember that ticks are tiny and like to crawl into areas under your underwear.

If you do find a tick on your skin, and they are tiny, don’t panic. Remove it gently with tweezers and apply antiseptic like iodine or alcohol to the bite. Fortunately it takes time for a tick to attach to a person and for the microbes to be transmitted. I’ve been told by a leading researcher that it takes 12 hours before sufficient microbes have been transmitted to infect someone, but don’t quote me on that. The sooner you get the tick off the better. Only about half the ticks may carry Lyme, the nymph stage is the principal vector and not everyone who gets bitten will become infected.

Reducing the populations of animals that serve as vectors for ticks–mice, wood rats, and deer–can also reduce the chances of transmission. So, deer hunters, hikers, outdoorsmen and women of all pursuits–get to it. But take care. Wear elbow length rubber gloves when cleaning your deer.

For more information about Lyme disease see: the Lyme And Associated Diseases Society.