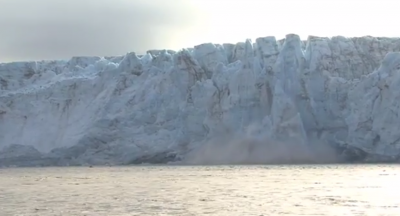 Against the backdrop of this gigantic glacier, surfers Garret McNamara and Kealii Mamala look like small dots.

What exactly does Garret McNamara, the man who surfed the world’s tallest wave, do for fun? He sits beneath 150-meter tall glaciers in the cold waters off Alaska on a jet ski or surfboard, waiting long hours for a glacier calving. When ice at the edge of a glacier breaks off and plummet into the water, it releases energy that transitions into some truly frightening waves.

That is the moment that McNamara waits for.

“I was up to my neck in water, looking up at this 90-meter tall glacier, waiting for the ice to break off and hoping that it’ll fall straight into the water–because if it falls flat you’ll be squashed under it,” McNamara told CNN.

The intrepid surfer became the one of the first to surf a glacial wave in 2007, along with longtime friend and fellow surfer Kealii Mamala. The two waited seven days on the ice-cold water, often spending 20 hours a day submerged. When the ice finally broke, it unleashed a wave that almost overwhelmed them.

“It was probably the closest I’ve ever come to death,” McNamara admitted afterwards.

The wave was filled with shards of freshly chipped ice, rocks, and other debris that could have easily injured the surfers. The power behind a glacier calving is not to be underestimated. Although the waves were only one or two meters high, they carried behind them bone-breaking strength. Rumor has it that these waves are capable of flinging fish into the treetops of Alaskan forests, which might explain the phenomenon of hunters encountering dead salmon in the woods.

Shortly after his trip to Alaska, McNamara began hunting for the world’s largest waves off Nazarè, Portugal. In 2011 he found his watery behemoth, a record 78-foot wave that cemented McNamara in surfing legend. Not content to sit still, McNamara returned to Nazarè in January of 2013 and caught an even larger, unconfirmed 100-foot monster. Odds are that this surfer is still not done, but he might be finding it hard to upstage his own past accomplishments.

“I’m looking for the rush,” McNamara said. “But lately I’ve had a really hard time finding it. When I surfed the glacial wave it was mind-bending, it was the heaviest rush. But since that day I’ve found it difficult to get that rush in the ocean. It made me realize how comfortable I feel on big waves.”

You can read about the 2013 Nazarè wave here, or watch video of the 2007 glacier attempt below:

Image screenshot of video by Ryan Casey on YouTube