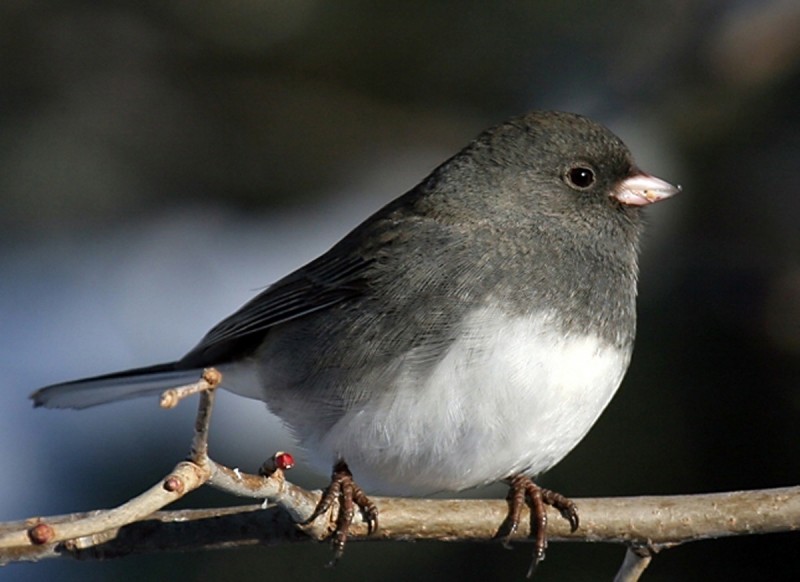 Dark-eyed juncos have long fled from beneath our feeders in central Wisconsin, giving way to summer subletters like robins, grackles, and orioles.

Six weeks have passed since we last saw dark-eyed junco birds hopping and foraging beneath our feeders in central Wisconsin.

The junco birds fled north with the redpolls in late April 20, giving way to summer subletters like the robin, grackle, indigo bunting, Baltimore oriole, and rose-breasted grosbeak. The chickadees remain, as do flickers, cardinals, blue jays, house finches, gold finches, and house sparrows; as well as the downy, hairy, and red-bellied woodpeckers.

My wife and I have mostly taken junco birds for granted all these winters, almost dismissing them as just another pretty little bird, even though we know their name and face. Still, we’ve never confused them for house sparrows. We aren’t that disrespectful.

How did we so consistently look past the dark-eyed junco, one of our continent’s most abundant forest birds? I mean, they’re not rare. Partners in Flight, a bird conservation cooperative, estimates 260 million junco birds live in North America, which ranks them second only to robins. Another recent estimate put their population at 630 million, according to the Cornell Lab of Ornithology.

Maybe it’s a case of hiding in plain view. Like yuppies in white shirts and dark suits, this bird with its slate-gray back and white undercarriage blends into any crowd, even as it flits and flashes between feeding grounds and house-hugging hedges. It’s as if Mother Nature created a generic bird in such abundance that they’re often seen but seldom noted.

Then again, maybe I’m the only one not paying close attention. According to Project FeederWatch, a Cornell project, junco birds are sighted at more winter feeders around North America than any other bird. Specifically, more than 80 percent of respondents reported junco birds at their feeders.

But I have noticed some of their feeding habits. They don’t perch on pegs to eat from tube feeders. No, they’ll dance a few hops atop a platform feeder, and then drop to the ground for serious foraging of seeds, corn and millet. A New Hampshire study found that junco birds spent 65 percent of their time on the ground.

And to survive cold and wind, junco birds often hunker in the lower branches of ornamental shrubs and small trees by homes and buildings. In fact, the New Hampshire study says juncos spend 20 percent of their time in shrubs and 16 percent in saplings or low-growing trees. I’ve never verified those figures, but if you startle hunkering juncos when rounding the corner to refill feeders, they’ll whir into flight as a flock, startling you in return.

And you can’t help but appreciate that juncos flout the migration patterns of higher-profile birds. The Cornell folks call juncos the “snowbirds of the middle latitudes.” That is, they migrate south from Canada shortly before winter, but go no farther than Minnesota, Wisconsin, Michigan, and New York. At winter’s end, they return to Canada to nest and raise young.

That makes them far better predictors of winter and spring than caterpillars, groundhogs or the Farmer’s Almanac. Ryan Brady, an ornithology researcher for the Wisconsin Department of Natural Resources in Ashland, says it’s simple: when juncos appear at your feeders in October, take heed. They’re carrying winter on their white tail feathers. Likewise, when juncos disappear from your feeders, rejoice. They’re taking winter with them.

The bird that my wife spotted, which I would later find out is a leucistic dark-eyed junco, feeds with two mourning doves in foreground.

Again, though, I overlooked such admirable traits for years. If not for an unusual junco that stopped by regularly in mid-April, I again probably wouldn’t have noticed the little birds’ departures. During lunch one day, my wife, Penny, mentioned a small, white-headed bird perched on our gazebo’s railing.

“A small bird with a white head?” I asked skeptically.

“Yes,” she insisted. “It was about the size of a sparrow, but its body was light gray and white, and its head was totally white.”

“Are you sure it wasn’t a chickadee? They have white cheeks and a gray body.”

(Insert eye roll here.) “No, it wasn’t a chickadee. I know a chickadee when I see one.”

Still, I was busy, so I didn’t page through our bird encyclopedia to study color mug shots of North American birds. Later, I typed “small bird with white head and gray black body” into Google, and studied bird photos for a few minutes. Nothing.

Then I forgot about it until looking out a window after breakfast two days later. There, 15 feet away, was Penny’s white-headed bird, hopping like a junco beneath our feeders, searching the ground for food alongside squirrels, juncos, and mourning doves.

I retrieved my camera and sneaked up to our dining room window, which is about eye-level with ground-feeding birds. After emailing some photos to Brady, we soon had our answer.

“It’s a leucistic dark-eyed junco,” Brady wrote back. “They’re uncommon but not rare. Think of it as a partial albino.”

Well, no wonder we didn’t recognize it as a junco. It was in disguise. Not only was its head white, but its legs were pale pink. Most juncos have dark legs. Also, its beak was pale pink, just a bit more pale than a normal junco’s yellowish beak.

The photos also helped us pinpoint when the juncos left to fly north. My most recent junco photos were taken April 23.

Something tells me we’ll be watching for juncos this fall. We might not welcome this harbinger of winter with the same pleasure we show robins in spring, but we’ll take note and brace for winter.