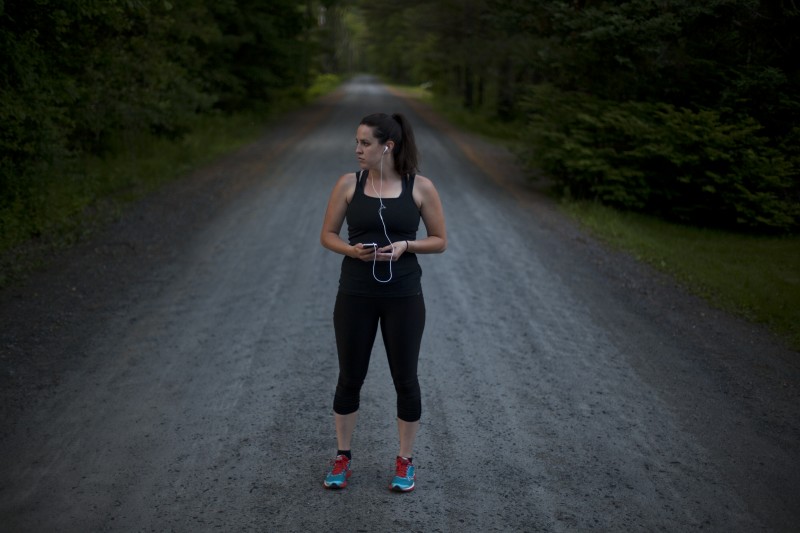 Libby March before a run in Vermont on Sunday evening, June 9, 2013. Image by John Tully.

Communicating something to people–bringing empathy to the world in some way. That was what fueled Libby March to become a photojournalist.

“I decided to be a photographer around my senior year of high school. I’d spent my teen years thinking I wanted to write, but photography didn’t seem like a huge switch,” March said. “Originally in college I was an art photography major, but I took a photojournalism class my sophomore year and realized the power of real-life pictures. Truth, or life, is stranger than fiction. I wanted to tell stories that showed our lives, the best and the worst parts.”

She said it’s the people she forms relationships with while working who make her job worthwhile.

“Photographing is fun, but what I love about photojournalism is the experience of meeting people I never would’ve come in contact with, and places I never would have gone, unless I was working,” March said. “It’s been this wild, demanding journey.”

In her work, she traveled to Haiti several years ago, cried with a woman who had just lost her baby daughter, and spent four days immersed in the culture of a music festival.

March’s former photojournalism professor at Central Michigan University, Kent Miller, said the photographs from her trip to Haiti have become iconic in the photojournalism program, as he shows them as examples of strong visual storytelling to current students.

“I’m privileged to see and document everything from the beautiful to the mundane to the tragic,” March said. “People allow me into their lives, and I record their stories. It moves and changes me every time I get to really dig into a long term project. I get very attached to the people I work with.”

March’s boyfriend, John Tully, described her as someone who launches herself fully into her work.

“I know it’s easy to say someone is a hard worker and especially be biased when it’s someone they love, but Libby is truly one of the hardest working people I know,” he said. “I knew this long before we started dating. The photojournalism community is fairly small and everyone tends to know everyone, so I first met Libby through a mutual friend back around 2008. She was still figuring stuff out, as I think we all still are, but when she finds a passion, she doesn’t let it go. Photography. People. Running. I tease her that she ‘loves everyone and everything, always,’ but I honestly believe that is largely true.

“I think it may be this idea that time shouldn’t be wasted. Everyone everywhere is important. There’s a genuineness to us and it’s the little things in life, the moments that we take for granted and pass by that she works so tirelessly chasing,” Tully said. “Sometimes to the point of exhaustion, both emotionally and physically. She talks about this as being her calling. Libby uses a camera to tell stories and so she has to work to put herself in the right place at the right time. I don’t think people realize how much work goes in to telling a story or making a photograph.”

Miller said March was a student with enthusiasm and a seeking mind from the start.

“Libby always wanted to make a difference with her camera and she does so to this day,” he said. “What I admire most about Libby is her ability to compassionately engage with her subjects creating an intimate bond that results in compelling stories.”

March after she finished a race in 2011. Image by Neil Blake.

In addition to having a full-time career as a photojournalist, March is also a runner, which became an momentous part of her life in 2011.

“Running does something for me that nothing else can,” she said. “It’s not something that came naturally to me or something that’s even fun to do a lot of the time. It’s hard. You have to get up earlier, you have to slug through rain, you have to try to breathe when it’s 90 degrees out. But when I finish, or when I’m at the end of the third mile, or I dragged myself out there despite freezing temperatures, I feel like an Amazon. No one else was out there doing that for me. I did it. I’ll never run the fastest or the furthest but I am a runner.”

“When I run, I appreciate what my mind and body can do,” she said. “The first summer I started running, I was taking a break from dating, and I always said running was my boyfriend.”

Although March has not yet participated in an official race, she began with her first 5K in October 2011.

After training in December of last year for a half-marathon, March was injured with a sprained ankle and partially torn ligaments, forcing her to take nine weeks to recover.

“That’s something that’s a real mental block for me–injuries. Not being able to run makes me crazy, and yet it’s so hard to get the habit back once you’ve been on the bench for so long,” she said. “As far as training goes, I’m not what you’d call a competitive runner, so I don’t always follow a strict regimen. I do the standard 10 percent increases per week. Tempo runs, hill work. I like to run in different places.”

Because of her work, March has moved to a new city about every six months. She said she always keeps a pair of running shoes in the car so she’s able to exercise no matter her location.

“Recently I ran in Vermont, New Hampshire, Wisconsin, and Michigan all in one week,” March said. “Variety like that I think is one of the most important training tools. Varying distance, varying speed, choosing different road routes or trails, running on the beach, running in water. Just get out there, you know? Move, breathe, enjoy the run.”

With these frequent moves around the country, March has called many places home and has worked at the Jackson Citizen Patriot, Concord Monitor, Central Michigan Life, Midland Daily News, Muskegon Chronicle, and the Valley News as a staff photographer, intern, and freelance photojournalist.

Influenced by a job that keeps her on the move along with her love of running, March said eating well is one of the most important things athletes can do.

“Nutritionally I think it’s important to eat ‘real food.’ The fewer ingredients, the better. I like that idea of ‘eating clean;’ getting as many fruits and vegetables as you can and making sure you’re packing in the protein,” she said. “I don’t really believe in dieting or cutting out certain food groups–I’m certainly no fan of eliminating carbs! I don’t calorie count and I love bread. But I try to eat a lot of protein and greens. I’m a vegetarian so that means a lot of soy products and black bean burgers. And I have a strong belief in the power of spinach. Also blueberries. All those good old ‘super foods.'”

“Photographing sports is its own bird because it’s mostly reacting to the action, but I approach a sports assignment the same way I do any other assignment,” she said. “I show up, observe the scene for a little while, scope out the good light (if it’s outside), look for interesting people both in the action and watching it. And then I shoot, motion and emotion.”

She said when she is photographing runners, she is instantly inspired to run herself.

“Running is both a solo and a communal sport, so when I see a runner I feel like I’m part of something,” she said. “That’s a different feeling than I get from shooting any other sport, because I actually do run. So it’s odd photographing runners because when I’m at a race, I don’t want to shoot at all, I want to be running,” March said. “I focus on taking pictures and showing the strain of getting through the race, the exhaustion or exultation at the end, the family and friends cheering on the runners, but the whole time I’m just thinking over and over that I wish I was in the race and planning my run for later in the day.”

March’s time at the Valley News ends in July, and so far, she does not have set plans. Although she has grown to find a place in her heart for newspapers, she said it was never her end goal to work as a staff photographer.

“They’ve been an incredible place to learn, but I always saw myself working independently on projects or as a stringer for various publications,” she said. “It’s pretty scary, but freelance is still what I want to do, and wherever I end up, I’ll be working to build a steady clientele with a variety of assignments, from commercial to editorial to portrait. My passion, though, is working on long-term stories. I like to dig in and immerse myself in a life and be there for every intimate moment, and all the little details in between that we so often take for granted or disregard.”

She said she also has a love for humanitarian photography, which influenced her desire to eventually become heavily involved with nonprofits.

“I got into photography because I wanted to make a difference, be it great or small,” March said. “My friends like to say I’m a ‘bleeding heart.’ I don’t take myself that seriously, but they know me well. It’s probably terribly idealistic, but my greatest goal is still to move people through documentary work. I want to make pictures that inspire empathy and courage.”