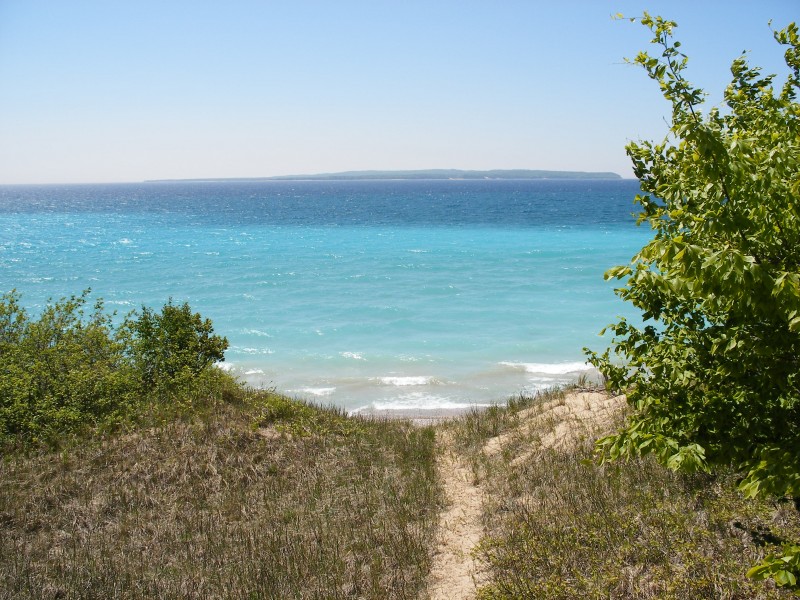 My first experiences backpacking for more than a simple overnight trip came during my elementary through high school years I spent attending summer camp in Michigan.

In the months between middle school and the start of ninth grade, the group of girls from camp and I began to go on more extensive trips, the most memorable of which was a backpacking trip to North Manitou Island. I remember climbing out of the musty red van that was used to transport the load of us, probably 10 in total, from Newaygo to Leland in a drive that took about two and a half hours.

As I stretched my legs in the parking lot, the rest of the campers piled out of the van and slumped their way to the nearest grassy clearing next to a small playground, swarmed by young, screaming children waiting for their parents to retrieve them after purchasing ferry tickets. The majority of these families were traveling to North or South Manitou Island on day trips–ones that wouldn’t be too overwhelming for young kids.

As soon as everyone was gathered around with their overflowing packs piled on top of each other in the middle of our newly-formed human circle, the leader of our group climbed on a nearby rock and started to share will us the details of our trip as she meticulously retied the blue bandanna she used to keep her hair out of her face. She said the ferry would take about an hour to reach the island, but we all took advantage of the 15 minutes before we were scheduled for departure to stretch out on the ground, our bags supporting our heads like rocky, oversized pillows. Short on sleep from the late-night campfire the day before, it only took me about five minutes to sink into a mild sleep, eased by the warmth of the sun hitting my face, somehow overpowering the sounds of playing children 20 feet away from our resting group.

I was awoken by our trip leader clapping her hands and shouting that it was time to board. Still trying to wake up from my short afternoon nap, I heaved the giant pack over my shoulders and walked toward the dock, feeling a bit wobbly as I looked down into the water while climbing on to the ferry. I let the thick, padded straps of my backpack slide down my arms as I eased its full weight to a bench seat built into the boat.

The ride seemed to pass by quickly, but that may have been because of my constant daydreaming, with one arm hung over the side of the mildly rusted ferry while I stared intently at each blue-gray wave that crept up the body of the ferry. It was not often that I looked up and monitored the other passengers, and I can say the same for my fellow campers, for we were all fighting prolonged exhaustion that was only worsened by the beginning stages of sea sickness.

When we docked, a group of people who worked for the transit began to unload everyone’s gear. This was accomplished by one young man standing in the ferry and tossing each pack underarm to another worker standing on the dock. I sat on the edge of the high dock with my legs hung over the side, and thought to myself that it wouldn’t be long until one of backpacks, which were so full they resembled stuffed sausages, would fail to complete the desired voyage and plop down into the cold water below. It took about five minutes before this happened.

Whether caused by inexperience on the job or an overall laziness, I’m not sure, but the ferry’s captain was not pleased (I can only assume he was the captain by the authority relevant in his yells toward the young worker). I began to tune out of the situation because the bag was not mine, but I felt sorry for whoever was forced to carry around a damp pack for the rest of their trip. The ferry worker was told to jump in the water and retrieve the bag, which he would bring back up on dock via the nearest ladder. Once the bag’s owner recovered from his anger at the realization he was screwed, we all made our way down the dock to the shore. Here we were given directions as to the rules of the island. The main idea was to keep the land as preserved as possible by respecting the natural environment and cleaning up after yourself.

The island is roughly eight by four miles long, and we hiked most of it during our four-day trip. This was the first time I had carried a full backpack, complete with a tent, sleeping bag, and cooking supplies in addition to my clothing. I was starting to feel the weight on my shoulders after an hour or two of hiking. At 14 years old, my body was not yet trained to carry that amount for an extended period of time. When we finally decided to camp for the night, we picked a deserted, tree-covered site in the middle of the island. By this time my feet were badly blistered and I wanted nothing more than to go swim in Lake Michigan and heal my wounds as the sun was setting, but our location made that impossible.

After a short dinner, insufficient for my at-the-time vegetarian diet, I was forced to go to bed with a rumbling stomach–one of the worst ways to attempt sleep before a full day of backpacking. But it was the views of the following day’s hiking that made everything worth it. I felt as if I had traveled across the country rather than simply covered miles of one island. It wasn’t covering the most distance I was worried about, but more so exploring as many details of the land as I could. The northwest corner of the island holds the highest elevation at about 1,000 feet above sea level. There are wooded trails, open fields, sandy shorelines, and steeper dunes that give visitors a variety of elements to experience.

The island was famous in the lumber industry and I was most intrigued by the buildings that are scattered around North Manitou, and even more so with the cemeteries. Being able to connect to the land through the people you learned once lived there is something I find worthwhile on my trips. When kneeling beside a crumbling grave, brushing aside the tall grass growing high around its edges, you begin to understand the history of the island.

After several days of exploration, our group spent the last day backpacking to near where the ferry would pick us up the following day, pitched camp and made our way down to the beach. The sky was perfectly clear and you couldn’t have asked for a better day on the water. Though the temperature was cold, every one of us was overjoyed to see the water. We let the weight of our packs fall to the ground clumsily as we raced to see who could make it to the water first. We assured that our entire campsite was completely set up before leaving for beach, and that decision was one of the best I’ve ever made, as the sunset that evening is one I’ll remember forever–one where the sky resembles a tie-dyed shirt of pink, purple and blue seamlessly melding together.

The sun sets on North Manitou Island, as seen from Glen Arbor.

While this was primarily a backpacking trip, visiting North or South Manitou is a great option for day trips or simple overnights. You can choose to camp deep in the woods or stay closer to shore, which is especially convenient if younger children in your group are being introduced to the camping lifestyle.