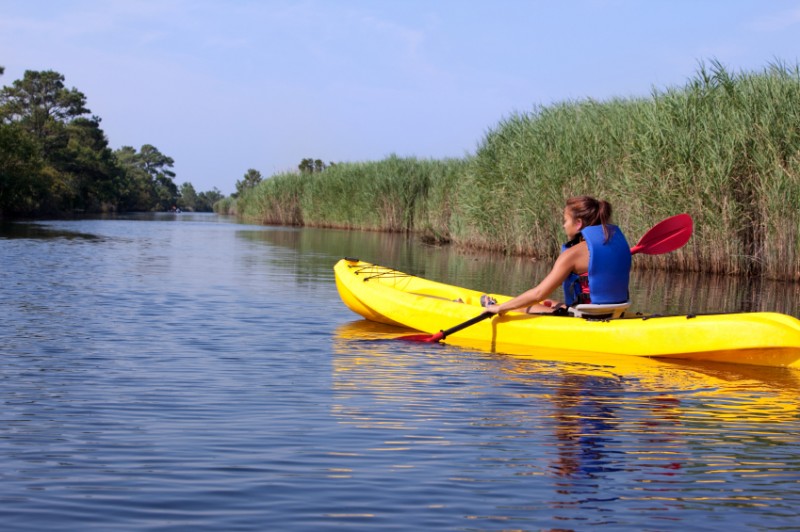 I was 12 years old the first time I went kayaking by myself. I was hooked.

Before then, the only times I ever kayaked were not what I would consider the most invigorating experiences, as I simply sat in a two-seater while an older, more experienced adult did the paddling and I was left to stare out at the water. Growing up in Michigan and surrounded by the Great Lakes, there was no shortage of opportunities for me to be on the waves. It was not until my first time in a kayak alone that I found my niche.

I was on Pickerel Lake where I spent the summer at Camp Newaygo, an all-female camp I attended for six years during childhood and into my teenage years. On Sunday of each week, campers waited patiently in lines that trailed around the inside of the Lang Lodge–each young woman waiting to sign up for her first picks of weekly activities. The water sports were by far the most popular and filled up quickly with the older girls because of their ability to choose first. This left the younger campers to bide their time honing archery skills and braiding bracelets until they could make their way down to the waterfront during the afternoon free swim period. I for some reason, possibly because I always seemed older than my age, wedged my way into a line of older girls and managed to fill the last available spot in the kayaking class. When the other girls in my cabin questioned in amazement at how I could have possibly weaseled my way into the highly-desired class, I credited my bony elbows that allowed me scrap my way to the front of the line.

The next day I practically tumbled down the waterfront steps in excitement for my first kayaking class. I was greeted by sneers from several of the older girls in the class who did not attempt to hide their disgust that a “little cabin girl” had gotten into the class when a few of their friends had not been successful in snagging a spot themselves. I maintained the huge grin on my face. Nothing was going to get me down. I was in the kayaking class. Kayaking!

We were paired off to help one another transport the colorful kayaks off their wooden stands and into the shallows of the water. As one of the tallest girls, even at age 12, I didn’t have to fight for one of the new paddles. I was handed the tallest one and it shone in the sun as if it had just been unwrapped from its packaging. It wasn’t until I was sitting in my kayak, paddle in hand, that I realized because of my anticipation, I failed to absorb any of the instructions the teacher had given us. I was floating in several feet of water and had no idea what the hell I was doing.

I pushed my paddle into the mucky sand at the bottom of the lake to push off out into the water, attempting to avoid the cluster of confused campers bumping into one another’s kayaks in the shallows. As I distanced myself from the group, it took approximately three strokes to get accustomed to the weight of the paddle and the strength required from each of my arms to put my small kayak in motion. After that, I sailed.

It may have been that because of my immense wingspan that the strokes of my paddle were longer and allowed me to quickly pass by others in the water. Or it may have been that I was quick. Regardless, kayaking was the first non-team sport I felt I was a natural at. I was never a big runner growing up nor did I enjoy biking as much as most of my family members, but this sport was all mine.

I had been on the water frequently growing up, the majority of it spent at my family’s cottage where we had several boats. But this was something else. I wasn’t in a motorized boat and the serenity of being so close to the water on a calm day made kayaking wholly different.

The goal was to reach the other side of the lake where a malt shop was perched on the top of a hill. When I reached the shore, I pulled my kayak across the graveled sand and climbed halfway up the grassy hill. Once I sat down, I shielded the blazing sun from my eyes so I could get a good look at the water, and that was when I noticed every other kayaker had only made it halfway across the lake. I’m not a harshly competitive person, but knowing I was first gave me a feeling of accomplishment I had never felt before.

Since that day, I can say my kayaking skills and intensity of trips have greatly increased, but it was that first day at summer camp that put everything in motion. Most of my current trips span several days and over the years kayak camping has become one of my favorite outdoor sports. It’s important to keep in mind that your entire packing list may be more challenging to fit in a kayak compared to what you can carry in a backpack, namely because of the shape of the kayak. Check out my gear list of the most efficient way to pack when kayak camping to help prepare for your first or next trip.