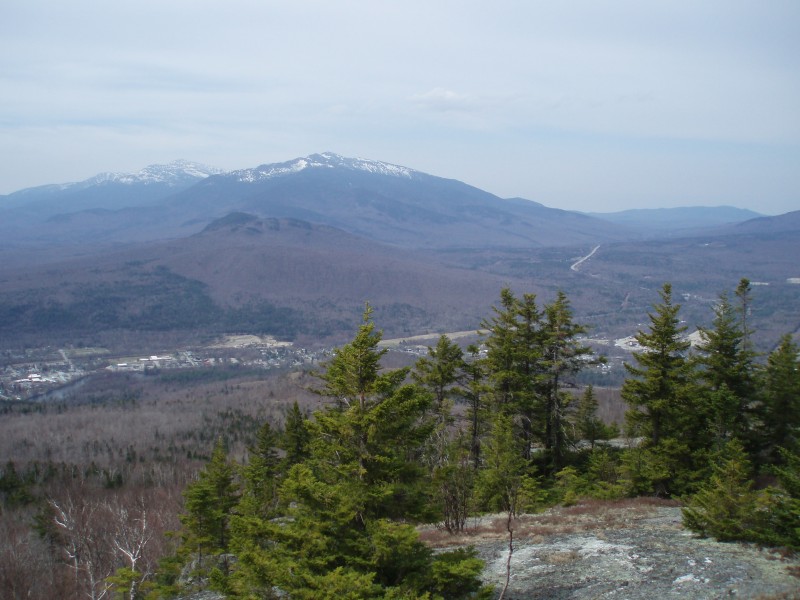 Mount Hayes is a fine vantage point to see the Androscoggin River Valley and northern Presidentials.

We returned to the woods with pep in our steps and were rewarded with the rush of chilled spring run-off cascading down the mountain, the distant drumming of ruffed grouse and a stellar horizon dominated by New Hampshire’s northern Presidentials.

There was a rambling woods walk, a side-trip to a picturesque pond and a welcoming hemlock grove oozing enchantment.

But there were also the cries of rusty hikers as dormant muscles reawakened, plenty of muddy ooze, tricky footing under yesteryear’s foliage, and even pesky monorails of snow trying to make us slip and slide.

The destination was an under-the-radar mountain in Gorham—Mount Hayes. The low-lying 2,555-foot peak is a tad deceiving for its size. Looking like just a plain ol’ little guy readily seen from Route 2 standing above the flowing Androscoggin, it is the outstanding ledges on the summit’s southwest side that serve up a heaping dose of North Country eye candy.

Largely following the Mahoosuc Trail, sections of the pathway are often muddy and slick, frequently in conjunction with a handful of steepness.

Something of a moderate in-town local hike, Hayes is a grand platform for a bird’s-eye view of the Androscoggin River Valley. Maybe it’s got an attitude as it’s the smallest of the blocky southern Mahoosuc Range with neighbors Cascade Mountain and the Bald Caps.

The initial few steps of the seven-mile out-and-back trek are memorable both for crossing the swift Androscoggin on the old steel Boston and Maine trestle and for having to duck twice to enter and exit the bridge.

Though there are signs to follow saying AMC Trail (and very small blue Mahoosuc trail detour signs), the best advice is to stick to the directions on page 531 of the White Mountain Guide (29th Edition) as the way winds through a bag of landowners in ATV country along dirt roads, the Presidential Rail Trail, and by a canal while crossing yet another bridge by a scenic dam.

Mascot Pond serves up both scenery and history.

After a most pleasant first mile, a sign for the Mahoosuc Trail and Mount Hayes appears as the jaunt along Hogan Road becomes a hike, climbing steadily across power lines and eventually following a charming brook. We opted to make the short walk to Mascot Pond on the return, saving our energy for the climb as the temperature rose to the 60s under high clouds.

With several small brook crossings to check our nimbleness, we didn’t realize how welcome the dry ground was until we zig-zagged along the muck, seeing plenty of moose droppings and prints. When things dried out, I scared a sun-bathing garter snake (and another on the way down unless it was the same one) and we rested a spell on a rock by gurgling Pepsy Spring before the final leg up through the sneaky snow to the ledges.

The northern Presidentials dominated the sky with pockets of snow still visible, the Carter-Moriahs in the foreground. The melting ski trails of Wildcat were ready spotted as was town below and the hill over to Randolph. A fine spot for PB&J, we stretched out and enjoyed the spring sunshine before making our way down, this time employing a bit more creativity on the side of the path to avoid the wet sections.

Side trips aren’t something my hiking honey Jan and I often do, but Mascot Pond on the south side of Hayes was only two-tenths of a mile away and we were feeling good.

What a strange and wonderful place. With a wondrous alpine backdrop, there’s a soothing quality to it, but also an unusual sandy and lumpy beach. All one has to do is turn around to see why. High up from the peaceful pond (though used campfire rings and tossed bottles indicate it may not be tranquil all the time) is Leadmine Ledge. The area was the site of the Mascot lead mine, which was operational in the late 1800s. The gated mine is above the pond. But know this, it’s something of a winter bat hotel. In a multi-organization effort including New Hampshire Fish and Game, the installation of “batgates” was finished in the fall of 2006 giving the bats some protection during the cold months.

Nothing like another surprise from a small mountain with big attributes.