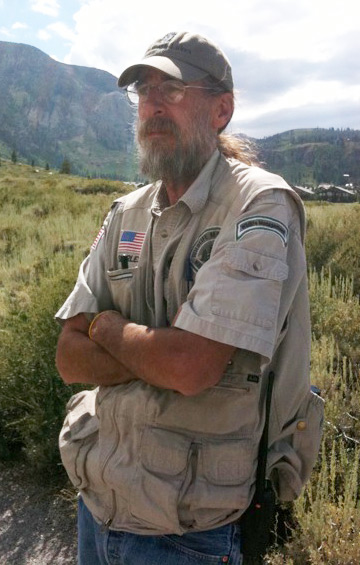 Steve Searles is the "Bear Whisperer."

Are there black bears in Mammoth Lakes, California?

“I don’t want to alarm you, but there is a bear within 600 feet of us right now,” said Mammoth’s lanky wildlife specialist Steve Searles.

Better known through Animal Planet’s The Bear Whisperer programs, Searles is the man responsible for making sure bears and people coexist in the ski town east of Yosemite National Park’s Tioga Pass entrance and surrounded by the Inyo National Forest.

He doesn’t believe in killing the bears. He uses bullets, but they’re rubber. He talks to the bears, yelling “bad bear” but also speaks their language of blowing, chomping, and clacking teeth.

“I can call cubs out of the tree and put them up into a tree,” said the straight-shooting self-taught bear expert. “I use their words and my words. If they don’t understand, the shotgun comes out and we get it figured out.”

Searles is a local character, working with the town since 1996. A hunter and outdoorsman, he kind of lucked into the job that sees him patrolling the area from 10 a.m. to 10 p.m. (often seven days a week), educating the public, and using unusual methods of bear management from firecrackers to air horns.

With bears on the move after winter’s slumber, they’re easy to find from walking through the village to taking a dip in a golf course pond. Searles says the bears have been in their dens for about five months and haven’t urinated, hydrated, eaten, or defecated.

When they wake up, they still sleep 20 hours a day but forage for grasses and dandelions for about six weeks before getting into summer’s feeding frenzy of more grass, tubers, and roots.

Plus pizza and hamburgers. That’s the problem.

“If you don’t feed them, you don’t have issues,” he said. “If you feed them they will be back for more.”

Being a tourist town, a black bear siting draws camera-toting curiosity seekers. Searles does have some unusual advice—”Enjoy it and thank your god. Kiss your kids.”

He also advises the public to not approach the animal, instead watching the bear from afar through binoculars or a camera’s zoom lens. Give the bear room in case it wants to escape. If a bear approaches while you’re having a picnic or are around the campfire, hold your ground by making yourself appear bigger by holding your hands above your head and make some noise.

Of course, keep sites clean and if you’re a vacation home owner, don’t put out bird feeders (try a birdbath instead).”Bears are not nocturnal by nature,” says Searles. “But we ask our bears to work the nights instead of the days.”

Searles clearly involves locals and visitors in his approach to living with wildlife including coyote, raccoons, and cougars. Traffic signs remind everyone that speed kills wildlife. He hands out stickers reading “Don’t feed our bears.”

A Mammoth Lake bear gets into a campsite.

In Mammoth, locals feel a sense of ownership and responsibility about the bears. Residents lock down their trash. They keep food away from the bears.

“If people feed them, the bears lose their respect for us,” he says.

As for dogs, Searles says keep pets on a leash.

“All dogs bark at bears,” he says. “All bears move away from barking dogs.”

Clearly Searles is a man loving his job. Bears have taught him respect. He says they’re extremely intelligent and learn quickly.

But they also die. He doesn’t name them until after they’re at least two because more than half don’t make it. He doesn’t give them traditional names, instead tagging them by personality and physical attribute.

The oldest bear in town is 17.

“So by keeping our bears alive, they get older and smarter,” he says. “All dumb bears die early.”

Searles has become a black bear advocate. He says no one has been killed in the state of California by a bear but says they continue to be shot not by what they do but what they may do. He says the bears live a private life and have a vocabulary of between 20 and 30 words, understanding simple commands like get down, stay, and get back.

And as for his nickname, the Bear Whisperer?