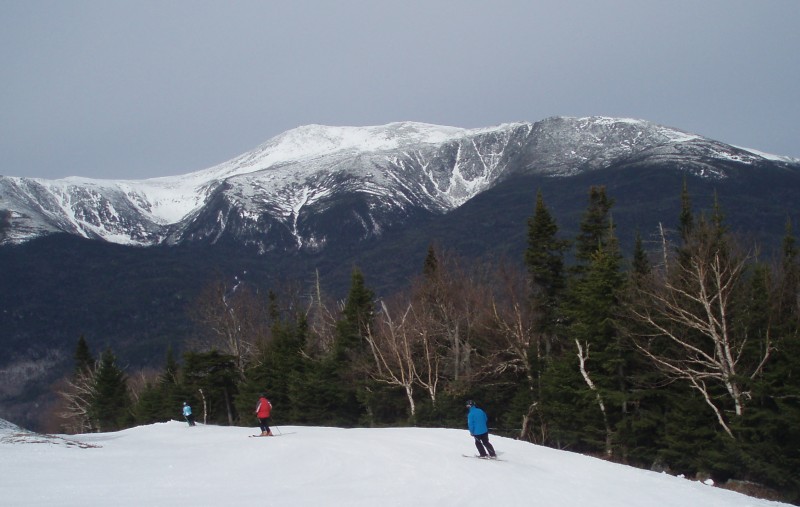 Wildcat in Pinkham Notch, N.H. could be the last ski area open in the Granite State for the sixth consecutive season.

There was a ski season season not too long ago that started the day before Halloween for me and hundreds of others when a late October dump got the lifts running.

That same season ended for me at the same mountain the day after tax deadline day in mid-April.

Wildcat is also a mountain where I’ve been able to make the transition from winter to spring. One spring we brought the tent and were able to camp in the nearby Dolly Copp campground after a day of skiing, start a campfire and have first tracks the next day.

If there is a ski area that symbolizes New Hampshire, it is Wildcat in the White Mountain National Forest. Rugged, individualistic, stormy, and true, Wildcat is an acquired taste for the masses and a smooth smokey single malt sip for believers.

It is a skier’s mountain with a loyal following who live to soar down Lynx, let the knees knock on Lift Lion’s bumps, and can find Mountain Jag Glade without a map. It’s a mountain with long, classic trails on its 2,112-foot vertical that may very well have the smallest terrain park in the state with just two rails and one box on a small cordoned-off section underneath the Bobcat Triple.

Truth be told, I’m usually not drawn to the Cat in the deep cold heart of winter, when Pinkham Notch temperatures dip below zero and winds roar like a lion. There are exceptions when the the notch gets hammered by snow like it did a few times this season.

That’s Wildcat in the spring.

Wildcat’s location makes it a Granite State icon, set smack in a mountain pass with stunning views across to Mount Washington and another spring mecca—Tuckerman Ravine.

But no-frills Wildcat is also a 4,000-foot mountain and even in spring there is some morning chatter that comes from skiing on an encrusted primary machine-groomed surface that hasn’t been moved to soften by the sun yet.

When the sun works it warming fingers this time of year the mountain—and probably the skiers too—seems to relax. Bumps get bashed and even non-mogul loving skiers can manage to make it down a few pitches like Tomcat Schuss with a crooked smile when the mounds are melting.

Wildcat winds. The Wildcat, Polecat, Lynx, and even beginner bad boy Wild Kitten trails all meander in the New England old-school tradition and serve up those heady panoramas. Summit cruising is an art with nearly three-mile long Polecat and scintillating Catapult.

The mountain’s mid-section is slim and trim too. That’s the beauty of Wildcat. It’s almost impossible not to the ride the summit lift and at least once in your Wildcat experience trace a trail with your finger in the air and try to figure out how to get there. Hainsville Pass, Cougar, and Alleycat are just some of those blue square wonders found in the mountain’s middle. The Bobcat Triple is the slow entryway, providing access to many trails you can see—Bobcat and Cheetah—and some that are hidden like Alleycat. A pair of long, narrow swaths—Cat Track and Cat Walk—are gateways to many less traveled trails.

Many New England ski areas have already called it a season. But Wildcat is hoping to be last man standing in New Hampshire for the sixth straight season.