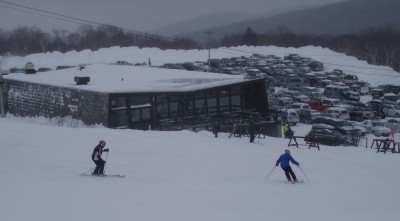 Jay Peak's Stateside lodge, built in 1962, is slated to come down April 6 to make room for a new hotel a the northern Vermont resort.

The snow kept falling on winter’s last day. Six inches of fresh powder waited for our skis to glide through as we eased into the wow in the pow gently and silently, save for our spurts of joyous cries in the woods of Bushwacker.

The draw of the 60-person tram was strong and we answered the call with other powder junkies from both sides of the border, speaking English or French to one another or someone on their phone.

There the wind made its stand at the nearly 4,000-foot Jay Peak summit in northern Vermont, a curler’s stone throw from the Quebec border. The strong wind held us as we started to traverse Vermonter, instead opting out of the punishment for the back-side and Northway only to be met with a jumble of snow conditions from firm boilerplate and swirling piles of drifts on Ullr’s Dream.

And that was the Jay way on winter’s last day, each lift a micro-environment of wind, conditions, and snowfall.

Next month another phase begins with the demolition of the weathered Stateside lodge to be replaced by an 84-room hotel, part of a $170 million project that also includes 22 trails and three lifts for the oft-dreamed West Bowl, and a medical center.

According to communications man J.J. Toland , the beginnings of the Stateside Hotel starts April 6 with the 1962-built lodge coming down during the Chalet Shakedown with its festive atmosphere.

Skiers must wait until at least 2017 for the rope to be dropped on West Bowl. The grunt work’s been done with several rounds of permitting proposals and scouting. In the end of the herculean task, plans call for another hotel, lodges, and a transfer lift from the existing area.

Given Stateside’s impending metamorphosis we thought it best to say good-bye, warming up in the dead man walking lodge after darting into and out of the woods on trails like Goat Run and Milk Run.

Good-byes are best kept short and by mid-afternoon some 10 inches had fallen, our thighs protesting. So we opted for an early après ski, dipping our toes in the family-friendly Pump House. The rousing slides, engaging River Run, soothing hot tub, and even shooting hoops turned après ski into a big wet après-scream. Finally, skiing and a terrain park, albeit wet, we could handle.

We slept well and welcomed spring’s arrival by skiing the 18 inches that had fallen in 24 hours. No bluebird day for the vernal equinox; a gray day at Jay with more wind wallops and snow.

It was such a day that showcased the passion and loyalty that brings the skiing and riding powder junkies to isolated Jay. Though they say there are no friends on a powder day, there were friends of Jay waiting for first tracks and then making a beeline to their favorite lines in the woods. Spontaneous cries of joy pierced the mountain from all directions. Lift line runs were more incredible as there were those with sublime dexterity and those who wish they had, sometimes spilling into yard sales.

That’s the soul of Jay found in the trees and on the trails–not in a boutique hotel.

At times, the wind blew so hard it held us up and almost pushed us back. The tram was on wind hold. The Green Mountain Flyer swayed side to side, visibility so poor we couldn’t see the chair ahead. The higher we rose on the Bonnie quad, the less we saw, but the more we heard, and joined in. When we floated, sometimes through nearly knee-deep powder, we rejoiced. But when that same powder became overwhelming, and stopped me in my tracks, I just shook my head at the intensity of Mother Nature and what she brings.

At Jay, it’s always about the goods in the woods.