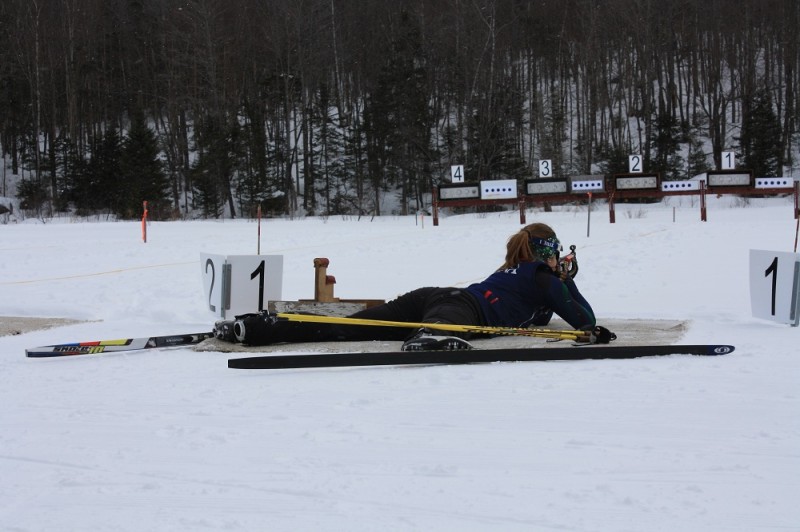 Mikaela Paluszek takes a shot at the Jackson Biathlon Range.

Mikaela Paluszek enters the frosty field on the edge of the woods under the mountain and stops.

She takes the .22-caliber bolt action rifle from her back dropping to her knees eventually laying on her stomach in a y-position on a carpet covering the snow, skis still on her feet.

Heart racing, the 2012 U.S. Junior World Championship team member pulls the trigger and pop, pop, pop cuts through the breeze and echoes off the hills.

Instantly, she knows whether she’s hit her mark 50 meters away as the mechanical metal target changes color when the shot is good.

Biathlon isn’t America’s sport but the combination of cross-country skiing and shooting is enjoying a grassroots surge at New Hampshire’s Jackson Biathlon Range.

In partnership with the renowned Jackson Ski Touring Foundation and its 150-kilometer network in the heart of the White Mountains, the non-profit organization offers biathletes a place to train while also introducing neophytes to the pursuit.

The well-signed range has four shooting points (lanes), a penalty loop for marksmen to ski when they miss a shot, and a range house built last spring for changing and viewing.

Wayne Peterson runs the range. A seminal outdoorsman whose working accomplishments include driving a snow tractor for the Mount Washington Observatory up the auto road to the Northeast’s highest peak and plunging into a ski area snowmaking pond as a commercial hardhat diver, he discovered Nordic skiing as an adult and was drawn to biathlon where he competes in the masters category. Some five years ago he opened the range as a place to practice and also introduce others to the sport. Two years ago the non-profit was formed and now some 25 members of the Jackson Biathlon Club also have access to practice with a couple of regulation biathlon rifles and lesser grade models.

For biathletes the range cuts travel time to locations like far-northern Fort Kent, Maine (eight hours) and Jericho, Vermont (three hours) in the southern third of the Green Mountain State.

It also lets local students in on the sport. A dedicated core of seventh and eighth graders are regulars, as well as some high school skiers. There are also some hardcore adults taking to the scene.

Boosting local interest is the success of one of its own. In January, a 17-year-old Conway high school student named Sean Doherty became an unlikely biathlete hero by becoming the first American to win three individual medals in a single world championship. The teen won a gold and two silver medals in January’s IBU World Junior Championships in Austria. Peterson actively seeks to promote the sport. He’ll even do two-hour demonstrations to small groups of prospective biathletes going over biathlon basics and safety.Safety is paramount. Wayne’s word rules.

“My goal is not to throw people into the deep end but to take the time to slowly explain the sport so they learn the basics from the beginning,” he said during a weekend open house.

There is strict range protocol. If the rifle is not on your back, the bolt must be open. Shoot only at designated targets.

“This is the best structure to learn about firearm safety,” he said. “This teaches you respect for firearms. If you don’t listen, out you go.”

Biathletes shoot with their heart rates up. Not only do skiers use the range, so have snowshoers. Peterson welcomes runners and mountain bikers in the non-snow months.

Though TV viewers—interest also spikes during Olympics—may be familiar with those metal targets, the paper targets are valuable tools as a coach and athlete can see the patterns and make adjustments though results are also seen peering through a range scope.

Skiers shoot prone (on their stomachs) or off-hand (standing).

Peterson stresses the range is open to anyone who wants to try it and for other disciplines like snowshoeing, running, and biking.

As Peterson says, “This is not an easy sport. This is not snowboarding.”