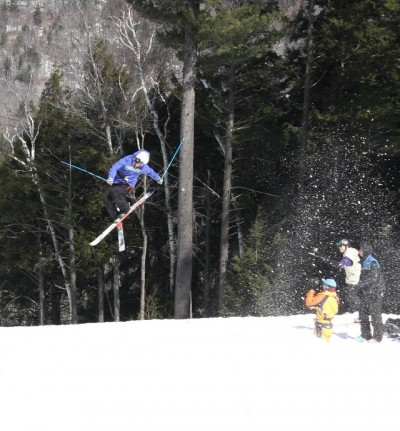 There were also spread eagles, twisters, corks, and grabs.

Thrills met spills as contestants including recreational participants, old schoolers in bright and funky 80s garb, Attitash freestyle program skiers, and even a father and son took two judged runs over a choice of small 10-foot or large 30-foot kickers to strut their freestyle stuff.

“This is bringing it back to history,” said event coordinator Corey Madden. “We didn’t have jumps back in the day. We had moguls and pulled stuff in there like twisters, spread eagles, and daffies.”

Patriarch of the day was Bob Wright, 46, a former Attitash freestyle coach entering the fray with his 11-year-old event rookie son Robbie who skis about 30 days a season. A coach for 12 years, Wright and his son ski in the parks and through the bumps.

“I wanted him to like skiing,” said Wright, whose ski heros include Glenn Plake, Nelson Carmichael, and Jonny Mosely, “but I wasn’t planning on doing this. But I’m doing it if this is what it takes.”

Lingo is a learning experience when watching the generations. A daffy is a trick where an airborne skier extends one leg forward and the other back with hands out to the side or overhead making the skier look like a duck. A spread eagle is when a skier takes to the air and extends both legs and arms outward.

Then there was Wright’s challenge.

“I’ll try a rocking horse, an old school backscratcher where you bring the skis up and grab them in the front,” he said. “And maybe I’ll throw in a little spread.”

And then there were the corks, those corkscrew-like off-axis spins with skiers and riders rotating up to two-and-a-half times during the contest in a 900.

“These kids are doing tricks we never thought of back in the day,” Wright said. “They have a totally different bag of tricks.”

Putting some on display were kids in the Attitash Freestyle program, kids aged 9-14 who spend the winter learning jumps, spins, and tricks.

Coach Frank Hennigan says they’re taught basic skills so they can compete at a higher level further down the road.

“We start them with basic going straight off the jump, take off and landing,” he said. “Then we work our way up to off-axis maneuvers up until 1080 degrees.” So at an event like the Big Air, it’s fun, but it’s also a chance to perfect their skills.

“They’re definitely trying things they’re working on,” he said. “One kid is trying a misty 900 that he hasn’t landed all year.”

On the fun side, Brenden Smith, 28 of South Boston, was decked in a loud purple one-piece suit. An Attitash skier since age five, he’s an all-around skier comfortable in races, bumps, and air.

“This has been around the block,” he said about the suit. “It’s been in the family for years and passed down. One of those deals that once you get it, you can’t get rid of it.” He did something with a back flip that looked incredible.

Snowboarding John Fudala, 31, of Concord was looking to land a cork 5 or a cork 7.

“I’m an old dude,” he quipped. “Some of these little guys are really twisting it up here.”

Fudala, a recreational snowboarder who likes to ride with friends, said he does contests here and there.

“It’s a way to keep motivated and stay on my toes,” he said.

Well, unless he’s spinning through the air.