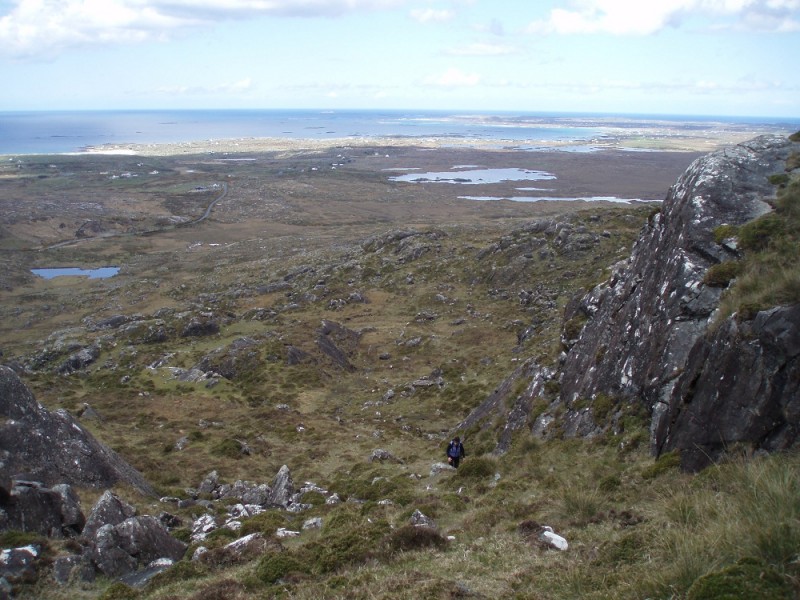 We followed their progress from below, hoping they could answer one simple question and put an end to our confusion as the path we followed—and had turned around from—went down and not up under Ireland’s Errisbeg Mountain.

Too soon in spring for wildflowers but not for tall wet grass and rugged sheep dotted in dye, the clan finally came within asking distance.

“Excuse me,” I said to the eldest of the bunch. “But where is the trail?”

Looking at my hiking honey Jan Duprey and I as if we were from another planet, the grand patriarch fielded the query while smiles crossed the faces of his descendants.

“You see that rock up there?” he asked with a hardy Irish lilt.

I spotted several. But went along for the ride.

“Stay to the left,” he answered. “You should be all right.”

“You’ll reach the top after that,” he said.

We thanked them for their advice which in essence was “pick your own path.” They went down and we went up, eventually reaching the top of the nearly 1,000-foot hill just west of the fishing village of Roundstone in County Galway. From the top, we saw the spectacular Irish coast and Dog’s Bay in the Atlantic, with its whale’s tail-shaped land. In the northeast stood the stocky Twelve Bens, in the north was the Roundstone Bog.

Ireland is ripe with walking and hiking trails. There are more than 150 well-marked national looped walks with excursion lengths ranging from an hour to a day. From dirt roads to thin trails, the assortment makes for a fine way to spend a holiday.

But there are places to leave the trail signs and go where the locals go. Such is Errisbeg Mountain. The mountain is a well-trodden walk and readily done in a few hours. However, all we had were directions which basically went something like this: head out of town and at the bend in the road park by the gate. Go through the gate and follow the path.

Roundstone is a pleasant fishing village in the windswept Connemara region of Ireland, founded in the 1820s and now populated by working fishermen and artists, both natural draws for the tourist set. With narrow streets, the harbor is set against the mountains.

So Jan and I drove west out of town in search of that bend in the road. Of course, there were several bends and being a mature and rational couple we couldn’t agree on which one was right. Luckily we were in a land where we spoke the language and decided to actually stop and ask a resident outside her home as she prepared to hop on her motorcycle.

Since males don’t ask for directions, Jan left the car and came back beaming.

That meant she was right and we returned to the bend she had deemed the right one.

We passed through the gate and followed the dirt road through the green and brown rocky landscape against the cloudy blue sky. The road was easy to follow. We marveled at the Connemara horses that paid us no attention; the same with the sheep, going about their business. The landscape sucked us in; the stroll was easy and we marched steady for about a half hour. But Jan was perplexed.

A sheep pauses on a rocky outcrop.

“When are we going to go up?” she wondered.

Being an eternally optimistic male, I countered with “soon.”

Well, soon enough the road petered out to what looked like choices of jeep tracks and, sadly, we had to do an about face and admit defeat on this one.

As we came within sight of the road again, we spotted the family who set us on our merry way up the mountain. We picked our way along the well-travelled sheep tracks up the hill that seemed terraced, making sure we stayed to the left of the rock, but it was a bit tough to tell since, well, the rocks kind of looked the same.

Yet we finally made it to the flat, boggy top and wondered at the incredible vista.

The beauty of the hike was reminiscing about it in the warmth of the pub later on during a pint of Smithwick’s and a filling chicken and mushroom pie and chips in O’Dowds. Locals told us about it and we found it easily.