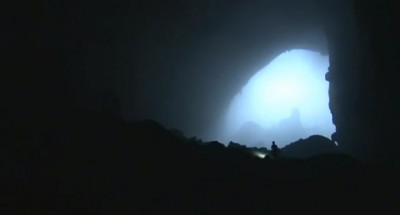 Discovered only in 1991 by a passerby, the cave Hang Son Doong in Quang Binh Province in Vietnam was not revealed to the public until 2009 when a group of British scientists with the British Cave Research Association attempted to determine its actual size. The expedition made it as far as a large calcite wall approximately 5.6 miles into the cave, unable to traverse farther. Although a source of light beyond the wall begs for further study of the cave. The biggest chamber alone measures 3.1 miles long, 656 feet tall and 492 feet wide, making it the largest chamber ever found in a cave.

As a writer for National Geographic, Mark Jenkins first visited the cave in the beginning of 2011 in the company of one of the first British scientists to explore Hang Son Doong back in the spring of 2009. Jenkins described the journey to the end of the cave as one that makes you feel more like you are in space than in a cave underground.

The trail disappears before me into a difficult pile of breakdown—building-size blocks of stone that have fallen from the ceiling and crashed onto the cave floor. I crane my head back, but the immensity of the cave douses my headlamp’s tiny light, as if I were staring up into a starless night sky. I’ve been told I’m inside a space large enough to park a 747, but I have no way to know; the darkness is like a sleeping bag pulled over my head.

…But then, as my pupils adjust, I’m surprised to make out a faint, ghostly light ahead. I pick my way through the rubble, almost running from excite­ment, rocks scattering beneath my feet and echoing in the invisible chamber.

…An enormous shaft of sunlight plunges into the cave like a waterfall. The hole in the ceiling through which the light cascades is unbelievably large, at least 300 feet across. The light, penetrating deep into the cave, reveals for the first time the mind-blowing proportions of Hang Son Doong. The passage is perhaps 300 feet wide, the ceiling nearly 800 feet tall: room enough for an entire New York City block of 40-story buildings.

Below is the full-length documentary of the cave produced by National Geographic either for you to marvel at, or to begin planning your next caving adventure there when Hang Son Doong finally opens to tourists.

Image screenshot of video by hai kaka on youtube