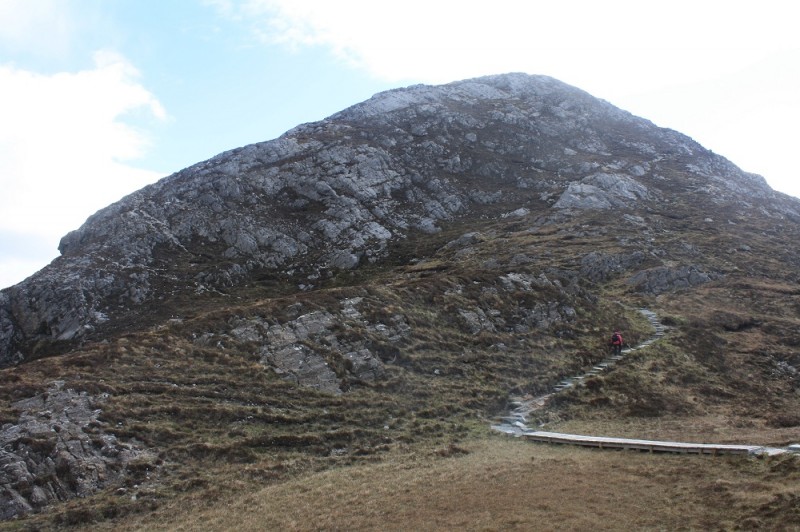 Diamond Hill in Ireland's Connemara National Park may be small, but it's got big views of County Galway and beyond.

They call it a hill but there must be something that doesn’t translate well from the English spoken in Ireland to the language spoken here in the States.

Because Diamond Hill is a mountain, a small one, but a bona fide one.

The 1,460-foot craggy dome is something of a people’s peak as its color-coded trails are located smack outside the visitor center in County Galway’s Connemara National Park in western Ireland.

The park is a draw in the tiny village of Letterfrack, also home to the resplendent Kylemore Abby sitting on the shores of Kylemore Lough and a handful of pubs—Molly’s and the Bard’s Den—that taught us a wee bit about what the Irish call “good craic,” meaning a good time.

But perhaps the best find in Letterfrack, outside the national park, was the bed and breakfast Kylemore House. I booked it online for three days, and when my hiking honey Jan Duprey and I walked into the 1785-built regal styled Georgian house across from a tiny lake surrounded by stark mountains we knew we had to stay longer.

Even before being shown our room, we asked if we could add two additional nights.

The Kylemore was our comfortable base camp for exploring the region, including the park, the abby, the fjord of Killary Harbour, the seaside village of Clifden, nearby Croagh Patrick mountain, local rambles, and driving the wild 50-mile Connemara Loop.

Fueled by the famed Irish breakfast of eggs, tomatoes, bacon, sausage, bread, and potatoes, we would take two meals a day, quite enough to get us over the hills and far away.

Connemara National Park is one of six national parks in Ireland with free admission, a welcome respite from the land of $10-a-gallon gasoline and $6-$7 pints.

The park is a 5,000-acre land of enchantment with noted lakes, mountains, and boglands including four of the Twelve Bens, a mountain range that dominates the region’s landscape.

But for most park visitors, the closest they come to the Bens is from the top of quartzite Diamond Hill along an amazing rocky spine.

On another nippy April gray sky day, Jan and I decided to make the approximately four-mile loop armed with information from a friendly park employee and the free leaflet.

Easy to follow with plenty of signs, boardwalks, and well-draining rock steps, the way led through scrub and bog before we noticed the stunning views to Ballynakill Harbor and Barnaderg Bay with islands out in the cold sea. There was the dome-shaped Tully Mountain and a look over at the abby and its lake, and the B&B and its lake too.

From the summit, the park’s wild and remote scenery beckons.

But the best was the view at the top where we came upon fellow summiteers, a German couple, who easily agreed to take the standard tourist shot at the top. From the summit, the wild and remote landscape was a muted brown loaded with folding ridges and stoney peaks. Though not even 1,500 feet high, it was an excellent vantage point into the drama of Ireland’s low but impressive mountains.

On the way down the winding path, we came upon late morning starting hikers from various countries—Canada, the U.S., France. In various stages of fitness and footwear, we urged them to continue to the top, taking time to rest and not rush.

We didn’t rush either. Though the park’s red deer proved elusive, the energetic Connemara ponies were not. We watched as they ran, and took to small trees in search of something to eat.

Back at the start, I looked up again at that small mountain, a gallant stage to witness an inspiring show.