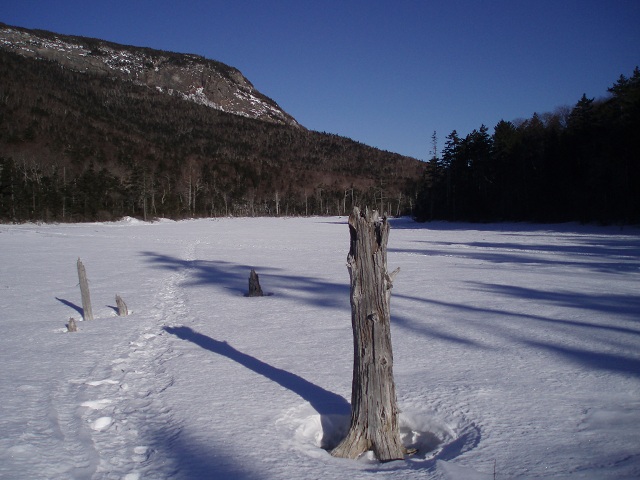 The Greeley Ponds in the White Mountains of New Hampshire are a fine place to linger.

They are two steep rocky profiles holding court above the wintry, frozen shores.

Mount Osceola’s East Peak, clocking in at 4,156 feet with its rugged face, pines, and firs stands proudly in the west, its upper reached warmed early by the morning sun. To the east is rugged Mount Kancamagus, looking colder, more foreboding with its stocky 3,728-foot summit.

The two are found in the glacial split that is Mad River Notch in the White Mountain National Forest, sandwiched between Waterville Valley and the winding Kancamagus Highway in northern New Hampshire.

Serious hikers venture in there to scale East Peak, the 34th highest of the states 48 four thousand footers. Though hikers might not be able to look down upon the ponds from the summit, they can see the dazzling jewels on the approach along the north ridge.

But other hikers looking for a seriously delightful and virtually effortless romp will travel in there to walk along the shores of the Greeley Ponds no matter the season.

About nine miles east of Lincoln, the well-used yellow-blazed Greeley Ponds Trail—which continues past the ponds to Livermore Road in Waterville Valley—is the relatively benign pathway to the ponds. The hiking trail is different from the cross-country trail of the same name, and they leave from different parking areas and do eventually connect near the ponds.

Winter is prime time for this often muddied way loaded with rocks, roots and rivulets plus a few narrow wooden planks. But the beauty of travel in winter is that those hurdles are covered in snow and usually easily navigated on a popular thoroughfare that is 4.4 miles round-trip. Who needs to climb a mountain to enjoy hiking when ponds are in themselves wondrous alpine jewels too.

The trail is a jaunt through the hardwoods, fir and spruce, the East Peak’s wall frequently sighted to the west through the season’s naked branches. Easy-going travelers may share the way with those going to the four-thousand footer, paths going separate ways at about 1.3 miles into the journey at a signed junction.

About a third of mile later, the first pond is reached—the smaller Upper Greeley Pond. Measuring some two acres, there are tracks on the pond where others have ventured over the frozen waters while the path goes up like a narrow monorail to the west. The pond offers those first glimpses up to the wooded Mount Kancamagus and its rocky walls. The more one ventures onto the frozen water the more one sees Osceola as well. Many branches and rocks poke through the surface, giving the pond a desert like feel. At one time a shelter sat near its southeast corner, but no more. The area became overused and out it went.

That cross-country ski trail and hiking trail are more intertwined on the short leg to Lower Greeley Pond, finer than its nearby sibling. The shallow three-acre pond shares a similar landscape of skeletal trunks and branches serves up a more complete mountain gap view.

The hard ice and windswept snow invited on-pond exploration away from the trail that rank along its side. Brown trees, blue sky, white snow and the many colors of ice made the sunny shores a welcome spot for a bit of a breakfast break, coffee still warm from the small thermos thankfully masking the taste of the tasteless cereal bar that had grown cold. It was a perfect spot to listen to the wind blow throw the trees and hidden squirrels or chipmunks do their things while leaving tracks in the snow.

All too often while hiking much is focused on the completion of the task. Lingering doesn’t happen as much as it should. Greeley Ponds are places to take in the sun and enjoy its warmth. They are places to have a second cup of coffee, even if it’s in addition to the two consumed at home and on the way to the trailhead. Have a second stale cereal bar.

On the return, go slowly across the pond and examine the wrinkles in the deadwood. See the wind carvings in the snow. Don’t rush and be sure to stop at the other pond too. Maybe have some sliced apple, far better than those bars. Let the sun work the freckles.

Take in the steep cliffs again. Watch the sun rise in the sky. There’s no hurry to leave the Mad River Notch and its splendid Greeley Ponds.