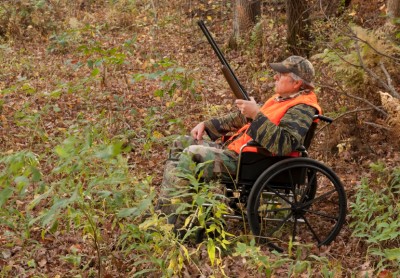 Like a lot of subjects, my views regarding being handicapped and participating in outdoor activities have evolved over the years. Probably the single biggest factor in my awakening to the opportunities in the outdoors for those with handicaps was when I met Arvel Gipson. Old Arv had fallen off a high transmission line and broken his back, which left him using crutches for the rest of his life.

Arvel refused to let his handicap stop his enjoyment of the outdoors. We camped, fished, hunted, and cut firewood together. Arvel would drag his chainsaw into the forest and cut firewood right alongside me. When he shot his deer, he tied a rope on it and dragged it out of the woods with his crutches. I recall him observing that when he was trolling for trout or bass out on the reservoir, he was the equal of every other angler on the water. He knew darned well he was handicapped, but he simply refused to let it stop him.

When I was four years old, I managed to crush part of my right hand under the steel grate of a street drain. I crushed three fingers pretty badly and one of them developed gangrene and had to be amputated. The surviving two fingers were disfigured and misshapen and had some permanent nerve damage. To this day, if I get my damaged fingers chilled in the snow, they’ll stay numb for three or four days. Since I didn’t begin school until after the accident, I learned how to hold a pencil and how to write despite my handicap.

Heck, I didn’t even know I was handicapped until I dropped out of college during the height of the Vietnam War. As long as you were enrolled in school and getting passing grades, the draft board gave you a student deferment (if I recall correctly it was a 2-C classification). But if you dropped out of school, you lost your 2-C status and became a 1-A and were ordered to report to your local draft induction center. Because I had some college credits and got pretty good test scores, an Army recruiter offered me a chance to go to Officer Candidate School and become an intelligence officer, if I signed up for a four-year hitch. I agreed and was all excited and looking forward to my Army career.

When I had passed all my standard mental and physical exams the doctor reviewing my case said, “let me look at that hand, boy.” After checking it out pretty thoroughly the doc pronounced, “sorry, boy, but you’re a 4-F and can’t serve in the military.”

I was heartbroken that a couple crushed fingers would keep me out of the service and even appealed to my Congressman. A second review by an orthopedic specialist at Letterman Hospital confirmed my fate–4-F, ineligible for service. Dang! That’s when I found out I was handicapped.

Like most young adults our early 20s, I was pretty sure I was immortal and that I could hike anywhere with no problem. I would backpack into remote streams in search of the rare golden trout or the even more rare Paiute trout. The steep canyons of the Sierra were the home of monster fish and huge deer and bears that were unmolested by ordinary mortals. As years passed however, not only did I slow down a little, but I fished and hunted with fellow outdoor enthusiasts that were handicapped in some fashion. I began to realize that the outdoors was not only a place for the young and physically adept, but that there were ample opportunities afield and a-stream for the old and the physically challenged as well.

Interestingly, age is also a handicap. The older you get the more you slow down. Again, being handicapped, while very real, is hugely affected by your state of mind. I suspect we are all handicapped in some fashion, whether by accident, age, birth, or illness. Heck, even youth is a handicap, they just don’t know it. I developed asthma in my early 30s and suddenly, those 2,000-foot deep canyons weren’t so easy to climb up and down in my quest for pristine fishing. Guess what? I adapted. Instead of trying to climb the canyon walls as I used to, I began to fish the river at the bottom from a white water raft. There are still huge fish, and I get the same thrill when I fight and release one, only now I do it from a raft instead of hiking and wading.