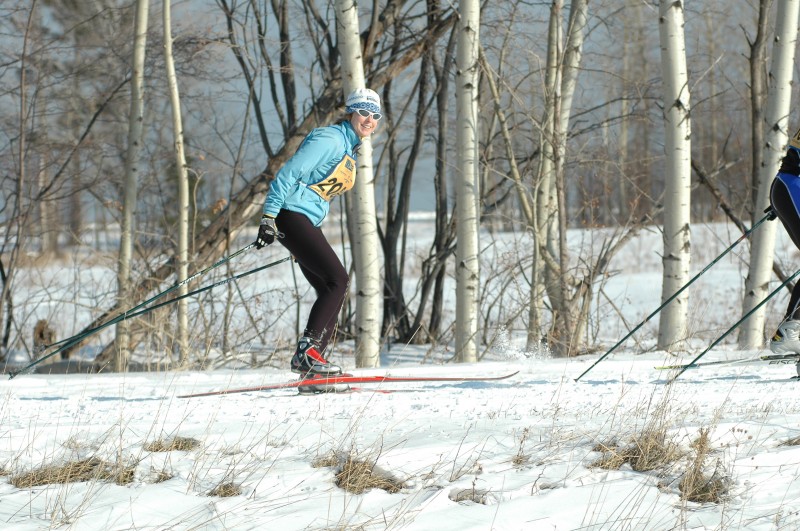 It’s happening. Snow is sticking and the thermometer is parking–at least at night–below freezing. Nothing better than brisk icy air to fire up your physical energy, and it’s also good tonic for your mental mojo too. Just ask Marquette’s Carrie Pearson.

The idea for her latest children’s book came from an exceptionally cold winter day when she was snowshoeing the trails near her home on the south shore of Lake Superior.

“I was walking across a bridge deep in the woods,” explains this snow-loving adventurer, when she noticed a deer watching her. “His head was cocked to the side as if he was trying to figure out what I was. I decided I must look strange to him with my hat, mittens, and layers of clothing.”

She kept the idea swarming in her head until she could get back to her keyboard and thread the encounter into a story. The result, A Warm Winter Tail, centers on adapting and keeping warm in winter, but with a twist.

“This book is from the animals’ perspective, wondering how humans stay warm,” says Pearson, a former early elementary teacher.

The 32-page book makes a perfect holiday gift, and as we move into months of cold weather, the message is fitting whether you are a third grader, or the grandparent of a third grader. Winter survival–and enjoyment–depends on how well you adapt.

No better place on the planet teaches that lesson than the bottom of the earth. In December 2010, I landed at the South Pole, a guest of the National Science Foundation’s writers and artists program. The weather monitor in the galley at the Amundsen-Scott station displayed the temperature and windchill. It was the first time I saw side by side evidence that -40 Celsius matches -40 degrees Fahrenheit.

Even with a wind chill at over 60 below, and nothing alive for nearly a thousand miles, this most desolate place on earth has had an age-old calling to the polar pioneers.

December 14 marks the 101st anniversary of Roald Amundsen’s arrival at the geographic South Pole. Proud to be called “the last of the Vikings” he was the first man to reach true south, planting the flag at 90 degrees for Norway.

From an early age Amundsen was lured to the polar regions and from years of traveling the Arctic Ocean, he learned his survival skills from the best, the Inuit. Copying what they ate, what they wore and how they traveled he was able to out distance and out last his rival, Britain’s Robert Falcon Scott.

Unlike Amundsen, Scott planned to carry the bulk of his supplies by motor sledge and ponies. Leaving Antarctica’s Cape Evans on November 1, 1911, Scott loaded 740 pounds of supplies on two motor sledges but they failed after 50 miles.

Amundsen had other ideas. The 39-year old not only set off earlier–on October 19, 1911–but he chose a more direct route, some 60 miles shorter than Scott’s.

But even more crucial, Amundsen used polar-friendly systems. Rather than heavy wool and canvas, the Norwegians wore Inuit-style fur clothing. They ate seal meat and traveled by ski and dog team. Amundsen never understood the British aversion to using dog power, and to him dogs were not only more efficient but they were edible, too.

When he left base camp with four teammates he had four sledges and 52 dogs. They covered the estimated 930 miles in just 57 days. It took another 42 days to complete the 1,860 nautical mile journey, arriving with all teammates, two sledges and 11 dogs on January 25, 1913.

Scott did arrive at the South Pole but his journey took three weeks longer, a total of 78 days. Finding Amundsen’s flag, tent and note, the Brits knew they had lost the race. Defeated, Scott’s men began the long journey back but plagued by storms and no food they never made it. On March 29, nearly five months after they set out and now freezing and starving, the 43-year-old Scott wrote his final journal entry, “For God’s sake look after our people.” The team of five were only 11 miles from their food and fuel depot.