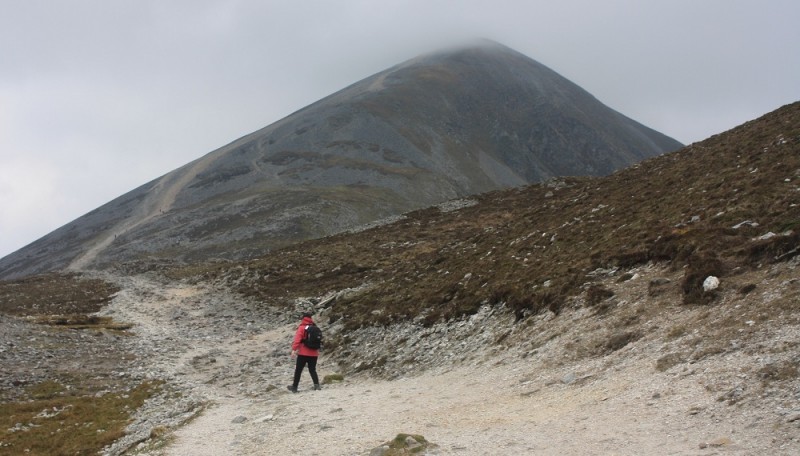 It is Ireland’s most climbed mountain.

Dwarfed in size compared to mountain ranges across America from the Cascades to the Whites, relatively-tiny-but-holy Croagh Patrick in Country Mayo a few miles outside the village of Westport packs quite the punch when horrendous winds scour its treeless cone-shaped top.

But when you’re on vacation, you tend to venture out in weather you probably shouldn’t. Then again, if shoeless pilgrims can do it, how hard could it be?

Hiking the scree-loaded path to the mountain also called The Reek was part of a 13-day trip I took to Ireland in April. The idea was for my sweetheart Jan Duprey and I to see a few pieces of the Emerald Isle in detail as opposed to a whirlwind blur of the island nation. Concentrating on Galway, the Connemara National Park area, the southwest coastal town of Doolin, and Dublin, we rented a manual vehicle to navigate the far-too-narrow winding roadways on the wrong side of the street. Driving the roads leads to a greater understanding of why there are a wealth of pubs in the country. Survive the drive and celebrate with a pint.

Nonetheless, we sought hiking trails, pubs, music, castles, museums, and local dishes while staying in hostels, a B&B, and a Dublin apartment.

And our wanderings led us to the mountain on a raw windswept day when a pint beside the fire wound have suited us just fine.

The mountain is named after St. Patrick. You may be familiar with the tale–legend has it that St. Patrick stood atop Croagh Patrick, rang his bell and all the snakes in the country fled. He also fasted for forty days and nights up there.

With a white stone chapel on the summit, and placards and statues at its base, the rocky peak that towers over the Atlantic’s Clew Bay is also the site of a massive annual pilgrimage. On the last Sunday of July, thousands of people, including many in bare feet, make the climb to the church for prayer, mass, and communion. Along the way, they follow certain rituals, including walking around stone-laden stations. In the past, a torchlight hike added to the spectacle but that practice is no more. However, many pilgrims make the trip beginning in darkness with flashlights.

We made the trek on a day with rolling blinding mist, light rain and fierce winds.

Marty Basch and Jan Duprey pause outside the summit church on Croagh Patrick. Photo by a guy on the mountain

Croagh Patrick’s a popular place. There’s a visitor center complete with cafe, souvenirs and showers. Plus, you have to pay to park. So right there we were under the proverbial gun, having to figure out how long the hike would take.

We figured three hours for the four-mile roundtrip hike.

Bluntly, we were warned by locals in the car park the forecast called for strong winds and chances of rain.

Cast as tourists from far away, we pigheadedly decided to go. I mean if nuns could hike this, how hard could it be?

We certainly weren’t alone during the late morning start, as hikers wore everything from proper boots to sneakers, carrying everything from backpacks to purses and speaking a melange of languages. The broad well-trodden pathway across the road from the Murrisk Abbey and macabre bronze Coffin Ship sculpture commemorating those who died during the Great Famine followed a rushing stream and passed through a fence that needed to be opened, a common part of hiking on the other side of the pond.

We saw plenty of the ubiquitous yellow Gorse shrub, a blazing sun no matter the weather with leaves that produce a feint pineapple scent when rubbed. Sheep, blazed with colorful paint, appeared uninterested in our trek along the initially easy grade up a ridge.

Stopping frequently to turn around for the rich horizon of ocean and farmland, we also couldn’t help noticing the threatening skies and cloud enshrouding the summit. Many peak finishers encouraged us to press on, while others turned back because of the wind.

We were soon slapped around a bit by the punishing gusts when we reached a small forgiving plateau, but as the mist took over the wind picked up in earnest as we started up the nasty scree steps, forcing us to question our choice and wondering if it would be better to experience St. Patrick while at an urban parade drinking a green beer.

On the descent, the cloud and fog lifted on occasion to allow a look at the rich landscape. Photo by Marty Basch

We seemed to go in step for a spell with a Dublin photographer and his friend working on a travel book. They made it to the summit first and we eventually also found a little nook of shelter on the windless side of the closed church. Visibility was awful. I also confided to them I thought my parking ticket would expire before we returned, and I was assured not to worry.

But the wind also blew away the cloud, offering brief but fantastic glimpses of the countryside, coast, and portions of the rugged Twelve Bens—a range of jagged peaks in the west of Ireland we would venture closer to later on. We tend to hike with poles, and didn’t have any with us, making the descent more taxing (at least mentally). Our way down in the high wind was slow. When the wind allowed we stopped to take in the view, only really enjoying it once we returned to the flats and then the easy grade back to the parking area.

And though my parking ticket had indeed expired by a good half hour, there was no fine waiting for us. Just fine memories of being humbled in the presence of something bigger.

First and last images by Marty Basch, second image by a guy on the mountain