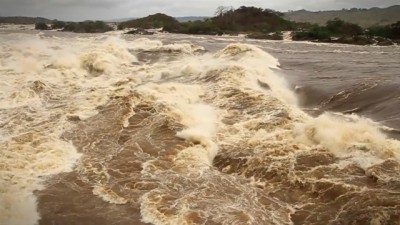 Nothing is every really scary or exhilarating if it doesn’t have the potential to cost you your life, right? Perhaps in some people’s heads, that’s the thought process. Having kayaked some of the most extreme and dangerous waterways, Steve Fisher still wasn’t satisfied and so he set out not only to kayak, but to film, one of the world’s largest rapids on the Congo River, the Inga Rapids.

Congo: The Grand Inga Project is an 81-minute documentary that follows a team of four men brave enough to take on the steep rapids, 30 times larger than the Colorado River’s, during November/December 2011. Available at ingaproject.com, the video below is a condensed, 4-minute trailer of their adventure sponsored by Red Bull.