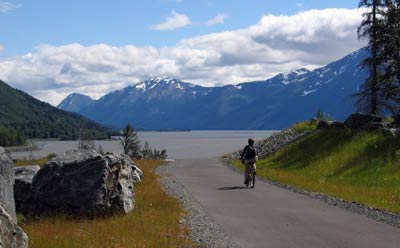 Considerable research shows that fresh air, exercise and contact with nature is good for your health. The question is how to get people outside to do what’s good for them?

The US population is approaching 312 million people, 90% of whom spend an average of 95% of their lives indoors, an increasing amount of that time glued to electronic screens of all sizes and shapes. Little wonder then that one of the biggest national health issues is a lack of physical activity, and little contact with nature. To get people outdoors, you can coax, shame, or try to frighten them, but research has long known that guilt and fear have limited value in health communications.

The best solution: lure people outside to have a good time. To do that, you have to offer them positive experiences. For millions of Americans, that means walking, bicycling, or jogging along greenways and trails in natural areas.

“Trails are places of regeneration and peace,” says Bob Searns, Chairman of the Board of American Trails, one of the nation’s leading outdoor recreation advocacy organizations, and founding partner of The Greenway Team in Denver, Colorado, which designs and builds trails and greenways.

“Founded in 1988, American Trails is the only national, nonprofit organization working on behalf of all trail interests, including hiking, bicycling, mountain biking, horseback riding, water trails, snowshoeing, cross-country skiing, trail motorcycling, ATVs, snowmobiling and four-wheeling,” says Pam Gluck, American Trails Executive Director. The organization works to advance trails and greenways as a way to enrich the lives of all Americans, to protect our public lands and waters, and to improve communications among those sharing these goals. The vision of American Trails today, says Pam, is of “a network of diverse, high quality trails for all people and a trail within 15 minutes of every home, school, and workplace.”

Why have trails become so important?

“Increasingly, trails are seen as a path to better health, especially for children, who are at risk of developing lifelong sedentary habits,” according to Pam. “Trails also play a key role in increasing environmental awareness, by revitalizing river corridors, as well as proving fun alternatives to driving. And of course, attracting hikers, paddlers, and trail riders brings economic benefits to rural communities.”

Just what is a trail? American Trails defines a trial as: “A trail is a travel way established either through construction or use and is passable by at least one or more of the following, including but not limited to: foot traffic, stock, watercraft, bicycles, in-line skates, wheelchairs, cross-country skis, off-road recreation vehicles such as motorcycles, snowmobiles, ATVs, and four-wheel drive vehicles.” To this list Pam adds that horses and pack animals are also most definitely part of the trails program.

“We are not lobbyists but we do work with all federal agencies involved with trails, as well as state agencies, and local groups,” says Pam who before taking the reins at American Trails had 17 years of trails experience. First, running a guide service; then, as the Parks and Rec. Director in Pine Top-Lakeside, Arizona; and then serving as the AZ state trails coordinator. American Trails seeks to help trails happen by providing one of the world’s largest online resources for planning, building, managing, enhancing, supporting, and funding trails and greenways.

One important source of funding for trails is the Land and Water Conservation Fund. Another major source of funds is the Recreational Trails Program (RTP) in the Federal Highway Administration.

The RTP earmarks a tiny percentage of your federal gas tax for trail projects in every state. The program has allocated $85 million a year through 2014 for sustainable trails. This amounts to $1-$5 million a year for each state. Interestingly, states can opt out of this federal program, and Kansas and Florida have recently declined their piece of federal support. This funding is based on the amount of non-highway fuel used by hunters, fishermen and other outdoor sportsmen, and snowmobilers, but it is available for all kinds of trail work, including volunteers on hiking trails, as well as urban projects.

This may seem like a lot of money, but actually it’s only a small fraction of the annual economy of the outdoor recreation industry, which is worth about $646 billion a year, and which supports 6.1 million direct jobs.

American Trails seeks to connect local users and trail advocacy groups with expertise. Part of the work is bringing people together to share stories of success and failure. They also help make connections with leading resource people through conferences, such as through their upcoming international conference in Arizona in April, as well as making referrals and conducting webinars.

When I read through the American Trails magazine and website, I noted that the people who serve on their boards represent federal, state and local agencies, some local trails organizations, and people with expertise designing, building and maintaining trails. I could not help but wonder, “what about environmental organizations and sportsmen’s groups? Where are they?”

I asked Bob Searns about this. He replied that they would welcome more input and involvement from sportsmen’s groups. He pointed out that some trails are especially helpful for fishing access. In other cases, trails on wildlife refuges where hunting is allowed can keep the wildlife watchers and hunters at a safe distance. Bob said that one of their basic slogans is to “tread lightly” and he noted that sportsmen need to be recognized for their work on picking up trash and keeping campgrounds cleaner than when they found them.

“One of our roles,” he said, “ is helping people with many different ways to use trails – bird watchers, physical fitness, artists, etc. — find ways to get along and work together.”

Talking with Bob, who is based in Denver, I learned that there is an international trails movement. He has traveled to Africa to study their developing trail system and he recently returned from an international conference on trails that was held in South Korea.

“The international trail movement is about 10-15 years old. Representatives from some 17 nations attended the conference, which was held on Jeju Island, a small sub-tropical volcanic island about the size of Maui that lies just off the coast,” Bob said. There is a popular trail that circles the entire island. “Trails are important not only for the health and enjoyment of residents of those countries, but they have definite economic benefits for tourism. Some of the countries who are actively developing trail systems include China, Brazil, Turkey, India, South Korea, Japan, Finland, Canada, Germany, Australia, Israel and the UK, as well as the US. On the final day of the conference we got to walk with over 1,000 Koreans who came to the island for the annual Walking Festival.”

To foster international cooperation, the World Trail Network has been formed.

There are other benefits to trails in addition to fresh air, exercise and inspiration.

“I also see trails as catalysts to promote environmental stewardship. Trails draw people outside so they can discover and/or rediscover how important nature is in their lives, and this encourages conservation behavior,” Bob added.

American Trails’ biennial symposium, which will include many international participants, will be held April 14-17, 2013, at the Fort McDowell Yavapai Nation Resort – Radisson Resort & Conference Center near Fountain Hills, Mesa, and Scottsdale, Arizona. For more details, see the American Trails website.

As Roy Rogers said, “happy trails to you, until we meet again.”