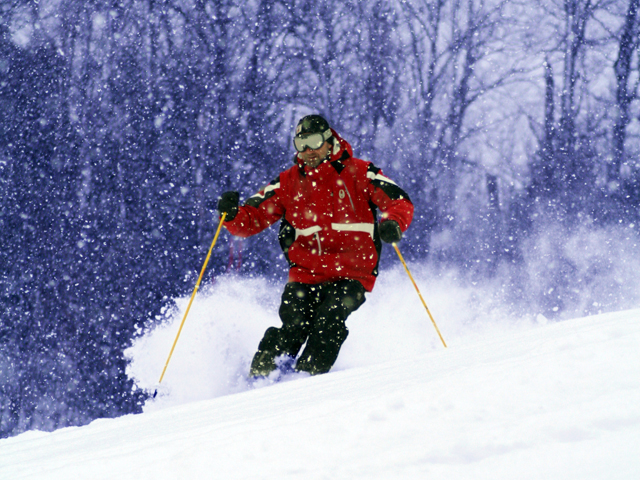 In a month, we’ll have a new year–2013 is all about a clean slate, a blank page, a chance to write a fresh chapter in your life story. For some the pull is to be lean, loved or rich. For others the goal is to gobble up new experiences. Living in Michigan’s Upper Peninsula (U.P.), it’s easy to steer down the adventure road. And here, surrounded by snow, that path usually leads to a ski area.

Open a map and you’ll see the U.P. peppered with places to ski. Travel 30 minutes in any direction and at least you’ll find a trail or a rope tow, or, at best, you’ll park at one of the region’s nine full-scale downhill ski areas offering lifts and a lodge. With so many places to alpine, it’s tough to pick a favorite, so here’s an alphabetical tour by county.

Pine Mountain, located in the city of Iron Mountain, and also famous for its ski jump, remains the only U.P. ski resort where two kids, 12 and under, ski free with a ticketed adult.

The Pine Mountain Ski Jump, one of the best jumping hills that hosts tournaments in the United States is present on site. Image courtesy of Pine Mountain Resort.

They call this Big Snow Country for a reason. An average 17 feet of natural snow falls on this trio of resorts and Indianhead in Wakefield has been taking advantage of that white gold since 1959. Pre-Christmas two-day lift tickets at Indianhead are $55.

Image from Brian Giesen on the flickr Creative Commons

Blackjack will host the national SnoCross December 7-8, and open for skiing December 14.

When it comes to longevity, no U.P. resort can top Mont Ripley’s 77 years in operation. Located on the north side of the Houghton Canal, the ski area belongs to Michigan Technological University, where skiing became a varsity sport in 1941. This season Ripley offers a four-day pass for $110 and starting on Family Day, January 6, Sunday lift tickets are $25.

Ski Brule in Iron River ranks as the Midwest’s favorite resort five years in a row. First to open and last to close, this family-friendly full service resort knows how to make memories on a family ski vacation. They also know how to make ski vacations affordable. Get a free “Friends & Neighbors” card and cash in on lodging discounts.

Mount Bohemia wins the coin toss for terrain. Located near the tip of the Keweenaw in the suburbs of Lac la Belle, this mountain has been dubbed the Crested Butte of the Midwest. Mother Nature takes care of snow making, and surrounded by Lake Superior, she does a pretty good job dumping an average 273 inches of fluff–that’s over two stories of snow. Don’t come here for the grooming; do come for the powder shots and chutes, drops and scenery. Bohemia’s 85 runs plunging from 900 vertical feet rank it as one of the ten undiscovered ski resorts in the world. Sorry, but still no beginners allowed.

Marquette Mountain’s snowmaking doubled with the addition of 14 new SMI Wizard guns. Crews have also been busy cutting nine new gladed runs on the 147 skiable acres. Known for the wildest terrain park in the peninsula, this college town ski hill will host the Midwest Extremes on March 22.

Whether you want to charge down the front slopes, free-heel the back country or snowshoe the lantern trail after dark, this state-owned 60,000 acres of wilderness makes Porcupine Mountain in Silver City a ski area like no other. Since 1990, Down Wind Sports has hosted the Midwest Telefest at the Porkies and this year the fun is scheduled for February 8-10. This winter more than ever U.P. ski areas offer packages and programs to entice you outside and gliding. So banish the excuses and buckle up. Slopes from the Copper Country to Iron County are calling you to come make tracks.