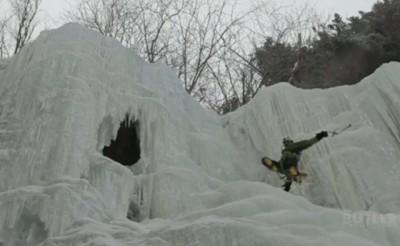 Jeffrey Butler didn’t intend on making a film about an ice climber’s mistake, his serious fall and the incredible teamwork and rescue that followed on a climb up Frankenstein Cliff in New Hampshire. Yet when it happened, Butler ran with the concept and created a film about the “emotional, human drama side” of all those serious injuries we read about in the news.

“Fall started out as just another ‘tripumentary’ – in fact it was more of an investment of my friends in me. And it would have been ‘just another video’ except that it all went wrong. Not totally wrong. Just a whole lot more wrong than any of us ever expected,” the filmmaker wrote in the description of his 15-minute film Fall. From Glory to Grace.

Many climbers in the community have voiced their critique of the climb and that the fall could have been avoided, but this film isn’t about what could have, should have, would have been, but rather about human error and the powerful experiences that shake us into forever becoming a different person. Watch the film in its entirety below.

Fall. from Jeffrey Butler on Vimeo.

Image screenshot of video by Jeffrey Butler on vimeo