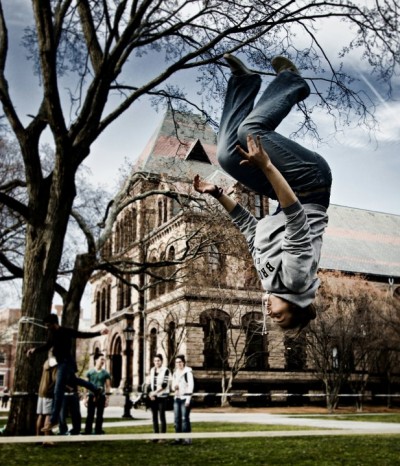 “You need a lot of determination,” said the pro slackliner currently living in Providence, Rhode Island. “For me, my background is in gymnastics with its twists and flips. That’s helped a lot.”

Core strength, balance, flexibility and creativity go into slacklining, the sport of traversing a narrow nylon webbing strung between two points often low above the ground.

A bit like combining tight-rope walking and a trampoline, slacklining is an evolving sport that’s being practiced everywhere from college greens to over rocky gorges. Those who tower above it all are highlining. Cross water? That’s waterlining. Going for length, like 150 feet or more? You’re longlining.

Top trickliners—those who flip, twist and more—are in Boston over the coming days for the World Slackline Federation World Championships held at the Seaport World Trade Center in conjunction with the Boston Ski and Snowboard Expo Nov. 8-11.

One of the nation’s best, Bowe, 23, started slacklining at Rhode Island’s Brown University after she saw someone else do it on campus. The Cape Cod, Massachusetts native soon won the Gibbon Games East International Slacklining Competition and was the 2011 Queen of Slackline Champ, an online competition with the 2012 games now under way.

Bowe says there are a lot of skiers and snowboarders who use slacklining for cross training.

“Slackliners take ideas from sports like snowboarding and skateboarding because of their tricks,” she said.

There is also a link between slackliners and rock climbers as slacklining’s roots come from climbers in Yosemite National Park setting up lines across mountainous real estate. Slacklines also are commonplace at indoor rock gyms.

Slacklining got its mainstream jolt in February during the Super Bowl halftime show when Andy Lewis bounced around for about 30 seconds while wearing a toga during Madonna’s performance.

According to an article in the New York Times following the halftime show, there are between 5,000 and 10,000 slackliners across the country. Winners of top slackline competitions can get about $3,000.

Getting set to slackline doesn’t take much. A novice line, depending on length, is about $75. Having padding, like mats, underneath help ease the falls.

“Slacklining has really exploded in the past year,” said Emilio Torres, vice president of sales and marketing for Gibbon Slacklines USA in Boulder, Colorado. “Originally it was a skateboarder, snowboarder,  X Games type of teenager. We’re now expanding to kids as young as kindergarten and all the way up to senior citizens.”

Torres says tricklining is seeing the biggest increase among the genres. According to Torres, longliners tend to travel between 150 and 1,000 feet while highliners can do anything from 100 feet to 3,000 feet high.

“There is a different mental toughness to each aspect,” he said. “They all use core strength, balance and mental focus. A lot of Olympic calibre skiers use slacklining in their basic cross training.”

Torres says learning to slackline is like learning any new thing like bicycling or swimming. But once you get it, progress is quick.

“Some of the world’s best competitors have only been slacklining for a year or year and a half,” he said.

For the World Championships in Boston, slackliners have accumulated points for the season. The top eight compete with athletes coming from the U.S., Asia, Europe, and South America.

Slacklining has been a demonstration sport on the adrenalin sport Dew Tour with stops in Ocean City, Maryland and San Francisco. Next up is Breckinridge, Colorado December 13-16.

The slacklining will be done outside, over snow.

“You can slackline over snow,” he said. “It is very common.”

And for a competitor like Bowe there are always new challenges.

“I think the tricks are getting crazier,” she said. “This is a really exciting time to  be part of a sport that is growing so much.”