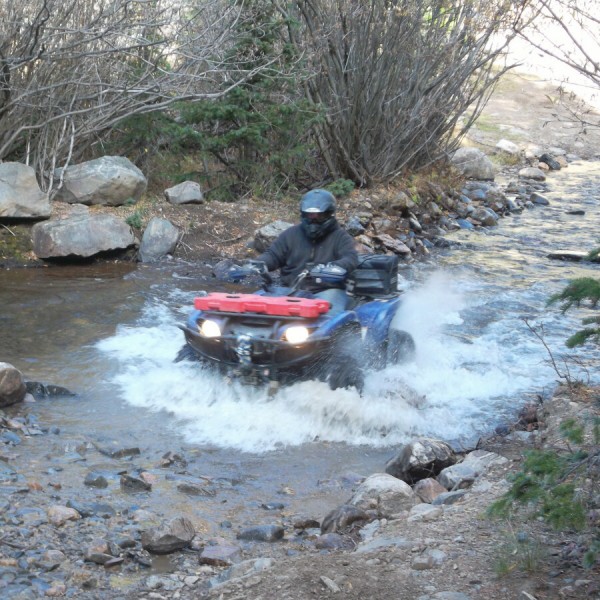 It was a brisk morning in late September and I was heading up I-70 out of Denver to ride the trails around the Argentine Pass/McClellan Mountain area. This area is about nine miles southwest of Georgetown, Colorado and I was looking forward to this ride because I had not ridden this area before.

There were six of us for this ride and I have been on several rides before. The staging area is at about 9,500 ft and today we are going to climb to over 13,000 ft. After we got unloaded and greeted each other for a bit we were ready to hit the trail at about 9:30am.

The beginning of the trail is the only treed section we would ride and basically runs parallel to some power lines. We passed several dispersed campsites and a couple of stream crossings before reaching the timber line. Once above the timber line you could see several remnants of old mining sites, including the Waldorf Mine and the Santiago Mine. We followed the old railroad grade to the top of McClellan Mountain. As we stood at the top admiring the view, the wind was blowing up the northern face and it was very cold looking over the edge. But when you stepped away from the edge the temperature warmed up significantly. We rode back down the old railroad grade and over to the Santiago Mine which still had many of the structures still standing. Just below the Santiago Mine is the site of the Waldorf Mine and the area where the town of Waldorf once stood.

We made our way over to the basin made by Argentine Peak and Mount Wilcox. Mount Wilcox was named after Captain Edward J. Wilcox, a prominent figure in the Georgetown area who played a vital role in the development of the Waldorf Mine and the Argentine Central railroad. After enjoying the views of the basin we rode up to Argentine Pass. On the ride up to the pass it started lightly snowing. At the top of Argentine Pass the trail turns into a hiking and mountain biking trail down the back side. Like most of the mountain passes in Colorado the view was spectacular.

There was a jeep and another ATVer at the top. We saw a few others on the trail but for the most part we had the trails to ourselves. On a warmer day I could see this area being very crowded with OHVs, ATVs and motorcycles. We arrived back at the staging area around 2:30pm. It was a good day of ATV riding and we all were prepared for the colder temperatures. The Argentine Pass/McClellan Mountain area only has about 25 miles of fairly easy trails but the views and the sites make up for the lack of challenge the area has.

This article originally appeared on CampingATV.net and is republished with permission.