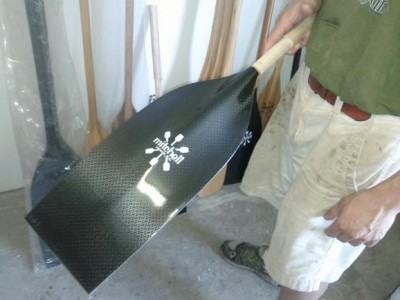 A paddle blade similar to the ones used by the 2012 Olympic C-2 team.

Earlier this week, at the London Olympics, the American team competed in the double canoe slalom. That’s when two men kneel inside a kayak and work together to navigate an obstacle course on whitewater rapids. If you watched this on NBC, you might have caught a glimpse of a pair of paddles made in New Hampshire.

Peter Mitchell and his father, David, have been making paddles for decades. The company started in New Hampshire in 1975, before Peter was born.

And they’ve made paddles for Olympians in the past…including the Gold medal winners for men’s double canoe in Barcelona and for women’s kayak in Athens.

Today, the kayaking tradition is strong. Using techniques that have been perfected for generations… going all the way back to the Inuit tribes of the North Atlantic, Mitchell crafted the paddles for the U.S. Olympic C-2, or double canoe team.

They are using some of our whitewater canoe paddles. They are a carbon blade, it’s actually a carbon over a wood core and then it’s also a carbon shaft. And they’re slightly different from what we normally do, built to the specs of what those guys were looking for.

And Peter’s father has a good idea what an Olympian might be looking for. He raced in the 1972 Munich Olympics.

Today, Peter Mitchell is the sole craftsman of Mitchell Paddles and it’s a craft he learned from his father. David grew up in England, and met Peter’s mother Peggy, who was a competitive kayaker in her own right, at a racecourse in Italy.

Kayaking has always been a central part of David’s life.

I think it was a family thing. My father and older brother built a single kayak and later on, after my father died fairly young, my brother built himself a double canoe so I inherited the single.

How did you start getting into paddle-making?

All we could get in England were flat-bladed plywood paddles on an aluminum shaft. So the best paddles were made in Germany by a person named Toni Prijon, who was actually a world champion in whitewater racing.  I asked him if I could go and work with him for a while and he said I could.

After competing for years, David coached U.S. teams in the Barcelona Olympics and he and his wife trained several junior world champions. The IOC also asked David to design the slalom courses in Atlanta and then in Sydney. He did, and apparently he did it too well because several teams complained that he made the courses too difficult. David lost the taste for Olympic slalom design after that. When he received another offer to design the courses in the Athens Olympics, he declined. When they set up shop in New Hampshire, three years after the Munich Olympics, David made the paddles while Peggy ran the business. Now that his son has taken the reins, David’s retired. And Peter is sticking with it.

I definitely enjoy what I do. There are different aspects of it. There’s the making of paddles which is quite nice. There’s the running of business which is… less nice than making paddles, but overall I couldn’t imagine doing anything else with myself.

This story of family legacy is not unique to the Mitchells. The two U.S. Olympian kayakers who used Mitchell’s Paddles inherited the sport from their fathers, who were former training partners. And the German paddle-maker who trained David in the art? His own son went on to win the Gold at the 1985 World Championship.

The Men’s Olympic C-2 team, Eric Hurd and Jeff Larimer, who used Mitchell’s Paddles, did not make the qualifying time in their first race on Monday. The Double-Canoe Semifinals and Finals will take place next week.

This story by Ryan Lessard originally appeared on New Hampshire Public Radio and is republished with permission.