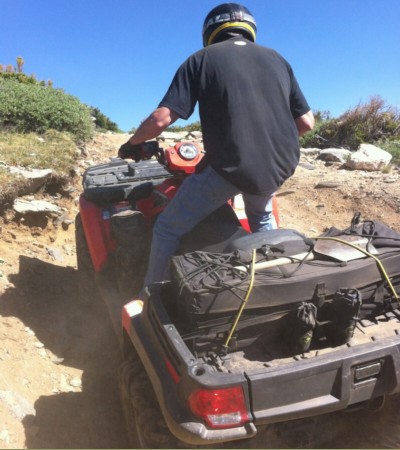 If you live and ride ATVs in the state of Colorado, you know there are plenty of areas to ride and see some beautiful scenery. There are a couple of areas that are on a “Must Ride” basis if you are serious about riding ATVs. One of those areas is the Red Cone/Webster Pass area and this weekend in June I am out early. This is my story about Riding Red Cone Pass.

This is actually my first time riding Red Cone Pass. I had heard about it from others that it was a big loop with a few challenging areas and a steep decent off of Red Cone. But as I was about to find out, there is much more to this area than just that.

The others showed up shortly after me and we were ready to ride by 9:00am. The trail up over Red Cone is a one-way trail and starts off at about 9,800 feet with a rocky incline up Sawmill Gulch, which was a very fun part. The trees started getting thinner as we approached the timber line.

The trails were very dusty so an ATV dust mask is highly recommended. Luckily there was only three of us, a group any larger would have made the dust pretty bad. The higher we went in altitude the more wind there was, which also helped with the dust.

Once we got above the tree line you could easily see the trail winding up the mountain to Red Cone. Once on top of the first hill on the way to Red Cone we experienced the first of three steep descents and this one was the steepest. Going down I took advantage of the Engine Braking System (EBS) on my ATV to control my speed instead of the brake.

You would not want to roll off of this hill because it would be a long time before you stopped rolling. The views from up there were spectacular as we made our approach to the red dirt cover hill called Red Cone (12,600 Feet). The wind was really blowing on top of Red Cone Pass.

Coming off of Red Cone was the third decent that took us down to a fork in the trail. To the left was the way back to the staging area via the Handcart Gulch trail which completed the loop. Taking the trail to the left at the fork went to Radical Hill and Montezuma.

We took the trail to the left and rode up Radical Hill, a very fun, rocky, and steep incline with switchbacks. Once on top of Radical Hill (12,600 feet) you could see more trails. We spent the rest of the day exploring many of the trails and even saw some of the many mountain goats of the region. We eventually made our way back to the Handcart Gulch trail and back to the staging area by 3:00pm. We had covered over forty miles and only scratched the surface of what the area has to offer. I highly recommend this area as a “Must Ride” area as I had a great time and will definitely be back for more Riding Red Cone Pass.

This article was republished with permission by ATVCamper.