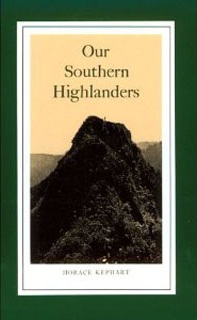 In Our Southern Highlanders, Horace Kephart has painted a brilliantly colored picture of what life in Southern Appalachia must have been like. First published in 1913 and revised in 1922, the book offers intimate yet unaffectionate insights derived from the perspective of a man who has been there, living among the mountaineers in the early parts of the 20th century. Much of this intellect undoubtedly came to form from his rural upbringing in Pennsylvania and Iowa, his time spent abroad and perhaps most importantly, his career as a librarian.

Before moving to Hazel Creek in Western North Carolina, in 1904, Kephart was Director of the St. Louis Mercantile Library where he often used the vast assortment of knowledge at hand to write about hunting and camping. These very interests would later solidify his need for a solitary existence and propel him to move to the Appalachian Mountains where he wrote this wonderful book, contributed in founding the Great Smoky Mountain National Park and the Appalachian Trail, among many other things.

The book itself is a solid foundation, a piece of history if you will, and should be read by anyone interested in the Appalachians. From a personal standpoint, I have hiked on the Appalachian Trail and even passed close to Hazel Creek without ever hearing the author’s name or knowing his contributions to the ground I walked. It appears Kephart had the notion to not only inform his readers of this mountainous area of the Eastern United States and its inhabitants, but to also entertain with anecdotes devoted to whole chapters such as, “A Bear Hunt in the Smokies,” “The Snake-Stick Man” and “A Raid Into the Sugarland,” just to name a few. These journeys take the reader up and down the mountains, always on the author’s hip, as he chases black bears with “characters” like Little John Cable, the hunchback Cope, Granville and “Doc.” Sitting in the ramshackle of a cabin waiting out a storm where “Squalls broke against the mountainside, hither and yon, like the hammer of Thor testing the foundations of the earth.”

Such descriptive writing leads me to believe that Kephart was a man who, much like Hemingway frequently declared, did not write about his subjects until he knew enough to write about them. His reader also becomes his viewer, seeing and feeling “a bright morning in mid-August, with a portent of sultriness here in the river valley, but of cool airs and clear prospects on the high ranges…..”

In conclusion, I would highly recommend this wonderful book from The University of Tennessee Press to anyone interested in the aforementioned region. Even if you don’t live near the arduous peaks of Clingman’s Dome or Mount Mitchell, Our Southern Highlanders is capable of roping you right into the words on the page, living what Horace Kephart so elegantly described. To have written this book and lived among the mountaineers, I could only imagine the character that Horace Kephart himself could have been.